Ethiopian Airlines denies it tampered with flight records after crash 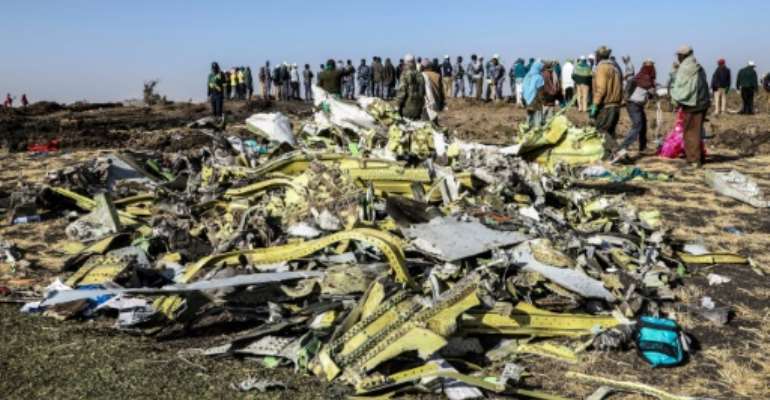 The Ethiopia Airlines jet nose-dived into a field outside Addis Ababa, killing all 157 people onboard. By Michael TEWELDE (AFP)

Ethiopian Airlines on Wednesday denied whistleblower accusations that it tampered with the maintenance records of the Boeing 737 MAX jet which crashed in March, killing all 157 people on board.

The accident, in which the plane nose-dived into a field outside Addis Ababa, led to the six-month grounding of the aircraft model as numerous reports faulted an automated control system which pushed the nose of the jet sharply downward.

The same system error was blamed for the crash of an Indonesian Lion Air plane in October last year which killed 189 people.

However Ethiopia Airline's former chief engineer Yonas Yeshanew -- who is seeking asylum in the United States -- highlighted dubious maintenance practices and corruption at the fast-growing airline, in an article carried by the Associated Press news agency.

According to the AP, Yonas said someone from the airline had entered the maintenance record system after the crash. He said he did not know if anything was altered, but referred to a history at the company of falsifying records and signing off on dodgy maintenance and repair jobs.

Ethiopian Airlines said in a statement emailed to AFP that directly after the crash "all relevant hard copy maintenance records of the aircraft involved in the accident" were sealed, stored in a secure place and delivered to investigators.

"All maintenance activities done and pilot remarks reported on the aircraft before the accident are recorded on hard copy documents. Hard copies are the official records of aircraft. The allegation that pilot and technicians' notes were changed is completely false," the airline said.

The airline has presented Yonas as a "disgruntled employee", while he told AP he fled the country after being arrested and interrogated for talking to journalists about his concerns following the crash.

Ethiopian Airlines is the biggest carrier in Africa and has rapidly expanded, regularly adding new routes to its already busy schedule across the globe.

On Tuesday night Ethiopian Airlines jet made an emergency landing in Dakar with one of its engines on fire, though all 90 passengers and crew were unharmed.