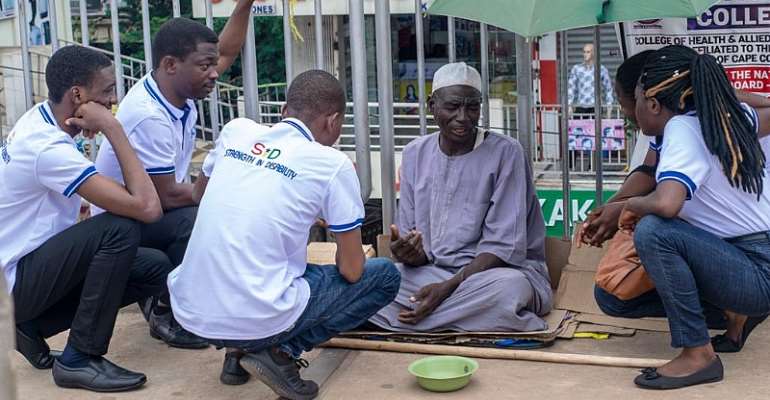 As part of its disability advocacy endeavour, Strength in Disability KNUST on Saturday, 21st September 2019 embarked on an outreach to the streets of Kumasi around the Kwame Nkrumah University of Science and Technology (KNUST), in the Oforikrom Municipality.

The outreach saw team members interacting with persons with disabilities (PWDs) who normally beg on the streets for survival. The engagement was to enable the team ascertain the challenges they face and also show them there are people who care about them.

A mobility-impaired woman who gave her name as Josephine Arthur, a single parent who has to seek alms from passersby in order to cater for her needs and that of her child shared her story as the team interacted with her.

"My mother used to take good care of me until she died. My family has abandoned me thereafter. I have to carry myself all the way from where I reside to the overhead footbridge to seek alms."

When she was asked about the 3 percent District Assembly Common Funds allocated to persons with disability (PWDs), she indicated that she was given money from the DACF twice and then asked not to come for the money anymore. She even disclosed that sometimes monies from the DACF intentionally go to the wrong people: relatives of those supposed to disburse the monies to them.

She explained further that she was promised a refrigerator by a different agency in her hometown to support her sell sachet water which she could do, but that did not materialize. She again said that she used to trade in tie and dye but sales were not good enough. As to whether market was poor for her because she's a PWD, 'only God knows.'

"I wish that someone will be able to help me cater for my only child. Where I will lay my head is even hard for me," she added.

She opined that government should help provides jobs for PWDs in the country to reduce the poverty and high dependency rate.

The team again met a young man who gave his name as Kweku. He suffers from epilepsy and has mobility challenges. He told the team he became epileptic at the age of nine.

Epilepsy is a medical condition in which the sufferer experiences seizures (or convulsions) and blackouts.

Kweku indicated that he currently lives with a visually impaired fellow, after being left to his fate by his family.

He explained that though his visually impaired friend does some work, he (Kweku) is not able to join him because of his occasional seizures. He wishes to start a shoe-selling business when aided financially.

He believes his condition is not natural and that someone caused his current situation. He hopes to continue schooling and become a medical doctor one day.

He added that some children usually make fun of him and call him names (a typical example of stigmatization). He said he really wants to be free of his condition so he can realize his dream.

The team finally met Osman, who is from Niger but now residing in Ghana, a man impaired in one lower limb. Though there was a language barrier trying to comprehend his speech in Hausa, the team managed to interact with him with the help of a team member.

Mr Osman explained that he's not been able to find work to do and hence resorted to begging for alms on the Tech Junction overhead bridge.

We humbly call on district offices in the country to ensure that the funds allocated to PWDs get to them. We also beseech Government, NGOs, etc. to do more to help PWDs get better livelihood and firmly protect their rights as enshrined in the Disability Act 2006.

About SID
Strength in Disability (SID) is an initiative of students of KNUST and other institutions in Ghana primarily geared towards educating the public on issues of disability and other relevant matters, showing society to look beyond disability and reach for ability. It particularly features a movie on disability which will be premiered soon.

We appeal to all well meaning individuals and organizations to support this noble endeavour. To assist SID, please contact 0243686897 or 0501654514. God bless you. 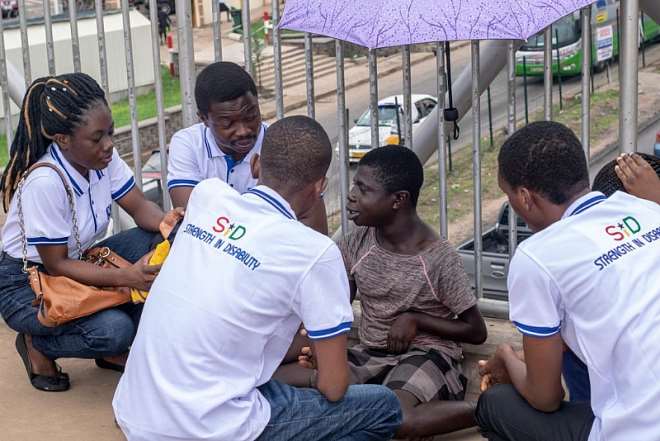 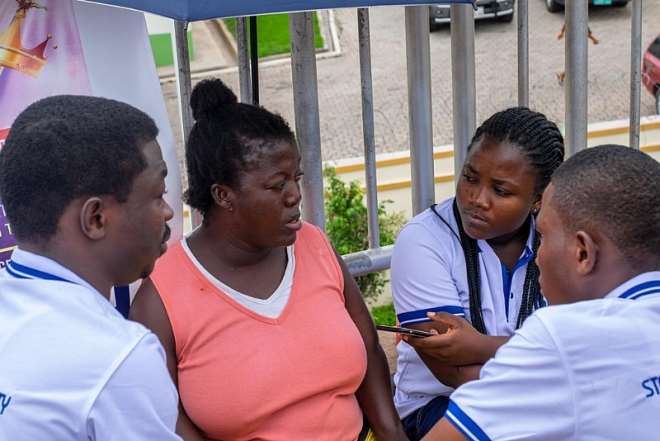