Dr. Ibrahim Anyars, His Geniality And The Success Story Of NABCO 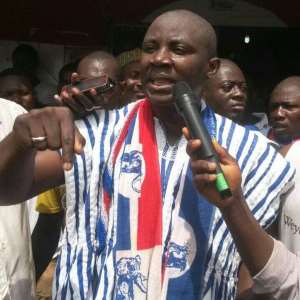 Every man has a flaw. And as the elders say, none is perfect. Regardless, the flaws that all men have to face and the imperfections that encompasses man roundabout, there is always one amongst the many who stands out. It is this man who stands out or exhibits extraordinary traits that we refer to as a leader. Leadership is therefore not the holding or occupation of a space called the office. Rather, it is the ability to exceed the common expectation, degree or seal.

An understanding of this as that which is true leadership will lead one to understand why others occupy offices but cannot be called leaders. It will also be enough to give clarity on why some group of persons hold no office yet are accorded the honours of leadership. Lastly, it would also give us an appreciable understanding of why many have failed in office whilst others have succeeded as leaders.

Prior 2016 general elections, the Nana Addo Dankwa Akufo-Addo led NPP gave hope to the majority of Ghanaians who had already lost it due to the bungle performance of President John Dramani Mahama and his NDC.

One of such hopes delivered to the people was the promise to drastically reduce graduate unemployment and in the long term to break the continuity of any such organization as 'Unemployed Graduates Association'. Indeed, this vision became reality few months after the swearing into office of H.E Nana Addo Dankwa Akufo-Addo as President of Ghana. The office of the Nation Builders Corps (NABCO) was finally established.

At the establishment of NABCO, the President needed not only to appoint a party man to occupy its affairs. He needed but a leader as expounded earlier to coordinate the directorate. There was no man that could be entrusted with the leadership of the Nation Builders Corps but Dr. Ibrahim Anyars.

Honestly speaking, Dr. Ibrahim Anyars is one of the appointees of this current government whose character and relationship with the masses has remained positive till date. Any person who has had the opportunity to meet and interact with him would attest that he is not only benign but also honest, dedicated, firm and fair. This is what leadership is about and Dr. Ibrahim Anyars has successfully lived to the true meaning of the concept of leadership.

It is therefore not surprising that under his watch as CEO of the Nation Builders Corps (NABCO), the program has made significant strives regardless any obstacles that we may all have known especially with arrears rectification. As earlier noted, leadership comes with its own challenges yet the man who prevails the challenges is who becomes the leader.

Indeed, the true leader is the man who keeps shaping and reshaping the obstacles to fulfill the vision. This, Dr. Ibrahim Anyars, has done, is doing and shall continue to do as National Coordinator of NABCO. Acknowledging his quality leadership, geniality and successes chalked so far as CEO or National Coordinator of the Nation Builders Corps is worth it. As much as he owes us and the nation a duty of service, we also owe him an appreciation for his affable service.