Happy Birthday To You Kwame Nkrumah 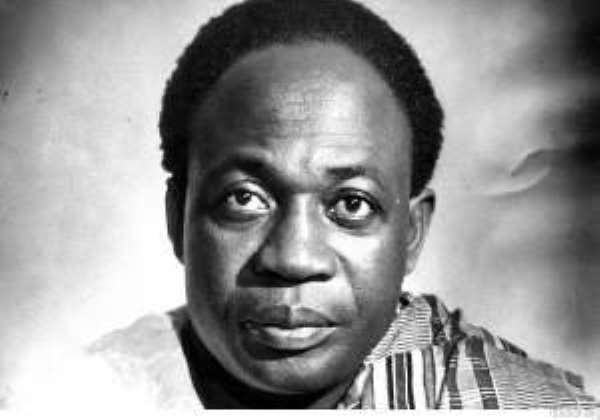 Not only today, or the very 21st day of September that I celebrate the Africa's greatest, Dr. Kwame Nkrumah.

Personally, alongside devotees to the revolution I lead, we wake up Nkrumah, work Nkrumah, preach Nkrumah, and sleep Nkrumah.

Nkrumah and Nkrumahism is the corner stone of the battle we've started to wage - seeking for real *FREEDOM* for Ghana and Africa.

This does not imply that the other giants in the African emancipation struggle is not recognised by myself and my disciples. We do. But, without doubt, Nkrumah and what he stood for need not be allowed a stillbirth or a premature death, as did the hero Nkrumah himself.

Today, I believe, celebrating his 110th birthday, Dr. JB Danquah has paid a fraternal visit to Kwame Nkrumah on the Holy Mountain of Africa, where the departed saints assemble to examine the unfinished work our detractors forced them to leave stunted.

Not only he JB, who when living had been forced to make foes with the man whose legacy attests to it that he was ahead of his time, salutes Nkrumah on this day. There would definitely be Busia, and even Kotoka who with boldness, not fearing the Saint Nkrumah, and was bought by our enemies to try many times without success, to literally kill him.

Yes, they would be among the righteous who will join hands in praying for forgiveness to themselves, as they were overcome by the power that be, and divided than united for progress.

On the same Pantheon, the Holy Mountain, I still see as guests: the recent departed Mugabe, the Paradise builder Gaddafi, the peacemaker Mandela, the worshipped Emperor Haile Selassie I, and the action-oriented Sankara. Meeting in brotherhood, their mission would be: "Happy birthday to you comrade Nkrumah. It's good our souls live, though our bodies killed, we're not leaving this place till our beautiful spirits influence the determined youth of Africa to take up the mantle in fulfilling the African dream.

Being present in my mind's eye and ears, I could see and hear JB Danquah telling Nkrumah: "I regret it I couldn't figure it out early the chasm of hatred those who wanted to balkanize us created between you and me, and my actions towards you sending me permanently in jail, dying there with all the wisdom the Maker blessed me with to make Ghana great again".

To that, Nkrumah's response would be: "JB, I should have known better, as a prophet, I saw it coming, but my resistant to it was overcome by the beguiling power of our detractors, the imperialists, the neocolonialists who capitalised on the ignorance of our own people to polarise our front as we fought for the common goal of building the Great Africa".

The conversation between the two, as tears stream down their cheeks, is telling we the living today that: we can only get to the promised land, achieve the goals they set for Ghana and Africa, so our independence be meaningful, when we rise above political and tribal conveniences to unite for common course.

It was first called Founder's Day, and the whole of Ghana commemorated that nominally, without institutions that writes to teach about our gone heroes in our children's textbooks, without making idols in European sailors and elites.

Whatever it's, it is the greatest African of the millennium that we celebrate.

We honour him, and immortalise his ideas, values, and principles.

And to you Mr. President, Nana Akuffo Addo, history will celebrate you not for letting Ghanaians rest a day because it was the day Nkrumah was born.

But, myself and my revolution, Ghanaians and Mother Africa, would enshrine your name in the Book of African Saints if you don't let Nkrumah's dreams die.

Your campaigns and actions tells us that, though without success, your concern is only geared towards financial emancipation, to the neglect of emancipating the Ghanaian, the African, from mental and moral enslavement.

There's time for everything Sir.
Nkrumah lived his time, and what he churned out is still envied by today's generation.

The youth of today are expecting from you where you'll thrust them in the next five decades to come, vis-à-vis what your generation benefitted from Kwame Nkrumah.

Soldiers of the new revolution to freeing Africa, as in the case of Miss Firdaus Mohammed who seeks to lead the National Union of Ghana Students (NUGS) as the International Relations Secretary, we start with building on Kwame Nkrumah's unfinished better education he sought for the African.

Our alliance with those abroad would be win-win.
We aren't going to allow ourselves to be shortchanged again.