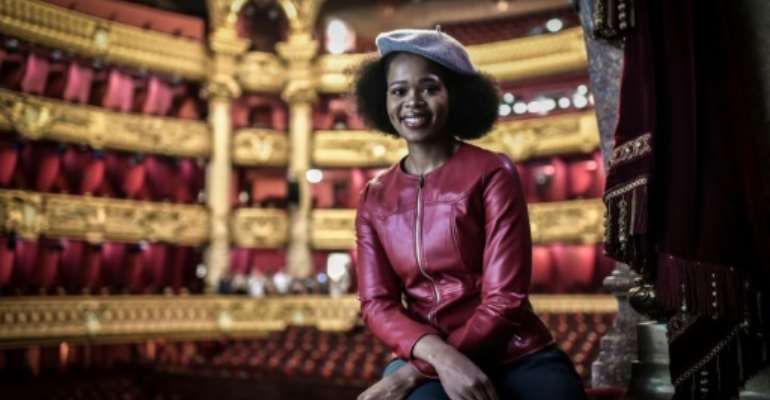 South African opera singer Pretty Yende, who has enjoyed a meteoric rise over the last years, has hit new heights in a Paris production of "La Traviata" where the heroine is a social media influencer destroyed by the same society that propelled her to fame.

In the new Paris Opera version of Giuseppe Verdi's masterpiece, the heroine Violetta is an internet celebrity like Paris Hilton or Kim Kardashian, with her own brand of perfume and millions of followers.

Yet her fame turns to despair and solitude as she is forced to abandon her love for Alfredo -- and the smiling emoji faces turn to tears.

Greeted with a standing ovation on opening night, the 34-year-old Yende, who was born in the small South African town of Piet Retief, conquered the vocal demands of Violetta in the first time she has taken on the emblematic role.

But she also proved an inspired choice to star in the typically bold production by the in-demand Australian theatre, film and opera director Simon Stone, knowing all too well the pleasures and pitfalls of social media.

"Five years ago many people wanted to offer it to me but I knew I wasn't ready," Pretty Yende says of her performance as Violetta. By STEPHANE DE SAKUTIN (AFP)

In Stone's production, Violetta is a social media star with 147 million Instagram followers who shower her posts with likes, and even has her own perfume brand named Villain.

She and her lover Alfredo (French tenor Benjamin Bernheim) communicate obsessively via their phones using WhatsApp, with a revolving square screen showing their abundant use of emojis and selfies.

"We are always told to show ourselves strong, and then we end up suffering alone," Yende, herself a keen user of Instagram with over 30,000 followers, told AFP as the production got underway.

"I refuse to keep quiet about what it means to do what we do. I started sharing things and most people were writing me saying 'thank you for saying that because no one is saying what it takes.'"

She also took an open approach "because I was trying to save myself from ending up competing with the perfect Pretty Yende on Instagram".

The soprano decided on an opera career after hearing Delibes' Flower Duet on a television advertisement at home. She then won a coveted place at the La Scala Academy in Milan.

Yende, who has won acclaim for various roles at the Metropolitan Opera in New York, the Bayerische Staatsoper in Munich and London's Royal Opera House, said she was right to hold off until now before taking on Violetta.

"I feel I waited just enough. Because I've been offered the role many times. Many, many times. Like five years ago many people wanted to offer it to me but I knew I wasn't ready."

"Not because I couldn't sing it -- I probably could have winged it -- but it would have cost me."

Yende insisted that the interactions on social media have helped rather than harmed her as she made the difficult transition from small-town South Africa to training at one of opera's most austere institutions, and then stardom.

"I needed something that could inspire me. And so I started making quotes and sharing quotes on my Facebook and on my Instagram and people started saying, 'Oh my God, I needed to hear that!'"

Yende lavished praise on Stone, saying that despite the challenges of his sold-out production, she could "immediately connect" with him.

Other scenes take place at a Paris kebab joint called "Paristanbul" and a coworking cafe.

"It's been the most inspiring weeks of my entire 'Pretty Journey' -- hashtag! -- I have never been so inspired by a director before," she said.

Despite some isolated boos and grumbling on social media about Stone's update, reviewers praised the boldness of the production and in particular the quality of Yende's singing.

"The director hits the mark by shifting Verdi's masterpiece to the time of Instagram, WhatsApp and coworking spaces," said online music review Revopera, describing the "freshness, brilliance and agility" of Yende's singing as "sensational".

La Traviata runs at the Paris Opera until October 16 and will be shown on a live relay in cinemas around the world on September 24.