Donkorkrom: DCE Fetes Kids On ‘my First Day At School’ 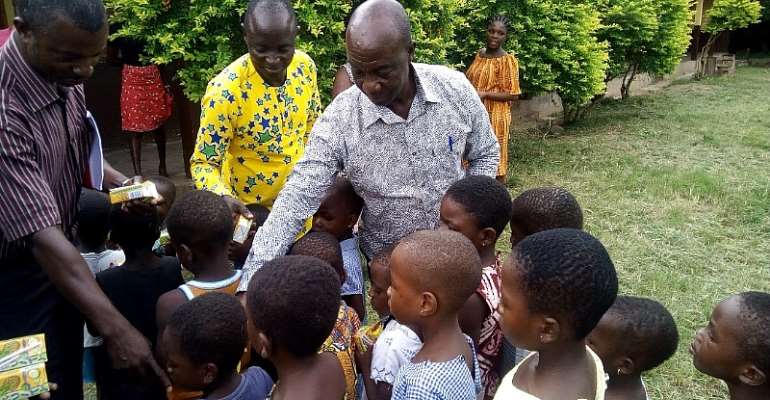 Mr Kena (in white) giving the kids drinks and biscuits

The District Chief Executive for Kwahu Afram Plains North District, Mr Samuel Kena has applauded the idea behind the annual observation of ‘My first day at School’. He said, the idea to motivate the kids, as well as increase enrollment, was laudable. The memories of such days according to the DCE are forever etched on the minds of the children entering kindergarten and primary schools respectively.

The DCE made these comments during his visit to some selected schools in the district to observe the day. The DCE was accompanied by officials from the district offices of the GES and Health. This year’s observation saw the medical screening of the new entrants. The screening carried out by the District Health Office was to identify kids with medical or physical challenges so that special attention are given to those kids in a way that will not compromise their education.

‘My first day at School’

Mr. Samuel Kena said the District Assembly shall very soon commission the completed Kayera KG School. The DCE, a former District Director of Education appealed to the teachers to be hardworking as the attainment of the dreams and aspirations of the kids rests on the efforts of them.

The DCE presented biscuits and drinks to the kids and urged them to take their lessons seriously and become what they aspire to be.