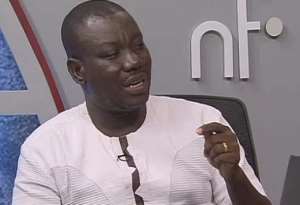 Gabby Asare Otchere-Darko, please stop the hatred and ignorance and advise the 74-year-old man and his family to stop stealing our money.

I woke up to a jaundiced and an ignorance-laden article purported to have been issued by Gabby Asare Otchere-Darko and later heard same being discussed extensively on Citi FM. The article is captioned; ‘How Dr Johnson Asiamah gave needless Ghc860 million liquidity support to UT Bank to cover up debts of Ibrahim Mahama companies”. At the end of the empty article, he attached an internal memo purporting to have emanated from the Bank of Ghana (BOG) and which he believed, arms him to issue such a piece. In recent times, I have had cause to doubt the expertise of Mr Otchere-Darko and his appreciation of finance and although I have long resisted the temptation of coming to that conclusion, the content of the article leaves me with little option than to respond to him.

In the said article, Mr Otchere-Darko in his attempt to find fault where there is none claimed that UT Bank used liquidity support to cover up for loans taken. The curious question is how does liquidity support to a bank help cover up for loans on the books of that bank? Clearly, this is the kind of financial engineering Gabby and his cronies know best as evidenced in how they managed to procure the now infamous fake insurance guarantee for the embattled Power Distributions Services Limited (PDS).

Mr Otchere-Darko ought to know that the Bank of Ghana is a ‘lender of last resort’ in its functions to develop, maintain and strengthen the stability of the financial system in accordance with law. Section 46 (1) (h) of the repealed Bank of Ghana Act, 2002 (Act 612) (the operative law in May 2016 when the liquidity support was given to UT Bank) clothes the BOG with the powers to extend liquidity support to the banking sector as follows "grant, on the conditions determined by the Board, advances to financial institutions for fixed periods not exceeding three months against publicly issued treasury bills of the government maturing within ninety-one days of the issue." Therefore, as a lawyer, one would have expected Mr Otchere-Darko to have backed his analysis with the relevant laws that the BOG actions at the time broke but as was to be expected, he failed to mention any.

Since additional knowledge is not a crime, let me remind Lawyer Otchere-Darko that until 14th September 2016, when the amended Bank of Ghana Act was assented to and became law, Act 612 of 2002 was the operative law on 12th May 2016. And that made it legally permissible and in fact duty bound by BOG to provide liquidity support to banks in need of and qualified to receive same. It is important to recall that UT Bank at the time was faced with serious shareholder disagreements, with the International Financial Corporation working hard to resolve it. The BOG was aware of investors who expressed interest in acquiring UT Bank and was working to help improve UT Bank to be acquired to enable the Ghanaian tax payer recoup its funds and not the hurry with which BOG collapsed it. The Republic Financial Holding was willing to acquire the bank on condition that BOG will ring-fence its liquidity support for a period but Dr Addison refused this proposal and rather collapsed the bank. This led to BOG writing off Ghc860 millions of tax payers' money. It also caused Government to pump additional GHc1 billion of tax payers money down the drain. While Mr Otchere-Darko talks makes a mountain out of an ant hill, grievous malpractices are going on that should rather have caught his attention. Under Dr Addison, huge sums of liquidity support have been extended to banks.

Since 2017, and as late as 2018, Bank of Ghana has been injecting a lot of liquidity support to ailing banks, including so called recapitalized banks after wasting GHc21 billions of tax payers money on collapsing banks. In 2018, GCB received in excess of GHc1 billion of liquidity support from BOG. In the last quarter of 2018, BOG lent over Ghc3.6 billion in liquidity support to CBG after spending over GHc8.05 billion on this same bank through paid up capital (GHc450 million) and corporate bonds of (Ghc7.6 billion) to be paid by the tax payer.

It is interesting that anyone with a passing knowledge of finance will contemplate that extending liquidity support to a bank can help hide or cover up loans on its books and yet in making the application for single obligor waiver you disclose the so-called loans to be covered up. For the sake of education, liquidity support does not contribute to the variables used in calculating single obligor limits. Single obligor limit is calculated on Tier one capital. Tier one capital is stated capital, income surpluses and reserves. So, how does granting liquidity support to a bank improve its single obligor obligations? While i can understand the lack of appreciation of the issues as exhibited in the article, I think it further exposes why Mr Otchere-Darko must stay away from technical issues on finance to avoid miseducating our young and student folks.

It is normal practice in credit management to evaluate a non-performing loan and to engage the borrower to find ways to assist the client repay the facility. This may lead to new proposals for repayment based on the realities and difficulties of the client backed by the client's business case. If the Bank is convinced by the proposals, business case and supported cash flows and value-driving strategies, the loan may be restructured. Part of the restructuring process may require efforts to bring all exposures to the client together (consolidation) to ensure improved risks management and monitoring of the various portfolio. This process may require regulatory approvals depending on the approval thresholds.

What I see in the memo is an approval of restructuring of a couple of facilities which individually may not require waiver of single obligor limit but cumulatively as related party facilities may require waiver of single obligor obligations. Any Governor who is desiring of helping a bank deal with an existing non-performing loan to make it perform would grant the approval based on a sound business, legal and financial case.

The memo basically identifies the loans that have been restructured and seeks approval for both the restructured facilities and the consequential waiver of single obligor obligations for the loan. How is this a cover up? If that is a crime, then the waivers listed below are scandalous;

In 2017, when BOG approved a corporate bond of GHc2.2 billion of Government issued to GCB for the resolution of UT and Capital Banks, the BOG technically waived GCB’s single obligor limit to one client, Government of Ghana. By that gesture GCB had lent Ghc2.2 billion to only one customer, the Government of Ghana. GCB Bank needed a Tier 1 capital of GHC22 billion to be able to meet its single obligor limit to undertake that transaction but waived it even though GCB Bank didn’t have a balance sheet of that magnitude.

In 2018, when BOG approved a corporate bond of Ghc7.6 billion of Government issued to CBG for the consolidation of the 5 banks and a further GHc1.5 billion for the consolidation of Premium and Heritage Banks in January 2019, BOG technically granted a waiver of single obligor limit to enable that to happen. How can a bank with stated capital of GHc450 million lend GHc9.1 billion to one single client?

While I am disappointed at the display of Mr Otchere-Darko on this matter, I am utterly surprised that he still has the impudence to speak on matters of this nature when;

1. His uncle, Present Akufo-Addo and his cousin, Mr Ken Ofori-Atta and some of his family members have, without shame, looked in the eyes of Ghanaians, and in the American philanthropic gesture downgraded the guarantee required for our national assets (ECG) and proceeded to procure a fake insurance guarantee to loot and share over Ghc2.2 billion national assets.

2. When it has become clear that the President is bent on stealing NIB and ADB through the back door by illegally doling out tax payers money to GAT to buy our own banks and place them privately with his cronies.

PDS and President Akufo-Addo's government's stealing syndicate built around the heart of the procurement watch dog PPA, the Ministry of Finance and the BOG makes Ghana a laughing stock in international diplomatic circles.

Mr Otchere-Darko needs to know that Ghanaians have become wiser and are more appreciative to the doer and pure-hearted John Dramani Mahama to save us from the cronyism that the NPP government is inflicting on them.

Sanitation Minister's 85% Cleanest City Claim Was A Propheti...
1 hour ago