An Open Letter To The Chancellor Of KNUST, His Highness Otumfuo Osei Tutu II 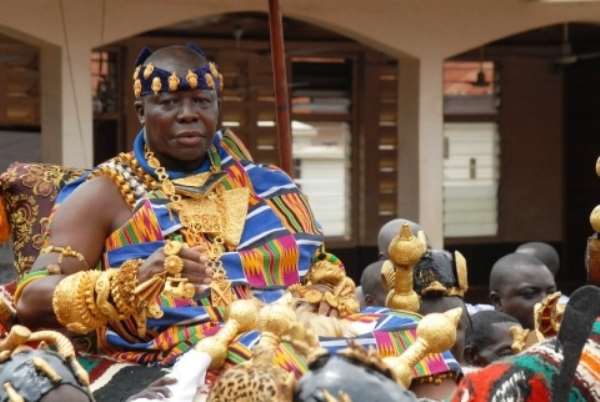 Your Majesty, as one of your humble servants in the Kwame Nkrumah University of Science and Technology, and in the Ashanti Kindom in particular, I publicly write to you with a deeper sense of genuine genuflection and obeisance to your Mighty Throne.

Growing up in the northern part of the country from the south, I was inundated with stories of the powerful Ashanti Kingdom characterized by the good, the bad, and even the ugly in its halcyon days as an empire.

While my mother always tried in vain to reconnect me to my Ashanti root and identity with pleasant tales of the Kingdom such as its rich culture, tradition, and warlords, my cousins on the other hand were always scaring me with how suspected enemies of the kingdom including strangers who attempted to mess with it, could readily and easily lose their heads.

Unfortunately, the latter stories sank with me growing up. So, at the mention of Asantehene as our King creates an awe and panic in some of us that makes us shiver vigorously and uncontrollably despite the fatherly relationship you relate with us as students. Again, the exalted nature of Your Throne has definitely placed you, majestically, above the reach of the ordinary even though You are the King for the ordinary and the weak who constitute the masses in Your kingdom.

I must also point out, that all this while, every Ghanaian knows, unless a fool, that it has been Your Majesty who have been holding and protecting the delicate threads that hold the Vice Chancellor, the University Council Chairman and the rest of the members of the University Council from snapping by the pressure of political interference.

However, the brutal weight of Your graceful Majesty and Grandeur has always discouraged and prevented some of us from publicly expressing Your influential and powerful role played after the impasse. And our fear has been obvious considering the magnitude of Your Throne. Nobody would wish to be summoned at Your Palace and flogged, at least, if they do not lose their heads for addressing a powerful and most revered King like You in Africa.

But we remain Your humble servants.

In this letter, Your Majesty, I run to You as our very powerful Chancellor and father as a student. Patience they say in our tradition is like a piece of elastic. It cuts when overstretched beyond a certain limit. I cannot hold it anymore but have to speak to Your Royal Highness publicly. And I plead for forgiveness in advance as Your very weak and docile servant.

The latest announcement about impending looming disturbances that seek to resurrect what You covered with Your majestic hand when you intervened in the university's impasse October last year, has the full potential of casting a darker shadow on the pristine image of our noble institution if the matter is not addressed once and for all.

Your Majesty, it is painful and shameful that majority of us at this level of our education in a prestigious university like KNUST together with some alumni, can prove to be a complete disgrace to academia and useless to the fundamental essence of education: being responsive to change and new ideas in the 21st century.

But Your Highness, a parent who deliberately enthroned his son as the Asantehene of his house must suffer the penalty of carrying the son in a palanquin alone. The kids gloves with which the impasse was treated did not help matters. How according to the understanding of many nobody was punished in spite of the havoc caused, has seemed to have given an automatic license and incentive to the perpetrators. As a result, they are salivated and being goaded on to again bamboozle authorities into submitting to what they want even if it involves destroying and vandalizing public properties.

If the international community that has been yearning for Africa's development are watching what's happening, they can easily spot and appreciate the source of Africa's old-age backwardness. Because, majority of its university students and graduates alike seem to be worse than unlettered rebels!

What students of our tertiary institutions protest against has clearly exposed the source of our Sixty Two years of underdevelopment as an independent country with numerous university graduates who cannot solve any of the country's problems. And rather continue to remain the country's most nauseating social liabilities and fifth columnists to our collective prosperity.

There's little or no impact of tertiary education, at all, on the majority of the nation's graduates who have been annually churned out. And whilst the source of this anomaly may yet to be ascertained, what's certain is that the "cram, pass, and graduate" format of tertiary education we have in this country, has made majority of graduates a mockery of university education. These are students who often abandon plenty of what they had studied over the years on campuses at the entrances of various tertiary institutions. Consequently, many students leave the precincts of universities and other tertiary institutions after many years of study as complete empty-headed nonentities to say the least.

Your Majesty, that maybe the reason why some university materials plus the proud alumni of these higher educational environments would ignore the numerous challenges of our country: bad governance with its pertinent plagues plaguing our nation, but rather find it convenient to mobilize one another to vandalize properties and threaten people's lives simply because the status quo has been challenged.

How can our status quo of backwardness ever become a thing of the past when majority of us cherish and glorify every status quo including a useless so-called "tradition" university students could protect at all cost? Shame.

Your Grace, it is particularly painful, tearfully, to note that some political leaders of our country condone this 21st century barbarism by students (the nation's future). But the reason may not be farfetched because whatever the snake hatches must be long. These students never fell from the sky. They were born and raised by many of our leaders.

I believe a thoroughly educated King as you are, who cherishes custom and also preserves culture, together with other traditional rulers in this country would not allow the country's future to get ruined while You are still in our midst.

It is with that reason I publicly write this letter to Your Majesty with enormous humility and respect by Your Grace, to as a matter of responsibility, goodwill, and for goodness sake, treat with the contempt and disdain it deserves, the foolish appeal by some misguided pretenders of the university who are masquerading as alumni and good ambassadors of KNUST in order to maintain a so-called tradition they never started.

This group of unprogressive students who choose to remain unreflective in order to maintain this unnecessary status quo are made up of some members of the two traditional Halls of the University (Katanga) and Unity (Continental) Halls of residence on campus. They have proven to be the university's most progressive flotsam and jetsam who hate new thinking. Every bit of it. And they must not be listened to.

As Your Grace is aware, since the inception of the university there had been four (4) males only Halls until 1991.

The Republic Hall, the Independence Hall plus the current two embattled Halls (Katanga and Unity Halls) were all segregated males only Halls.

But fast forward in 1991, the former two Halls were disaggregated and ladies were introduced into Independence and Republic Halls for the first time.

Your Majesty, what business do students have in the university management if twenty-eight years later the same policy that has nothing to do with their academics is to be implemented by the university again?

Did they come to the school to study or to assist in the administration of the university? In any case, why are these students hellbent on maintaining a tradition that perennially damages the university's hard earned reputation because of their frequent childish brawls over superiority, dominance, and influence in the university it generates?

It was Albert Einstein who said stupidity is repeating the same thing and expecting different results.

I suggest even if the sole reason of the university for mixing these troublesome Halls was only to increase female population on the campus, the above clashes alone must be enough a reason to mix the Halls, Your Majesty.

I was not born in 1991 let alone witnessing what transpired between Independence and Republic Halls when they were still segregated males only Halls. But what I can report with an air of supreme confidence is that there has never been any clash between these once segregated Halls on campus with any Hall. I have never heard or seen either Independence or Republic Hall fomenting trouble on campus or in any university within or outside Ghana.

In fact, Republic Hall has an enviable credentials of being the most admired Hall on campus in terms of organization of Halls Week Celebrations. But the same cannot be said with my own Hall Katanga nor our rivals in the unfortunate Twin Towers of the Unity Hall.

As a matter of fact, when Katanga or Conti. Hall is celebrating their Halls Week, you are likely to find participants on tenterhooks just in case of any eventuality they can flee. Because, Katanga Hall members would not allow any program of Unity Hall to be steered to a successful end lest they take advantage to dominate in KNUST. Likewise, members of Unity Hall would not sit aloof and watch Katanga Hall dominates with their well prosecuted programs.

This Washington-Moscow relationship between them has always left attendants of their programs afraid of being pelted or attacked at the climax of any of these Halls' programs.

I therefore appeal to Your Majesty to dismiss the flimsy excuses my colleague "Fellows" and their partners in clashes, are coming to make in order to have this wonderful decision of the university reversed. After all, they are not in the university to govern as students but to study.

Matters of university management must be left to university authorities especially, those matters that are outside the purview of academics and their general well-being.

I also hold the view that students who are not enthused with the decision could kindly cease to be students of the university. They should find themselves segregated universities to attend if only they could find some. Because it does not make sense refusing to share entrance with females yet they sit in classrooms with them.

As for the alumni, they have the liberty to return their certificates if they cannot cope with new ideas the university is bringing on board.

Your Majesty, the Kwame Nkrumah University of Science and Technology is not any student's father's property!

Long Live Your Throne and Kingdom.

The Writer, Iddrisu Abdul Hakeem, is a MasterCard Foundation Scholar (Alumnus) At KNUST.