Group Claims Their Leader Is The Holy Spirit In Person 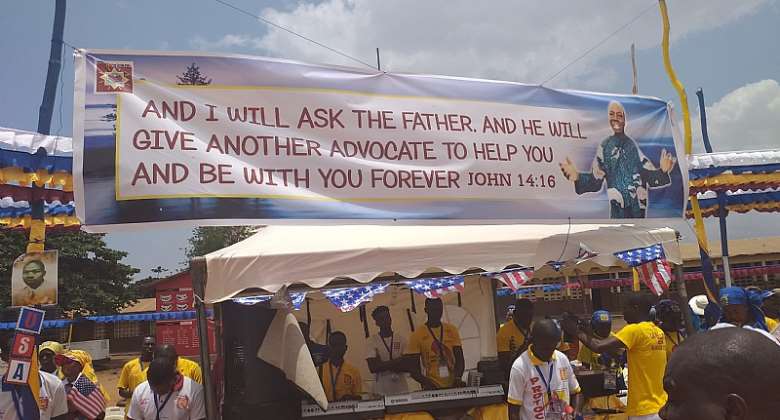 Since Jesus promised he will return to earth the second time, many have come and gone claiming they are him, but no one has claimed he is the Holy Spirit in person until now.

A religious group calling itself Association Louzolo Amour OPH (Love Association OPH) claims their founder and leader, Guy Emile Loufoua Cétikouabo is the Holy Spirit, who Jesus promised will come after him.

Beyond that, the group, which began in Congo claims to have about 40,000 in parts of the world, also believes the garden of Eden is in Africa, that God is black, Jesus is an Africa, and he has returned to earth on his second coming since 1942 in the person of their founder and leader, Guy Emile Loufoua Cétikuoabo.

Indeed, they insist their leader, who they affectionately call Papa Emile, is Jesus Christ and God himself, so those who are expecting Jesus' second coming should stop expecting because he is here in the person of Papa Emile.

All these emerged at the Association's maiden Annual Thanksgiving Convention in Ghana, which was attended by pilgrims from homeland Congo, Cote d'Ivoire, Togo, Gabon, Benin, USA, France and Ghana.

The convention was intended to introduce the Association and its beliefs and teaching to their Ghanaian public.

Member of the International Coordinating Council of the group, Brother Darius Aba Younga told journalists they have over 100 members in Ghana, mainly in the Greater-Accra, Eastern and Volta Regions.

According to him, they neither discriminate against nor condemn any religion, but they are only on a mission to bring the new biblical truth about the entire Holy Trinity - God the Father, Son, and Holy Spirit.

He explained that the association's belief in the new revelation about the Holy Trinity, the true origin of Jesus Christ and the personality of the Spirit of Truth promised by Jesus are all based on biblical verses and simple logic.

In fact they hold that since God manifested himself to man on a number of occasions in flesh and blood and Jesus also came to earth in flesh and blood, it goes without saying that the third person of the Holy Trinity, which is the Holy Spirit will also take human form, and that is Papa Emile.

"Jesus was born by a virgin and Papa Emile has no navel, which shows while he was in his mother's womb, there was no connection between him and his mum through any umbilical cord, and that is a clear sign his birth was as miraculous as that of Jesus," Darius Aba Younga opined.

One of the most controversial beliefs the association holds is that "the Bible is not complete without Papa Emile".

As to when that addition will be made, Darius Aba Younga did not say, but noted that "those of us who were with him in Congo in his human form and we ate and drunk with him till 2008 when he finally separately himself from human, have been filled with the grace to write everything down in waiting for the appointed time."

He said even though Papa Emile is known to hail from Congo, he has been seen in the various countries where the believers live, adding that some saw him in prayer, others saw his face in the skies and others experienced him in other ways.

"We believe it is time for Ghanaians to also embrace the truth and derive the full benefits of true godliness and experience with the Spirit of Truth that Jesus promised," he said.

According to him, the names of their founder and lrader and their means alone say it all.

"Emile is Emmanuel which means 'God among men' and Loufoua Cétikouabo mean 'death end there' - so Papa Emile is God and he will never die," Darius Aba Younga insisted.