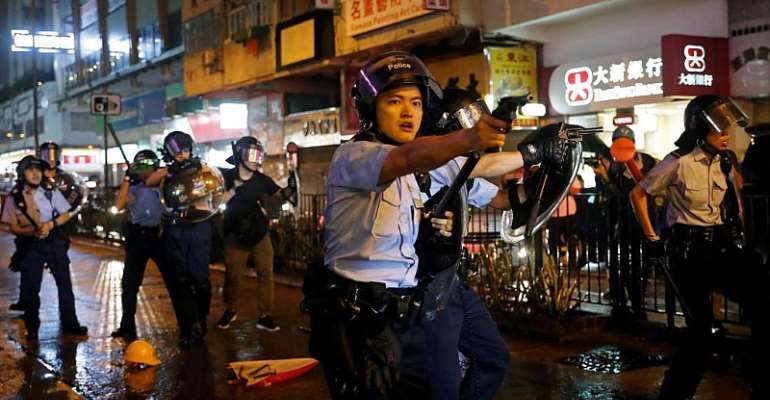 Hong Kong police used water cannon for the first time and at least one officer fired his sidearm during pitched battles with protesters Sunday, one of the most violent nights in three months of pro-democracy rallies that have rocked the city.

An afternoon rally in the district of Tsuen Wan spiralled into violent running confrontations between protesters and police, with officers several times caught outnumbered and isolated by masked youths wielding sticks and throwing rocks.

"My initial understanding was that it was a uniformed policeman who fired his gun," Superintendent Leung Kwok Win told the press

It was unclear where the shot was aimed, but it was the first live round fired since the protests started three months ago.

After firing tear gas in an attempt to disperse the crowds, police drove water cannon vehicles onto the streets for the first time during the protests, unfurling signs warning demonstrators they would deploy the jets if they did not leave.

The jets were later fired down from the moving trucks down a road towards a crowd of protesters who ran away.

No immediate reports of injuries
Police had previously said the vehicles, complete with surveillance cameras and multiple spray nozzles, would only be used in the event of a "large-scale public disturbance".

The financial hub has been gripped by mass rallies that were initially against a proposed extradition bill to China, but have spun into a wider pro-democracy movement targeting the pro-Beijing government.