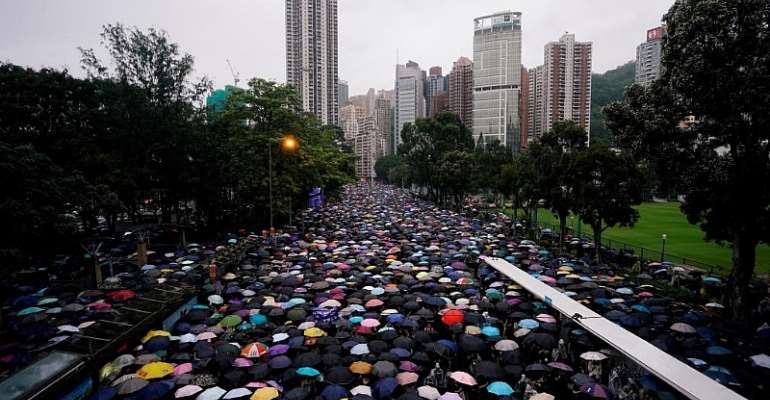 Hong Kong braces for anti-government demonstrations on Friday, including an anniversary homage to the 1989 human chain against Soviet rule of the Baltic states.

Accountants in Hong Kong joined the city's pro-democracy demonstrators on Friday, being the latest profession to back the movement in public.

A few thousand accountants marched to government headquarters brandishing signs with protesters' demands. These include the withdrawal of a bill that would have allowed extraditions to China. The bill has been suspended, but the protests against it have turned into wider calls for greater autonomy from China.

Protest leaders plan action over the weekend, including blocking the airport which was forced to close last week when protesters clashed with police.

Human chain
Protesters plan to create a 40-kilometre-long human chain on Friday evening, called Hong Kong Way, a nod to the 1989 Baltic Way, a chain of about a million people who linked arms for 600 kilometres linking the capitals of Estonia, Latvia and Lithuania to protest Soviet rule.

"The 'Baltic Way' brought the world's attention to their cause and inspired following generations," Hong Kong organisers said in a statement. "We plead that you will not look away at this crucial time. Stand with Hong Kong."

Baltic Chain commemorations
The Baltic Chain inspired similar moves in independence movements and protesters around the world, and the Hong Kong chain is not the first to target China. In February 2004, more than a million Taiwanese protesters formed a human chain to protest China's deployment of missiles.

Thousands are expected to take part in Friday's commemorations, which include concerts, exhibitions, runs and car rallies across the region. Most events include some form of symbolic chain.

Finance Minister Refused To Save 'Distressed' uniBank — Ex-D...
23 minutes ago