Banned timber at centre of Gabon graft scandal to be auctioned 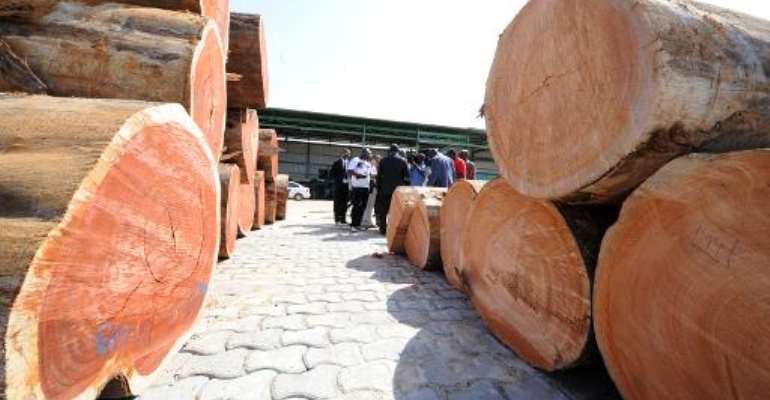 The hard wood of the Kevazingo tree, a famous species in Gabon, is in high demand especially in Asia. By Steve Jordan (AFP/File)

A haul of illegally-loggedtropical hardwood that triggered a major scandal in Gabon is to be auctioned, the environment ministry has said.

In February, the authorities seized 353 container-loads of kevazingo, a precious wood that is highly prized in Asia but which is protected under Gabonese law, at two Chinese-owned depots at the Owendo port in the capital Libreville.

Some of the containers bore the stamp of the forestry ministry to give authenticity to their export.

In a statement late Sunday, the environment ministry said that 125 of the 353 containers, amounting to 1,500 cubic metres (53,000 cubic feet) of kevazingo, had now been transferred out of the port.

The transfer to a designated timber store "aimed at converting this illegal timber into legal timber which is authorised for sale," it said.

This part of the haul will be "valuated and then sold (at auction) for state coffers," which could bring in 45 billion CFA francs ($76 million, 69 million euros), it said.

Logging is big money in the central African nation, which is almost 80 percent covered by forests. The timber industry accounts for 17,000 jobs and 60 percent of non-oil related GDP.

The new forestry minister appointed by President Ali Bongo is Lee White -- a British-born environmental campaigner who has lived for years in Gabon, battling to conserve its forests and wildlife.