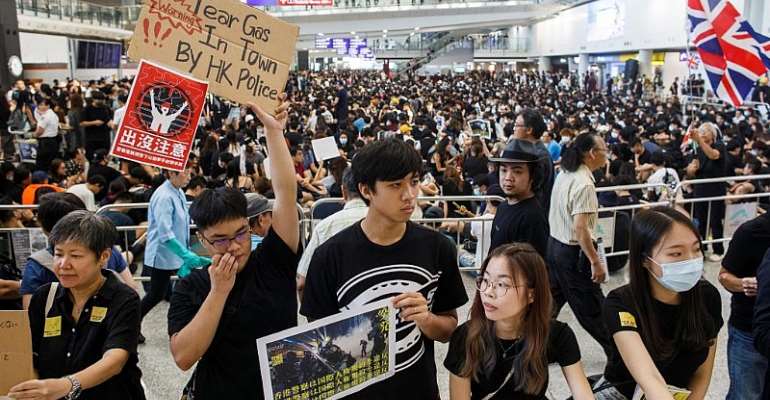 Hong Kong's leader Carrie Lam has ruled out any concessions to pro-democracy protestors who have been demonstrating the streets for two months.

Carrie Lam warned on Friday that she would stand fast in the face of economic chaos caused by the two months of pro-democracy demonstrations.

Negative effect on economy
In her second press conference on the protest movement, she said that the economic fallout from the unrest could be worse than the 2003 SARS outbreak in the Asian financial hub.

"The economic recovery will take a very long time," she said.

Travel agencies have reported drops of up to 50 percent in group tour bookings. Hong Kong airline Cathay Pacific has also warned that inbound bookings are lower for the season.

Business vs. rights
Activists staged a planned three-day sit-in at Hong Kong airport's arrivals hall and held up signs in Chinese and English against police violence.

Protests have continued since June on an almost daily basis. Confrontations with police have sometimes been violent. Hundreds of people have already been arrested in the unrest.

The demonstrations were sparked by Lam's support for a bill to allow extradition to mainland China.

The protestors are now calling for democratic reforms, the subject of the umbrella movement of 2014.

Their demands include a call for the direct election of the city's chief executive, currently chosen by Beijing.

On Friday Lam said, "At this moment what is right for Hong Kong... is to stop the violence, and to say no to the chaotic situation that Hong Kong has experienced in the last few weeks, so that we can move on."

Cathay Pacific airline caught up in the chaos

Adding to Lam's clout, social media campaigns against firms seen to be supporting the protest movement have been calling for Mainland China boycotts of those companies.

Among them is regional airline heavyweight Cathay Pacific.

Some of its air crew have joined protests and media reported one of its pilots had been charged with rioting.

Also the airline's flight attendants' union put its name to a joint statement with other aviation industry employees on Monday backing the protesters.

"We employ 27,000 staff in Hong Kong doing all sorts of different jobs," Slosar said, "You would easily imagine that within that 27,000 we have virtually every opinion on every issue... we certainly wouldn't dream of telling them what they have to think about."

Further protests are planned across Hong Kong over the weekend.