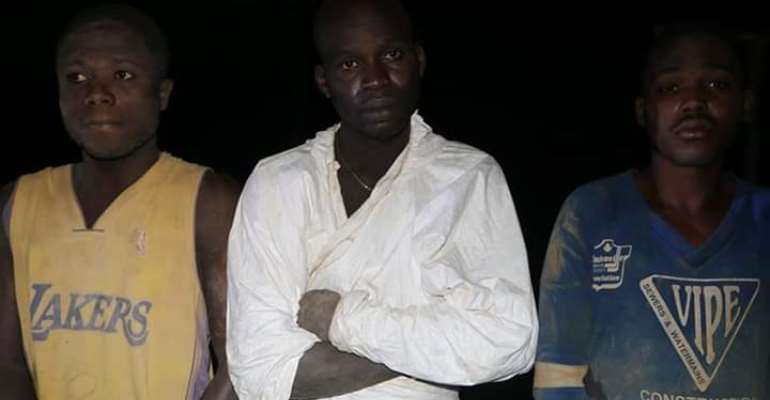 Operation Vanguard, the Joint Taskforce (JTF) of the Military and Police against illegal mining, has decided to be unpredictable with its time of operations in order to outwit galamseyers who have adopted nocturnal activities, to avoid the security patrols.

The illegal miners are not only degrading the environment by their activities, but they are also resorting to the use of dynamite, posing a safety hazard not only to themselves but also to the Vanguard personnel tasked to halt their activities.

At about 3:30AM on Monday morning, Vanguard personnel from its base in the Ashanti Region arrested seven (7) suspected illegal miners in the Amansie Central District.

The suspects, who were between the ages of 17 and 36 years, were apprehended in an early dawn operation at Akatakyieso, a suburb which has gained notoriety for illegal mining in recent times and the culprits have since been handed over to the Obuasi Central Police Station for further investigations.

Illegal mining sites are close to towns and villages which support their criminal activities, thus Operation Vanguard makes a call to traditional, religious and opinion leaders, together with other key stakeholders, to lead in the fight against illegal mining which is seriously destroying the environment.

Just as the citizenry is becoming alert in the fight against recent spates of abductions in the country, Operation Vanguard also calls on every citizen who knows where illegal miners operate, to make an effort to alert the Vanguard team who remain resolute in the realization of its mandate and will continue to conduct its operations as such.

W/R: Five wounded after residents of Ampatano and Kamfakrom ...
58 minutes ago