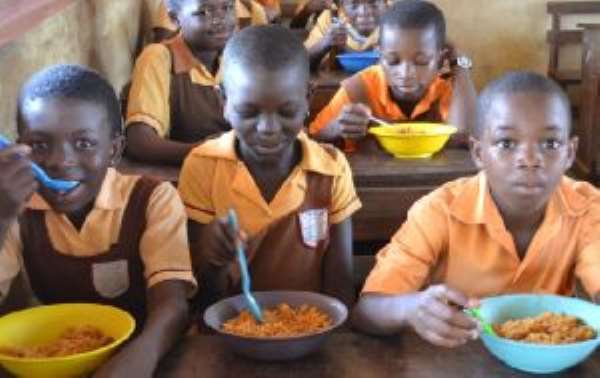 The Ghana School Feeding Program started in 2005 to among other things provide children in selected public primary schools and kindergartens in the poorest areas of the country with one hot, nutritious meal a day.

The concept was meant to increase primary school enrollment as it was thought that many children of school-going age were home because of the inability of their parents to provide them food and would rather send them to work on farms or engage them in some economic activity to make some money for the household.

Over the years, the program has evolved through the stages, experiencing its fair share of challenges. But the number of pupils on the program kept growing steadily as more schools were added. From an initial 64,000 beneficiary pupils in 2006, the program now feeds about 1.7 million school children.

Just like many things run by government, supervision is every now and then lax. So there are instances where the food cooked is of poor quality, the caterers do not show up sometimes but still get paid for those days, and issues of unwholesome food served the children on a few occasions.

Government has also not always kept its side of the bargain by paying the caterers on time for them to be able to settle their suppliers and this surely affects many things.

In February this year, I visited the Gbayamli Methodist Nursery and Primary School in the Sagnerigu Municipality of the Northern region, a beneficiary of the Ghana School Feeding Program.

It was a few minutes past 10 in the morning and pupils were on break preparing to have their meals, so I moved closer to the kitchen. Some pupils who had already queued for the rice and beans meal, popularly called waakye, were gradually walking away. My curiosity was triggered and so I found out why.

Some of the pupils told me, 'each time we eat the food and go back to class, our stomach is always paining us. We are not able to concentrate. The food is not nice; they prepare it anyhow for us because we are students.'

At this school, cooks prepare the meals under unhygienic conditions, often competing for space with animals. I learnt a kitchen was provided by the community but has since collapsed. This has had many of the pupils worried.

'The place they cook the food is not neat, people urinate and defecate there' they said.

Teachers in this school also share similar concerns over the poor quality of food served the pupils.

The cooks are equally not impressed with the conditions under which they cook meals and have complained to caterer about the situation.

'Our challenge is the kitchen and water. The kitchen has collapsed. The situation is worrying, we and our children can even fall sick due to the scorching sun. We also compete with animals for space. We told the matron about the challenges we face here, she has also seen it and has ketp assuring that she will fix it.'

Razak Mahama is the chairman for the Parent Teachers Association and says they are not happy about the conduct of the caterer.

'I have never met the caterer, I last called the assembly man to come and see how the food is being prepared but he never turned up. I think I might offend someone if I mean to talk about it. I have taken a decision not to speak about the food. The children have also complained and personally, I went to see how the food is prepared, it's not the same as the previous cooks.'

Abukari Ayuba is the head of Programs and research at Northern Network for Education Development (NNED), his organization has been monitoring the program and shares with me some of the findings.

He continued, 'Some caterers will take the contract and get two or three cooks in the community to be cooking and they will only bring the food for them to cook. When they don't bring food, the cooks don't also cook. So there are so many challenges. And when they are submitting their returns, they count the number of school days not according to the number of days they have cooked. Even when the cook has cooked for three days, they are paid for the entire period'.

After more than three months, I revisited the school and the situation remained the same. This time round the cooks were not at post and school authorities could not explain why.

The school feeding program is a laudable initiative the implementation is fraught with challenges which if not addressed, will derail the objectives of the policy.