The June Market: A Call To Marry Young 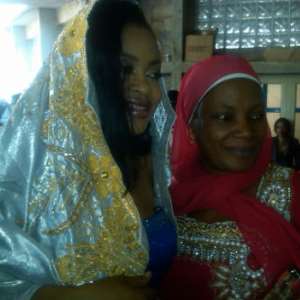 These girls have done well; they have finished 'college'. They have kept themselves well to finish school .They didn't get pregnant.

In the good old days, there would be job opportunities ready for them; they wouldn't need to be thinking about texiary education, and the continuous burden for poor parents would cease.

They are unlucky to be born in an era of useless governments that are incapable of making good use of everything here to provide comfortable lives for our girls who are about to finish ' college'.

To think even nurses can't find jobs today; what is wrong with our leaders?

In the good old days, these girls in their youthfully beautiful essence would attract all manner of suitors; only worthy men would finally get the chance to do the respectful to even invite these girls to their homes.

But a perverse society as we have today has no plans of protecting and maintaining the purity of these girls.

We would leave them to the hash societal conditions; soon they would lose everything that a girl would bask in as priceless jewels of society.

We would turn around soon to mourn how our future mothers have lost themselves to the world's decadence.

A young man in his twenties just got married to his growing up sweetheart in my area. She is also very young. They had a wedding only told in a fairy tale.

The young man has something to do just after University; and his first thought was to marry his unemployed sweetheart.

It is a great sight to behold watching this young couple moving from their house to church.

The young boy loves the young lady, and he has shown it. He is ready to work to feed his young wife ; hoping one day she would also get something to do to support him.

The couple has begun life on hope, and it is beautiful.

The guy hasn't gone the usual custom of insisting the young lady gets a job before he marries her.

As odd men do today. They insist their girlfriends get jobs before they take their hands in marriage; they turn round to demand of people's innocent daughters all a man expects of a wife.

The bible says there isn't any love greater than the one who lay down his life for the other.

And this is how it should be for every young lady; like it is told in a fairy tale. A young girl's knight in shining armor would arrive in gallantry to save her from the many male cheats who are 'chopping' people's daughters left and right for free not knowing when they would marry these girls.

All that it takes is having young men in society making that decision to flee sexual permissiveness outside marriage and to take young wives and to be ready to work to support their young wives.

Soon, their young wives would acquire more education or skills in trade that would help them to work to support the man.

Marriage can no more be a termination point for any woman's desire to achieve any dream.

Now we have daycare centers everywhere, and we have tertiary institutions offering distant education for all.

This singular call if heeded to would prevent young men having the liberty to dishonor people's daughters at pleasure.

Young men would have the delight of having all the sensuous pleasures only a youthful wife could grant a man.

They would escape the disgraceful and laughable situation as we have today where a man spends half of his existence here working to have the wealth to marry a one single " old experienced woman' who would struggle to give him even two kids.

Young men would have the singular honour of growing with their wives; grooming them along to suit them.

Small girls would be protected from giving ' blow jobs' to strange men in the name of love.

Ancient magicians turn prophets today can spare us their wild prophecies on our personal lives because our girls won't be spending all night all day with them for anything.

And the father; the son; and the holy spirit could have their long needed vacation.