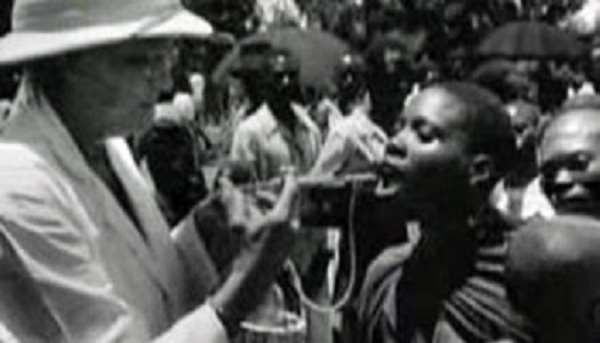 "Whatever goes around comes around," they say, above all, there is time for everything. The World Health Organization has collaborated with the US government, and millionaires, such as Bill Gates, to decimate Africa with contaminated vaccines to reduce the population, yet they claim to eradicate the threat of diseases in Africa.

African leaders have remained quiet over every medical crime organized by the World Health Organization in Africa and selfishly, they enjoy aids projects financed by foreign countries at the expense of victims of Aids and Ebola.

And now the Ghanaian government wants Ghanaians to accept the new malaria vaccines being implemented by the Ministry of Health to prevent malaria in Children in Ghana? At times, I wonder why Ghanaian leaders behave in that way. Do they read at all?

The World Health Organization and the Centers for Diseases Control have provided false information about the two-linked diseases, Aids and Ebola, on their websites which have become their nightmares to remove them. Instead, they have left them. What a shame?

Belgium colonized Congo, do the Ghanaian government encouraging Ghanaians to vaccinate their children against probably polluted malaria vaccine, aware that the vaccine which was used in the population of the Congolese by the Belgian government against malaria was never used by Belgians in Congo that time?

The Belgian government sprayed the contaminated vaccine directly into the mouth of the Congolese children but the Belgians in Congo were given special capsules to protect them. Why?

Ghanaian leaders are greedily selfish to the extent that they can sell the entire Ghanaian population for the dollars. Nobody is saying here that vaccination is bad but due to deliberate crimes committed by the World Health Organization, how can Ghanaians guarantee the safety of the malaria vaccines?

Before they will convince Ghanaians of the safety of the malaria vaccine, they should first impress Ghana by speaking against the medical crimes by the US government in collaboration with the World Health Organization to decimate Africa with man-made diseases.

That will give enough assurance or encourage scared mothers to vaccinate their children against malaria in Ghana.

If the Ghanaian government is interested in obtaining the documents pertaining to medical crimes in Africa by the World Health Organization and the US government, I will send them copies.

I don't know the Dutch scientist, Johan Van Dongen, and the German doctor, Wolff Geisler, but because I want to know the truth if Aids and Ebola were biological weapons against Africa, I made appointments with them and travelled to Holland and Germany to see them.

If you really care about the health of Ghanaians, the health minister Kweku Agyemang Manu should have taken that responsibility to find out the truth. No Ghanaian health official did that. Selfish, lazy people.