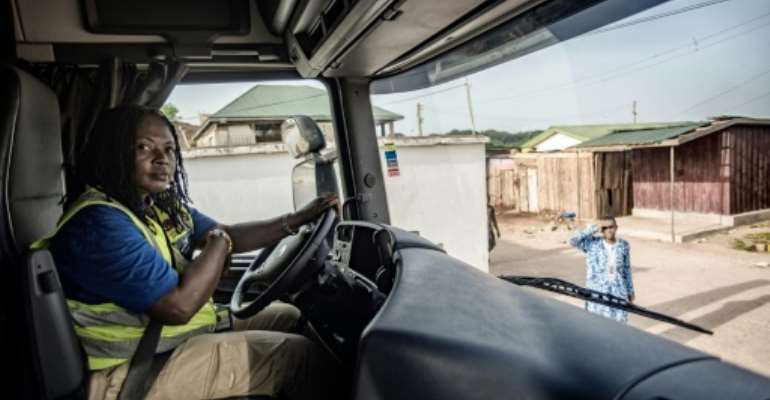 Abigail Asumadu-Amoah (pictured) is one of the 21 lorry drivers on the all-women team at Ghana's Ladybird Logistics. By CRISTINA ALDEHUELA (AFP)

Rumbling along the rutted roads of Ghana at the wheel of her giant truck, Abigail Asumadu-Amoah turns heads but keeps her focus.

She is one of 21 drivers working for Ladybird Logistics, a company that claims to be "the first company globally to employ only female drivers."

In a tough industry dominated by men, the women are changing attitudes.

"What men can do, women can also do," said Asumadu-Amoah, who hopes other women will be inspired by their achievement. "It's (a question of) determination."

But for Asumadu-Amoah, 44, the biggest challenges she faces are the state of the pot-holed roads in the West African country.

"Drive defensively and carefully," Asumadu-Amoah said, of her approach to her work, as she waited for her tanker to fill with fuel from a depot in the coastal port of Takoradi, some 225 kilometres (140 miles) west of Ghana's capital, Accra.

The transport sector is a big employer in Ghana but is dominated by men.

Nearly eight percent of men in Ghana work in the transport and storage sector, according to government figures, compared to only 0.3 percent of women.

But there was a problem, said William Tewiah, managing director of Ghana's Zen Petroleum, a major fuel transport company delivering supplies to industry across the region. 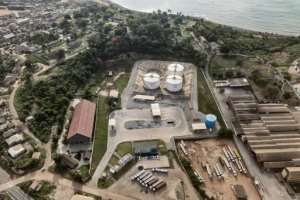 Drivers would fill up their tankers with fuel in Takoradi before driving to mining sites across Ghana.

On the way however, they would syphon off supplies for themselves on a grand scale.

Looking for a solution, he said he realised that something new was needed and that hiring women could be the answer.

Since women would be coming in fresh to the industry, they would have a "completely different mind-set", he added.

In late 2017, Tewiah approached independent management consultant Payin Marfo to turn his dream of having an all-female truck driving company into a reality, making her Ladybird's managing director.

In October the following year, Ladybird began delivering fuel on behalf of Zen Petroleum to supply one of the gold mines.

Based in Takoradi, Ladybird, which is owned by a group of shareholders, covers three routes currently, the longest of which takes about seven hours. 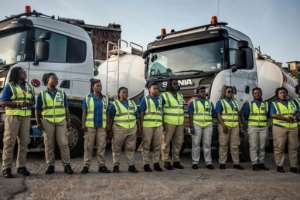 Behind the setting up of the all-female truck driving company was a need to try to stop the theft of fuel out of the tankers while en route. By CRISTINA ALDEHUELA (AFP)

"I sleep a lot better at night not having nightmares about fuel disappearing," Tewiah said.

The drivers, aged between 28 and 45, were all experienced and licensed to drive heavy goods vehicles, many as bus drivers.

Ladybird gave them extra training, including with support from the Swedish truck manufacturers Scania, and Ghana's army transport corps.

The military trucker training included physical drills with the army instructors, defensive driving lessons, as well as tips on handling the fuel trucks.

So far, Ladybird Logistics' only customer is Zen but in time it hopes to expand.

Marfo said that the company planned to more than double the number of drivers by hiring 24 more and increase the size of the fleet.

"A lot more ladies are showing interest," she said, adding that every week a woman contacted her asking for a job.

"For me, that is the first goal already achieved," she added. 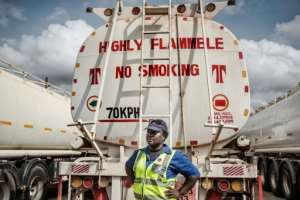 In an industry dominated by men, the all-female staff of Ladybird Logistics are changing attitudes. By CRISTINA ALDEHUELA (AFP)

The company also has a female mechanic on hand, 28-year-old Beatrice Frimpong.

As well as providing her with a job, Frimpong hopes it can encourage other women.

"It will empower someone to do something extraordinary," Frimpong said.

Men have sometimes told her that she was too small or weak for the work and that she should stick to smaller vehicles, she said.

So moving to repair lorries -- like the tanker trucks she works with today -- was an act of defiance.

"I wanted to prove to them I can do it," Frimpong said. "It doesn't matter whether I am big or small, I can do it."

The team has won supporters among male colleagues.

Justice Zoiku, a truck driver filling his tanker in the same fuel depot, said that he was always happy to see the Ladybird drivers on the roads.

"They have patience and take their time to do everything," Zoiku said. "They are doing well."

Zoiku, a proud father, also said that he would be happy if his daughter decided to follow in his footsteps and drive a tanker.

"If she wants to drive I will support her," Zoiku said. "What men can do, women can do it better."