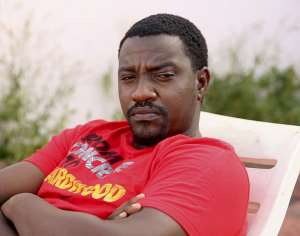 It was said that the lady's only request of Dumelo was he to father a child of her. This was in response to Dumelo's own public request of ladies on what he could do for any of them.

For me, this lady's request of Dumelo is akin to Solomon asking of God wisdom to rule his people.

And so this young lady's unusual request of Dumelo was a departure from the norm.

I guess she was looking at the bigger picture of her life.

A child of Dumelo might grow to take up his father; he would be a successful entertainer and an entrepreneur.

Great men most often give birth to great children.
And her old age would surely be comfortable having a child who would be successful like his father.

This is a request borne out of wisdom that is uncommon in our world today.

And so it was in the past; women of old only secured their future in the choice of a male partner.

Women of old were not interested in fine daddies who would spend their little resources trying to afford them foreign delicacies only for a day.

Women of old moved in with men who had their future certain; they looked at their farm size; their harvest barn; and the name the men bore in society.

They didn't desire their own lousy men; they desired men with a track record even if they were already married; and even if the man was suggested to them by their parents.

And this is what the 16 years young beautiful Sidi, a character in Wole Soyinka's 'The Lion And The Jewel' did. She finally decided to move in with the old wise Baroka who is with a track record tied to his loin rejecting in the process the fanciful promises of the young teacher of a blissful marriage built on straw.

Women of old were rather strategic in dating; even the villainous Bethsheba ( in the bible) who cheated on his husband and got married to David later got her own son Solomon to rule over Israel.

Today, modern women cheat for orgasms.
Today, the standards modern women have for the male is almost fanciful. Modern men are not expected to achieve substance to earn the praises of the female.

The modern single woman is doing everything to hold on to the laziest of men.

And the modern young man loves his idleness.
But a few men have resisted the trap of falling into the low standards set for modern men by modern ladies.

I have a young welder friend. He is in his early thirties. He works morning to evening; Monday to Saturday and sometimes Sundays.

Most often I spend some free time hanging around with him at work.

Just in a few hours, he would fix something on a few cars and would make about GHC150 from his customers.

He is married with kids, and he is building his own house.

The other day he was asking my view on fixing an air-condition in his rented chamber and hall to help him through the high temperature we are experiencing these days..

He has clad in his black oil dirtied working gear all day; he would invite me for a drink and some kebab in the weekend.

He had told me before how fine ladies half-dressed like orphans looked down on him.

This is a man who could make about GHC200 a day at his shop; city girls would say they are not his standard because of his usual dirtied apparel.

They would by-pass him to clutch on idle men in 'otophista ' jean wear who haven't earn a monthly pay cheque before.

And these city girls look down on women before them for surrendering themselves to men chosen for them.

They would boast about how they would choose their own husbands.

Unfortunately, my grandmother would say ' we don't know what is good'.

These ladies don't know what is good in a husband; they would give all the wild sex to idle lazy men; they would even give "BJ' to them to drive them into ecstasy just to keep holding on to idle men.

Meanwhile, women of primitive Isreal only danced to David when he had killed ten thousand.

And yet modern men don't need to do anything to be treated well in bed by modern women.

And modern women are enlightened.
And so the modern man has no pressing reason to succeed; at least the modern woman is not pushing him to do that.

The modern man is not thinking of starting that great empire that would bear his name into the future.

Most of these young men idling about could take up learning a skill. My friend welder would be glad to teach them a job that could guarantee them wages better than what many receive in public institutions, but these boys are feeling too big; in their poverty.

They hold on to their certificates whilst staying at home; later in the day, they would put on their only one best to meet their equally wayward girlfriends.

These are the young men and women who would troupe in in numbers to partake in orgasm conference organized by so-called motivational speakers.

These young ones: male and female, who would walk aimlessly about smelling of hunger actually believe orgasm would do the trick for them.

Orgasm is the modern cure for the severe hunger the modern young man and woman suffer. They drink 'Adonko Bitters ' on an empty stomach to treat their wayward girlfriends well in borrowed beds.

And this is all that the young man thinks about. He has no big plans. He would die as an average man. He would die with nothing in his name. His family might have to buy in credit his coffin to bury him hoping to get some huge donations to pay for it

A man is born to higher standards than this.

Let's go on our knees and pray for Akufo-Addo for God's inte...
24 minutes ago

NDC race: I will retain my seat and help bring Mahama back t...
34 minutes ago