Wet beds stand empty in water-logged wards, workers slosh through the corridors in rubber boots and a nauseating smell permeates the air: Beira's main hospital is stricken, just when it is needed most.

The once-majestic main building of Mozambique's second largest hospital now lies shattered. Part of its roof is torn, rooms are flooded and the walls are cracked -- the terrible work of Tropical Cyclone Idai.

The storm smashed into central Mozambique last Friday, packing winds of up to 194 kilometers (120-mile) per hour.

Beira, a port city of half a million, lay in its path. And the vast hospital that is its pride lay less than 100 metres (yards) from the sapphire waters of the Indian Ocean. 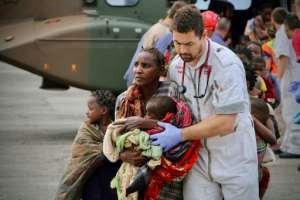 Roofs were ripped off many of the hospital's buildings and rooms on the ground floor were flooded to a depth of 30 centimetres (12 inches), forcing the evacuation of some wards.

Communications and electricity were cut off, and roads linking Beira to the outside world were washed away or flooded.

The hospital -- which services 2.2 million people in Sofala province -- is now operating at little more than a third of its capacity.

"We have no choice. Either we send the sick people home or admit them under these conditions," hospital administrator Abu Julio told AFP walking down the corridor of the flooded hospital in gumboots.

Clinical director Ana Tambo said that the hospital was still admitting new patients despite the wreckage. 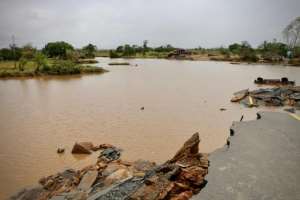 One of the biggest headaches is surgery -- the block housing the operating theatres has been extensively damaged.

"We are carrying out surgery only in very dangerous situations, only for pregnant women, Caesareans," said Marcos Quittino, one of the surgeons.

"The risks of infection are high," he said.

The nursery was evacuated before the cyclone struck.

With all power pylons knocked down, the hospital is running on a generator -- and diesel supplies are dwindling.

"Itâ€™s very difficult dealing with it. Weâ€™ve no electricity since the cyclone. Our diesel reserves are in the red. We need more to save lives," said Tambo.

More than 60 percent of the hospital's buildings were totally or partially destroyed, according Julio.

The hospital's blood bank was destroyed and there are very few units that are still fit for transfusion.

The shortage poses a domino threat across the province, because smaller hospitals in the region normally draw their supplies from the central hospital.

As a teaching hospital, it had more than 800 students undergoing training in nursing and other healthcare disciplines, but classes have been suspended. This, too, will have a ricochet effect.

"Weâ€™ve around 100 final year students due to graduate this July," Kizito Comissario, director of the training institute, said.

"This is going to cause serious problems not only in Beira but in all the province as local hospitals are waiting for the health technicians weâ€™re training here."