Ghana, Togo And Benin On Alert Against Jihadist Threat

By Celia LEBUR, with Kent MENSAH in Accra, Emile KOUTON in Lome and Josue MEHOUENOU in Cotonou 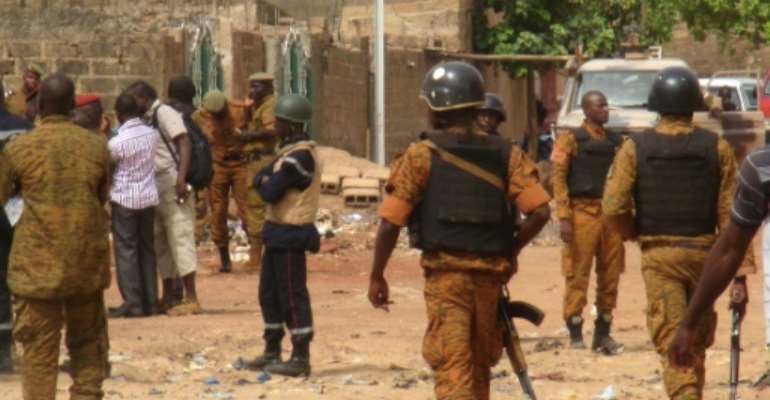 The speed at which jihadist violence has spread in Burkina Faso has taken many by surprise. By STR (AFP/File)

An alarming rise in jihadist attacks in Burkina Faso is posing a mounting threat to security in three of its coastal neighbours, according to security sources and analysts.

Benin, Ghana and Togo have so far been spared the Islamist violence that has hit their landlocked neighbour since 2015 -- a fallout from instability in Mali, a haven for groups linked to Al-Qaeda and the so-called Islamic State group.

Yet the speed at which violence has spread in Burkina Faso has taken many by surprise.

In recent months, attacks have occurred in the eastern region, which borders Benin and Togo, sparking fears that the jihadist bushfire in the Sahel is heading towards the coast.

Security fears have increased since the killing of four Burkinabe customs officials and a Spanish priest who was returning from a meeting in Togo's capital, Lome.

They were killed just after crossing the border.

Bakary Sambe, the head of the Timbuktu Institute in Senegal's capital, Dakar, said the upsurge in violence "seems to indicate that Burkina Faso is the last obstacle that these groups want to get over to reach the coast".

Northern Ghana, Togo and Benin could become "ideal staging points" for jihadists hiding in forested areas or isolated rural locations along the porous border, he added.

"What's more, stretching their area of operations far from the current epicentre of jihadism could allow them access to the sea via west African ports" and possibly new networks for acquiring weapons, he told AFP.

Ghana and Togo went on high alert against attacks after gunmen from Al-Qaeda in the Islamic Maghreb (AQIM) killed 19 people in the Ivorian resort of Grand-Bassam in March 2016.

In the W Regional Park, which straddles Benin, Niger and Burkina Faso, rising militant activity has been detected in recent years.

Police have been the victim of attacks in Burkina Faso. By AHMED OUOBA (AFP/File)

The Thomas More Institute, a European think-tank, said this month that "fighters from Mali reportedly conducted a reconnaissance operation in 2014-2015 reaching as far as Benin".

Other sources point to "recent incursions of small groups" from Burkina Faso to villages in northern Togo and Benin, where locals have been asked to stop selling alcohol.

Radical messages have also been preached in mosques, they added.

Several were suspected of jihadist activities.

One senior Togolese security official, speaking on condition of anonymity, said military reinforcements had been sent to the north since the Spanish priest was killed.

He gave no further details but said of the security situation in Burkina Faso: "The threat is real. Everyone is on the alert.

"The Togolese and Beninese security forces are working in close collaboration with the Burkinabe.

A jihadist attack on a hotel in Ouagadougou in January 2016 killed 29 people including foreigners. By ISSOUF SANOGO (AFP/File)

"Patrols have been organised regularly in recent times in border villages, especially at night-time."

Ghana Army spokesman Colonel Eric Aggrey Quarshie said the military was "on top of" protecting the northern border. "Everything is under control," he added, without elaborating.

But Ghana's National Disaster Management Organisation said it was beginning to see the effects of violence in Burkina Faso.

In recent weeks, more than 300 people, including 176 children, have sought refuge in the Bawku area of northeast Ghana.

Most attacks in Burkina Faso go unclaimed but are blamed on Ansarul Islam, the Group to Support Islam and Muslims (JNIM) or the Islamic State in the Greater Sahel (ISGS).

Ansarul Islam emerged near the Mali border in December 2016. The JNIM has sworn allegiance to AQIM, while ISGS was behind the deadly ambush of US troops in western Niger in 2017.

Rinaldo Depagne, West Africa project director at the International Crisis Group, said the exact nature of the relationship between these groups and others was unclear.

But he said the militants were exploiting the "weak link" -- the government in Ouagadougou, which does not have the means to confront the problem on its own.

"The increase in fronts allows them to avoid the military response from Western armies and forces of the G5 Sahel group (Mauritania, Mali, Burkina Faso, Niger, Chad)," he added.

A wider geographical spread of militants is complicated further by the involvement of criminal groups which have long operated in border areas.

They have joined the jihadists as cover for their activities such as weapons and drug smuggling or illegal gold mining.

Several analysts said poverty, illiteracy and the geographical remoteness of the border areas could make them fertile breeding grounds for radical ideologies.

The same factors helped the development of Boko Haram in northeast Nigeria.