His Imperial Majesty Haile Selassie: When We Were Kings 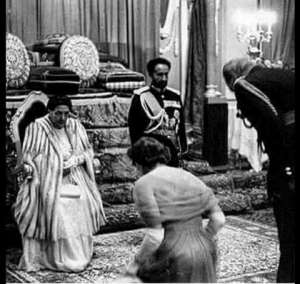 Rare photo of Queen Elizabeth and Prince Phillip bowing before the real original African Royalty...Empress Menen Asfew and her husband His Imperial Majesty the King of Kings of Ethiopia, Conquering Lion of the Tribe of Judah, Elect of God, Emperor Ras Tafari Makonnen Woldemikael Haile Selassie I of Ethiopia..

Today, Haile Selassie is worshipped as God incarnate among followers of the Rastafari movement (taken from Haile Selassie's pre-imperial name Ras—meaning Head, a title equivalent to Duke—Tafari Makonnen), which emerged in Jamaica during the 1930s under the influence of Marcus Garvey's "Pan Africanism" movement. He is viewed as the messiah who will lead the peoples of Africa and the African diaspora to freedom. His official titles are Conquering Lion of the Tribe of Judah and King of Kings of Ethiopia and Elect of God, and his traditional lineage is thought to be from Solomon and Sheba. These notions are perceived by Rastafari as confirmation of the return of the messiah in the prophetic Book of Revelation in the New Testament: King of Kings, Lord of Lords, Conquering Lion of the Tribe of Judah, and Root of David. Rastafari faith in the incarnate divinity of Haile Selassie began after news reports of his coronation reached Jamaica, particularly via the two Time magazine articles on the coronation the week before and the week after the event. Haile Selassie's own perspectives permeate the philosophy of the movement.

Haile Selassie visited Jamaica on 21 April 1966, and approximately one hundred thousand Rastafari from all over Jamaica descended on Palisadoes Airport in Kingston, having heard that the man whom they considered to be their messiah was coming to visit them. Spliffs and chalices were openly smoked, causing "a haze of ganja smoke" to drift through the air. Haile Selassie arrived at the airport but was unable to come down the mobile steps of the airplane, as the crowd rushed the tarmac. He then returned into the plane, disappearing for several more minutes. Finally, Jamaican authorities were obliged to request Ras Mortimer Planno, a well-known Rasta leader, to climb the steps, enter the plane, and negotiate the emperor's descent. Planno re-emerged and announced to the crowd: "The Emperor has instructed me to tell you to be calm. Step back and let the Emperor land". This day is widely held by scholars to be a major turning point for the movement, and it is still commemorated by Rastafari as Grounation Day, the anniversary of which is celebrated as the second holiest holiday after 2 November, the emperor's Coronation Day.

From then on, as a result of Planno's actions, the Jamaican authorities were asked to ensure that Rastafari representatives were present at all state functions attended by the emperor, and Rastafari elders also ensured that they obtained a private audience with the emperor, where he reportedly told them that they should not emigrate to Ethiopia until they had first liberated the people of Jamaica. This dictum came to be known as "liberation before repatriation".

Haile Selassie defied expectations of the Jamaican authorities and never rebuked the Rastafari for their belief in him as the returned Jesus. Instead, he presented the movement's faithful elders with gold medallions – the only recipients of such an honor on this visit. During PNP leader (later Jamaican Prime Minister) Michael Manley's visit to Ethiopia in October 1969, the emperor allegedly still recalled his 1966 reception with amazement, and stated that he felt that he had to be respectful of their beliefs. This was the visit when Manley received the Rod of Correction or Rod of Joshua as a present from the emperor, which is thought to have helped him to win the 1972 election in Jamaica.

Rita Marley, Bob Marley's wife, converted to the Rastafari faith after seeing Haile Selassie on his Jamaican trip. She claimed in interviews (and in her book No Woman, No Cry) that she saw a stigmata print on the palm of Haile Selassie's hand as he waved to the crowd which resembled the markings on Christ's hands from being nailed to the cross—a claim that was not supported by other sources, but was used as evidence for her and other Rastafari to suggest that Haile Selassie I was indeed their messiah. She was also influential in the conversion of Bob Marley, who then became internationally recognized. As a result, Rastafari became much better known throughout much of the world. Bob Marley's posthumously released song "Iron Lion Zion" refers to Haile Selassie.

As far as it is known, Queen Elizabeth and Prince Phillip have never bowed before anybody else...