Ghana's Parliament Has Been Comatose On Arrival 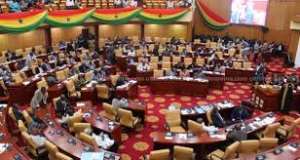 Before my head is being sought after by these "political celebrities" in our Honourable House, let me emphatically state that I'm aware of Article 41(a) of the 1992 constitution that enjoins on citizens "to promote the prestige and good name of Ghana and respect the symbols of the nation"!

However, I believe it's about time frank exchanges of home truths take place without fear or favor.

My aim though is not to denigrate the supreme laws of our land and make simpleton of our State institutions.

I was very furious that the august House of Parliament took offense when the Honourable Kennedy Agympong was reported to have purportedly referred to Parliament as a "useless House".

Folks, let us not engage in an animal farm attitude of one Nation two moralities here: If our Parliament is not "useless", what is it?

A House whose sole job it is to police the Executive, has the leader of the Majority side of the House including his deputy, and almost all parliamentarians belonging to the majority who all laboured to bring the same political party to power, with the president as the leader of the political party, being silenced with gift of ministerial positions by the president, and unsuspecting Ghanaians expect diligent job done from these "watchdogs"?

Since the commencement of the 4th republic, there has been shameful genuflecting of the Legislature to the Executive that has orchestrated fraudulent adulation and false adoration between them, but with a spurious handshake between Minority and Majority members in the House.

The reduction of the House's activities to a mere incessant verbal cyclone and incendiary hate-spewing is the most nauseating embarrassment we can continue to do as a civilized democracy.

I didn't witness how our Parliaments, during the 1st, 2nd, and 3rd Republics carried out legislative processes in 1960, 1969 and 1979 respectively, but the power of the current Legislature in this 4th republic as a lawmaking body and a watchdog over the Executive has dwindled away.

It is a shame that what is known as Separation of Powers and Checks and Balances, have been sacrificed on the altar of voodoo and braggadocio useless impotent and loose debates in a so-called presidential system of government we claim to be practicing.

The Executive arm of government has become so powerful that the mandate of the Legislature has simply been mortgaged out of avarice and cowardly mien of our Honourables.

It really bites in the butt to realize that the primary function of our Parliament to make law and oversight the executive arm of government, has been exchanged for "peanuts" and other greedy-induced incentives.

Of course, "the President shall take precedence over all other persons in Ghana" Article 57 Clause 2 reminds us. This must not deify and transfigure our president into a demigod before whom all Ghanaians must bow with his hiring and firing powers!

Unfortunately, our Honourables in the House of Parliament for fear of being fired as Ministers and Member of Parliament (MP) at the same time, have cultivated a culture of silence and continue to goad the Executive arm of government on with every policy they bring to the House.

Indeed, in our local street parlance, it is norm-breaking to see the bone-chewing bull dog barking. The burden of ingratitude, they say, is heavier than the pockets of public office holders.

You must not bite the finger that feeds you has always been the sermon sermonized by "political moralists".

Hence, the appointees of the leader of the Executive, Mr. President, must be loyal to their political benefactor.

How would the Legislature effectively watch over the Executive, and be able to make laws in the interest of the people they represent in Parliament and not to worship and please their paymaster the president who appointed them as ministers?

Some of these appointees include under Article 70:
(a) the Commissioner for Human Rights and Administrative Justice and his Deputies;

(b) the Auditor-General;
(c) the District Assemblies Common Fund Administrator;

(d) the Chairmen and other members of—
(i) the Public Services Commission;
(ii) the Lands Commission;
(iii) the governing bodies of public corporations;
(iv) a National Council for Higher Education howsoever described.

Now, wait for this. The president's power doesn't end there.

Article 78 Clause 1 gives the president the power to appoint his ministers of state to be approved by Members of Parliament who themselves are not exempted from these appointments by the president.

Under the same Article, Clause 1(b) says that "no conflict of interest arises or would arise as a result of the Minister holding that office"

Can you see the source of our tragedy of perpetual anguish and pain?

I see a bundle of contradiction here!
How on earth can a member of Parliament who belongs to a particular political party headed by the president has been appointed as a minister by the leader of his party (the president), work dispassionately without indulging in conflict of interest?

Does that not defeat the function of the Legislature as a watchdog over the Executive?

What system of government are we practising in Ghana?

Since Ghana has no head of State but president, I suspect we are likely mimicking Presidentialism.

But why would Members of Parliament be made ministers to be in bed with the Executive and yet expected to Check the activities the Executive satisfactorily?

How can we make a laughing stock of ourselves in such a manner?

Why is governance being acted in this country and yet we expect development?

Really?
I believe it it time we employ the conventional kindergarten wisdom in dealing with our "alien presidential system of government" that, if you don't have anything to say, keep quiet!

If our Parliament is going to remain a doormat for every president that comes, it is better we scrap it off, or amend the constitution to have Checks and Balances and Separation of Powers fully work.

Else, even after thousand years, Ghana will still be like a rocking chair: it gives you something to do and never goes or takes you anywhere!