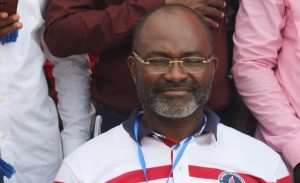 The Outspoken Member of Parliament for Assin Central, Kennedy Agyapong, has distanced himself from the death of Ahmed Hussein-Suale, an investigator with Anas Aremeyaw Anas' Tiger Eye PI.

According to him, he cannot fathom why he would engineer the killing of a person who is irrelevant in his life.

Ahmed was allegedly shot dead in Madina on Wednesday night by two gunmen on a motorbike who shot into the car he was driving.

This occurred months after Assin Central MP exposed him in the aftermath of the #Number12 exposé on corruption in Ghana football over allegations that he [Ahmed] was wicked and must be beaten.

Although no links have been drawn between the MP’s, call to violence and the Wednesday evening murder, the current development has forced some Ghanaians to criticise the controversial MP.

But speaking on Accra-based Neat FM, hours after the murder, Mr. Agyapong said he is well placed and will gain nothing should he take away the life of the investigator.

“This boy is irrelevant to my life. Why would I be stupid and order people to kill him looking at how far God has brought me? He has not offended me in anyway. They should look for those who may be behind this heinous act. This is just cheap propaganda.”

“I don't live a low life. I am focused in everything that I do, that is why I am very loud when I am arguing. I don't compromise on anything. Ahmed has not done anything to me because I am not part of the people he set up, he added.

Responding to concerns that he needs to be invited by the police on circumstances that might have led to the killing of the Tiger Eye member, the legislator expressed his preparedness to meet with the police because he has cause no harm.

“I hear people want the police to question me. Why should the police invite and question me? I am not afraid of anyone. The police should come; I will replay the video to them. I don't have time for Ahmed at all. They are just dodging the issue.”

“I don't plot evil because the evil that men do lives after them. Anas and his team know the wicked things they have done and the enemies they have created for themselves and I am certainly not one. For me, I just wanted to expose Anas for people to know that he is equally corrupt. And, that is exactly what I did. He stepped on the toes of many people. So, if thorough investigations are not done and they rather accuse me of killing the gentleman, then they are dodging. The very people who committed the crime will go scot free”, he stressed.

Anas, in a message on Facebook announced the death, saying Ahmed was hit three times; twice in the chest and once in the neck following which he died on the spot .

Anas Aremeyaw Anas, in a video on his Facebook page, presented the announcement of his colleague's murder within the context of Mr. Agyapong urging residents of Madina to go after Ahmed.

Citi News sources say Ahmed was the lead investigator of the Tiger Eye PI team in the Number 12 exposure on corruption in Ghana football who arranged the meeting with former GFA President Kwesi Nyantakyi in Ghana and abroad.

The journalist has also spoken to Graphic Online about the incident.

“He was just shot and killed; nothing was taken from him”, another member of the Anas' team told Graphic Online.

The police are however yet to comment on the matter, although his remains have been deposited at the Police Hospital.

In a war of words with the investigative journalist in July 2018, Mr. Agyapong went on a show on the TV station he owns, the Madina-based Net 2 TV, and urged residents to beat up Ahmed whenever they saw him.

A photo of Ahmed was also revealed on the show.

Mr. Agyapong has been criticised for inciting violence against Anas and his team.

The MP accused the investigator of being corrupt and evil in the wake of his probe into Ghana football.

He also said Anas deserved to be hanged for his purported corrupt deeds.

Reporters Without Borders came out to say it was alarmed by threats to the life of Anas.

The Ghana Journalists Association (GJA) at the time also called for 24-hour protection for Anas.