Jean Mensah Is Already A Threat To Ghana's Democracy 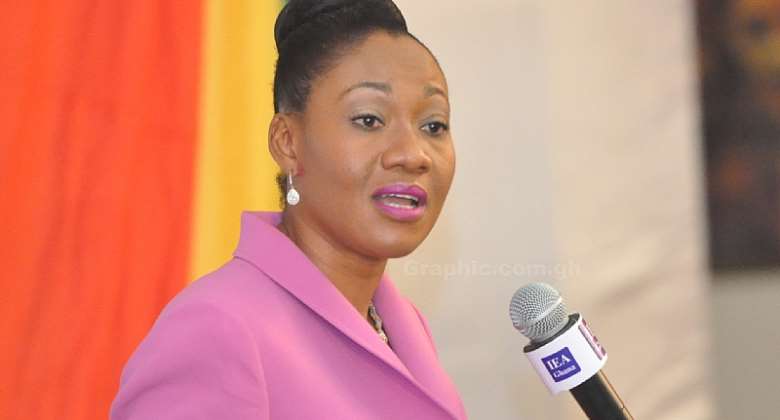 At long last, the much talked about referendum has come to pass. It came with mixed reactions, there are many who felt it wasn't necessary and others who felt it was, and that's fair enough. The just ended exercise was a test to our newly appointed EC Chairperson and her deputies, they had a chance to unite the country towards a common goal, to prove their integrity, competence and professionalism, they've however, failed to deliver by conducting a highly compromised referendum full of malpractices.

To those wondering how elections 2020 is going to be like, yesterday, in Oti region was the answer. The elections in 2020 will lead to lots of intimidation, gerrymandering, killing, and many lives will be lost in the process. Per happenings yesterday, Ghana, is sitting on a keg of gun-powder.

There are lots of tensions in many parts of the country; unprecedented suffering, institutionalised corruption under the chief priest of corruption; the stakes are high, by the time the election draws nearer, it will spread round. Those fanning the embers of the present discord in the EC are not relenting on their oars… No doubt, it will be too dicey.”

It started with crass display of super incompetence from the Ghana police who thought it necessary to arrest people they claimed visited shrines to cast a spell on Mr. President and the Asantehene Otumfour Osei Tutu II. Intriguing, isn't it? I never knew the police had a spiritual detective unit, monitoring and punishing people who visit juju men, and from where they derived that power, I wouldn't know. But genuinely, I think a police service that is always on the run whenever miscreants strike does not have the moral right whatsoever to engage in these kinds of beer parlor provocations.

They intimidated proponents of "No Voters" in the proposed Oti region, which was wrong. They even threatened media men to avoid covering the elections from that part of our country, something that gave them the room to gerrymander the referendum.

The EC also endorsed multiple voting. Issues of biometric verification was completely ignored in the proposed Oti regional referendum, manual verification, double, triple and quadruple voting was the norm. Have we gotten to a point voters can vote without being biometrically verified? Going forward, would that be the new norm?

Videos were circulated viral of some people engaging in elections malpractice under the watch of EC staff.

The death of Democracy was being televised yesterday.

The NPP EC Chairperson is a disaster, the EC is another political Party extention.

We asked for an EC boss not a slay queen. This referendum was a litmus test of the EC Boss's competence and neutrality. They've failed on both fronts. Jean Mensah is playing with the destiny of Ghana!

Jean Mensah is a danger to our stable democracy. If she cannot conduct a 'YES or NO' referendum without infractions, how would she conduct a general election without chaos.

Perhaps, with the exception of the impetuous and sanctimonious NPP and its associates, every other observer and participant in the just-concluded referendum in Oti region agree that the conduct of Electoral Commission and security agents was not above board. And, as would be expected, party members magnified the impunity.

President Akufo-Addo is institutionalising sectionalism per his style demonstrated in the creation of new regions, deliberately, ignoring highly populated regions like Ashanti and Eastern regions and in turn rewarding them with numerous MMDA's as well as millions of dollars. This leadership style that has elevated sectionalism to near state policy will not only leave the country divided, but also enthroned with mediocrity over competence, with a certain tendency of leaving Ghanaians pauperised, insecure and their commonwealth plundered. Let's watch it!

Even though the NPP in Ghana have reduced the EC boss position to a personality contest with a facade of geo-political interests - devoid of issues and leadership – the 2020 general election poses a daunting challenge, if the actors sincerely care about the survival of the nation. There is no better scientific evidence to evaluate the state of the nation than a brief examination of sound-bites on trending socio-political issues, beginning from the most recent.

Jean Mensah has failed, she is an embarrassment leading Ghana to a “funeral parlour” - for opportunistic considerations in 2020.

Things have fallen apart in the EC; the centre cannot hold;

Mere anarchy would be loosed upon us in 2020 and it would Slouche towards Bethlehem! Lets be guided, is either she goes down or we call for wider stakeholder consultations locally and internationally.

A word to the EC, is enough for democracy!!

SSNIT Scandal: Court to decide on mode of trial on December ...
37 minutes ago