Construction Business And Corruption Are Twins 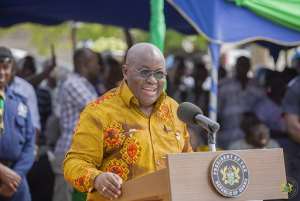 Therefore, it is likely that Nana Akufo will not pay attention to those opposing the building of the Cathedral. Why Nana Akufo Addo wouldn't like to listen to the highest percentage of the Ghanaian population against the building of a Cathedral if he didn't reject their votes?

Corruption in Africa takes place in various ways, but massively through these three channels: Inflation of the cost of constructional projects, taking bribes before awarding of contracts and over-invoice.

The construction business is one of the most corrupt in the world. This conclusion was made according to the results of a study by the audit company Grant Thornton. The total amount of bribes that contractors and developers have to pay can be as high as $ 860 billion per year cumulatively for all countries.

The embezzlement of funds in the construction industry occurs literally at every stage, starting with the definition of a site for construction, tenders, execution of permits in a number of instances, multimillion investments, determination of contractors and subcontractors and much more.

Each level is fertile ground for the prosperity of bribery and corruption. In the chain of purchase of building materials, there are a lot of intermediaries, and money is often spent for other purposes.

The cutting means significantly reducing the quality of building materials in favour of cheaper ones not stated in the official estimate. The economic crisis has only aggravated the situation. As a result, the buyer suffers, paying for poor quality materials.

The losses through corruption range between 10 and 30%, which together with mismanagement and inefficiency affect the economy of a country. These high percentage of frauds must be seriously taking into consideration why eradicating corruption would make a big difference for the industry and for the overall economy.

Bribery before contract
Bribery is one of the manifestations of corruption. In the legal sense, corruption is the abuse of power to gain personal benefits and most commonly to influence a contract award or the execution of a contract. Kickbacks are often paid incrementally by contractors when contracts are awarded. This takes place in exchange for large contract awards in international development projects.

Bribery is the most dangerous form of corruption. The danger of it is in particular audacity and cynicism of the bribe taker, who turns power into a subject of trade. He not only uses his power in defiance of the interests of society and the state, who granted these powers but also sells them to outsiders. Bribery as a manifestation of corruption is characterized by all of its main features, deriving benefits from official position, reasonable, a defeat of the apparatus of public authority.

Over invoice corruption
Corrupt governments often during exports of national resources can commit fraud by knowingly submitting false, inflated or duplicate invoices with the intent to defraud, either acting alone or in collusion with contracting personnel as the result of corruption.

False invoices are also associated with invoices for goods or services not rendered. Duplicate invoices are fraudulent if issued knowingly with the intent to defraud. Duplicate, false or inflated invoices often are used to generate funds for bribe payments.

Fight against corruption in construction and housing

In the framework of the fight against corruption, some governments introduced a unified state pricing system in construction, the creation of which is entrusted to the ministry in charge of the construction. Among other things, the system will display and constantly update information on the cost of building materials specified by manufacturers.

As a result, it is no longer possible to win from an overpriced estimate, by installing inferior building materials. The introduction of the so-called BIM technology can also help in the prevention of bribery.

Technology implies information modeling of a construction object, that is, a detailed description of building materials, all types of contract work, with an indication of the cost even at the planning stage of building construction.

Any deviation from the original approved budget is clearly reflected in the three-dimensional model of the building in real time, even after its commissioning.