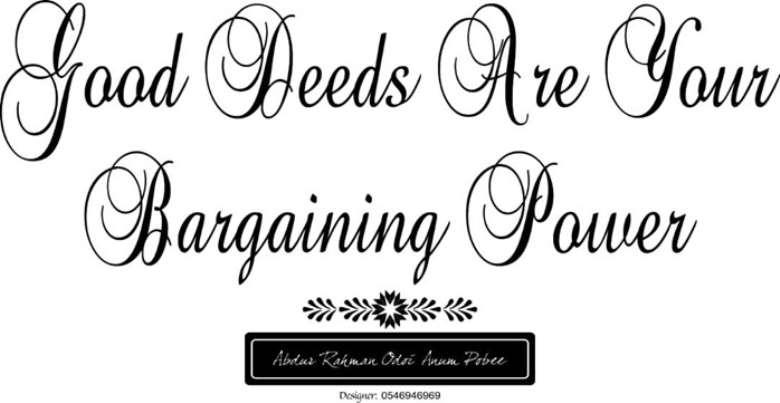 What is the essence of growing old without being welcomed to Paradise? While this multi-billion question is still unanswered, you would still hear people pontificating that they are enjoying life or have really enjoyed it to its fullest. This is the unknown and absurdly ominous perception of mankind which was programmed by the corrupted civilization! You would only enjoy this life to its least and not the fullest. An everlasting enjoyment is that which awaits us aftermath of death. The life of Paradise transcends the pomp and glitter of this transient life. It is very cheering to see it written boldly on an obituary ‘99 years old’ [Dead but not forgotten], basically to ignite an inundated euphoria that the person's death was a real deserving one! Sometimes, transition is another appendage that follows to make us believe that all is well with the soul of the departed person!

Little have we ever bothered our conscience with the real eternal peace of those whose lifetime are prolonged as they passed away at a very old age? Some of them died at an old age but their time and stayed on earth was classified by the two ‘Ws’ [wretched and wasteful]! Imaging a young boy passes away at the age of 21 but had done all that is required of him by the Supreme Being and simultaneously, an old man also died at the age of 90, after having flouted almost all the necessary chances he had to depict a goodly life! Amid the two candidates, whose death should be rejoiced or probably would held a meaning? Do not let the figures dilute your judgement; how old was Jesus (as) when he was crucified or killed per the Bible and where did he end up at? King Herod’s age could also be considered and that of Nebuchadnezzar, they had all the breathing moments, yet they died as tyrannical oppressors and rogues!

The point is that we have broken all the religious structures left for us by the able Prophets. And that is why most of us are into an apocryphal religious life. So, aging has become a measure of success and ingenuity in this life of ours. Long age could be defined as an opportunity that when grabbed and work accordingly, Allah would raise your status in Paradise, otherwise it is one of the liabilities! The basic credence of life itself is a transition to the perennial abode prepared for the righteous. If you could not fulfil the purpose of life which is nothing other than being dutiful to your Lord, irrespective of the age you are slashed on this earth, it becomes a useless one after death has shoved you precipitately into your grave. One day in the presence of our Lord is far superior to the 70 years accorded for man’s temporal stay on this earth. Age counts not but good deeds count, which is why if you are a young man, you must need be ready for the ‘inevitable and impromptus’ because it acts understandably!

Whenever you start aging and developing grey hair, never glory about the staggering figures and the supposedly white coloured hairs; however much sophisticatedly embellishing it may look. Mankind is like a corn in corn mill machine. The corns at the top think it would not get to their turn when the other corns are being grinded but the moment the grinder gets to it, it grinds it all! We should do more good deeds that if we are asked to count it, because of its immensity in commensuration to the word infinite, we would not be able to give any statistics. It shows that you aged with goodly deeds; age does not take you to heaven, but good deed does.

We do bemoan when death strikes suddenly because we know we have not put more act of goodness forth that would get us to be conveyed to bliss after death. And thus Allah said in [Qur'an 2:96]: "And you will most certainly find them the greediest of men for life (greedier) than even those who are polytheists; every one of them loves that he should be granted a life of a thousand years, and he being granted a long life will in no way remove him further off from the chastisement of hell, and Allah sees what they do". If you want to do a falsification test for this verse, gather like twenty (20) people including young ones and old men and women; ask them that, who among them is ready for death now?

Remember that as long age has made you developed grey hairs; let your good deeds be much more than the grey hairs, for the only time long age would be meaningful is when it accedes with good deeds.

For jobs in Ghana visit jobsearchgh.com