Has The African White Genocide Started? 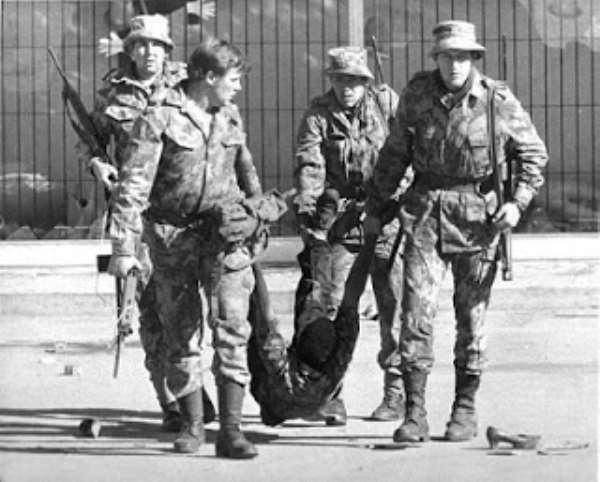 The idea of a 'White genocide' in Africa is a frequent talking point among white governments and white nationalists worldwide. And it all started in Libya, after the killing of the American Ambassador Christopher Stevens and retraction of American Centers for Disease Control CDC healthcare workers from Congo.

Moreover, the Congolese rebel groups started to attack Ebola healthcare centers, killing white healthcare workers and blacks are those who carry out the dirty work. So, my remark is: “Has The African-White Genocide Started?”

My remark concerns the fact that when are we going to pay the price for abusing, raping, using Africans as guinea pigs, torture, slavery and the killing of Africans by the millions, like lunatic Belgium King Leopold II? And nowadays medical trial and error studies concerning experimental Ebola and HIV vaccines are forbidden in western countries and America but applicable in Africa.

It's about time to give back the African continent to its African roots.

The explosion of violence against white farmers in South Africa

Another remark lies in the outbreak of violence in South Africa, a country that suffers most under Apartheid and HIV. According to “White” officials, there are no reliable figures that suggest that white farmers are being targeted in particular or that they are at a disproportionate risk of being killed.

Fact-checkers have widely identified the notion of a "white genocide" in South Africa as a falsehood or myth. But in the meanwhile, thousands of white farmers and whites are killed and again blacks are responsible for the death of the white conquerors.

In August 2018, Fox News Tucker Carlson commented that the South African government exactly as I thought on the disproportionately targeted white farmers during its ongoing land reform effort due to anti-white racism.

He also criticized political “elites”, who are purportedly concerned about racism, “paying no attention” to the “racist government of South Africa.”

Hahaha... And there they are again, as Donald Trump stated about fake news before, news agencies like BBC News, CBS News, CNN, Associated Press, PolitiFact, The New York Times and The Wall Street Journal are stumbling over each other in order to described Carlson's segment as false or misleading. But news agencies around the world I've got another remark.

South African President Matamela Cyril Ramaphosa, a politician and the fifth President of South Africa who became president following the resignation of a very corrupt president Jacob Zuma, who can be compared with Congo's president Joseph Kabila.

Ramaphosa had proposed a constitutional amendment that would allow some land to be expropriated without compensation; however, that amendment had not yet been voted upon.

But, for nearly 50 years, starting in the late 1940s, the black Africans who make up the majority of South Africa’s population were subjected to an official government policy of institutionalized political, economic discrimination and strict racial segregation by the white European minority who ruled the country under a system known as Apartheid.

In practice meaning, discrimination against black Africans had gone on for centuries before it ever became official policy.

Among other infringements on their basic rights, black South Africans were legally barred from living on, operating businesses in, or owning land in vast swaths of the country that were set aside for whites only. By the time apartheid formally ended in 1994, nearly 90% of all land in the country was owned by whites, despite the fact that they made up just 10% of the population.

Trump's tweet, his remark, of course, was denounced as “misinformed” by the South African government, which stated that it would address the matter through diplomatic channels.

Nevertheless, President Donald Trump tried to move the conversation away from his former lawyer implicating him in federal crimes by tweeting out a common talking point of white nationalists and neo-Nazis like Wouter Basson.

THE DEVIL-APARTHEID KILLERS OF SOUTH AFRICA

On the sprawling maize fields outside Johannesburg, many white families know the full horror of the South African farm attacks that are so common they no longer rate a headline. Only during the calendar year of 2017, there were 84 farm murders that we could verify," says Ernst Roets, AfriForum's deputy CEO. But other figures show over a hundred farmers are killed by fighters called criminals of course.

In recent months, thanks largely to publicity drives by well-funded Afrikaner pressure groups like AfriForum, there has been an international outcry about the killing of white farmers in South Africa. Right-wing websites and radio shock jocks in the United States, and in parts of Europe, talk freely about “White Genocide”.

Afriform
Afriform, who claims to be a civil rights organization, has been questioned in the South African media, and South African and international media often characterize Afriforum as a white nationalist or white supremacist group.

Its leader, Kallie Kriel, was previously a member of the Conservative Party, and a leader of the Freedom Front Plus (FF+) youth wing and a large number of its executive leadership were formerly associated with Freedom Front Plus.

AfriForum is of the opinion that farm murders should be declared a priority crime, and has raised widespread local awareness and increasing international awareness of the problem by means of several campaigns, including the ‘Stop the Murders’ campaign.

But the Government of South Africa and the right-wing Afrikaner rights group AfriForum maintain that farm attacks are part of a broader crime problem in South Africa and according to them they do not have a racial motivation.

In a cable sent to the American State Department, they concluded that there was “no evidence that murders on farms specifically target white people or are politically motivated” and that some journalists and lobby groups have simplified complex land disputes to serve their own ends.

Indians demonstrating against Apartheid
If Trump is afraid of a “White Genocide” that isn't a very difficult remark to make because a white genocide doesn't stop on the borders of South Africa.

Congolese rebel group knows exactly what is going on in this damned world and they will use the man-made disease Ebola to spread around the world if possible in order to let them payback for what they have created.

One thing about many of my remarks or predictions will be certain, Ebola will spread and cause a pandemic at the end. Hopefully, something positive will emerge from this devilish disease namely, a widespread independent investigation about emerging viruses which arrived out of the blue, appearing first in Crimea in 1943, to end up in the Democratic Republic Congo killing mainly black Africans and causing a “Black Genocide.”