In Remembrance Of Umaru Musa Yar’Adua 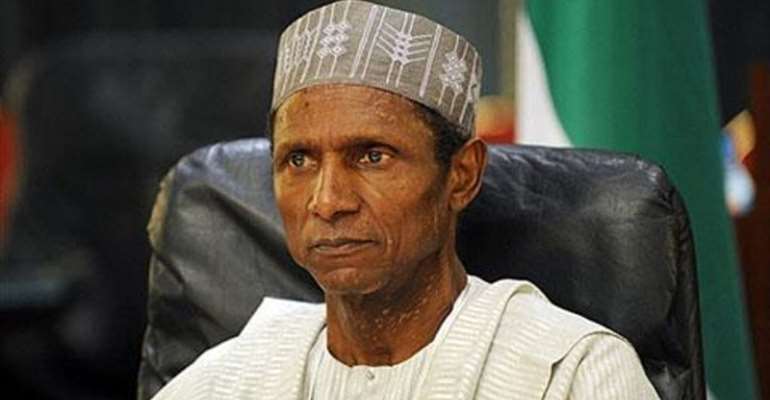 The name “Yar’Adua” is a household name and especially on the list of leadership in Nigeria. When “Umaru Musa” is added, it becomes a more specific name that attracts attention in Nigeria and beyond. And when it is pronounced “Umaruu”, it calls to memory the specific way former President Olusegun Obasanjo called out to Umaru Musa Yar’Adua who was still alive on sick bed in Germany when there were wild speculations that Umaru was dead. Obasanjo held a telephone conversation with Umaru as a proof to Nigerians that his successor had not passed away.

I want to recall with pains the death of a great man, a leader and a President whom Nigerians will always yearn to remember, former President Umaru Musa Yar’Adua. My remembrance for the great leader revives my memory of the survival of his kinsman, the current leader of Nigeria, President Muhammadu Buhari whose destiny to lead Nigeria is set on the tripod of, like his late kinsman, his love for God, love for his country Nigeria, and love for humanity at large.

Not all Nigerian leaders had these leadership charismas. Not all the leaders feared God who alone knows exactly the level of damages they inflicted on the country. Not all of them actually loved Nigeria which is still suffering from the mishandling of her affairs during their periods of leadership. And not all of them largely attached humanity to their governance.

I was hurt by Yar’Adua’s exit. But it was not a painful end. It was a well-fulfilled life that ended as God has preordained. To us as humans, it was a sorrow. O death! Who knows your trust to the humans? Who can comprehend your elegant stride? Who can tell of your timelessness, nay timeliness? Yar’Adua left, leaving a moving train that would have taken Nigeria at least nearer to the Promised Land. Life continued until his kinsman, a man with broad heart, came on board to clean up the messes he could not cleanse and the ones put up after him. If truth is to be told, I think I have the audacity to praise Katsina people for their love for Nigeria and their political sagacity and maturity. The two and half years that Yar’Adua spent on the throne in Aso Rock were of actions and delivery of democratic dividends. Those were the years which Nigeria witnessed some developmental strides under the Peoples Democratic Party (PDP).

Not really interested in ranking Nigeria’s past leaders, I can vouch that Alhaji Shehu Shagari from Sokoto state did his best despite he was surrounded by treasury looters. Late Gen. Murtala Muhammad did well in his quest to put Nigeria on the track of development, though the evil elements ganged up against and eliminated him. Gen. Yakubu Gowon did very well and sustained the national image, though the Biafran war belittled his bold plans to develop Nigeria. Gen. Sani Abacha was also a master strategist, though the same gang up of today was against him. And I ask: Which type of the human do Nigerians want to satisfy and take them out of the dungeons of bad governance, bad infrastructure, bad economy and bad image?

Because leadership in Nigeria is a very hard one, all other leaders tried their best. But I see a link in the charismatic leadership style of Yar’Adua and Buhari, a clear indication that good personality begets good leadership and not affiliation to any group, being it political, religious or ethnic. Every man is distinct. Goodluck Ebele Jonathan was also a leader with a good and large heart, if not that he was surrounded by treasury looters and was underdone by the overbearing influence of his party. Yar’Adua was, indeed to me, a superb leader from an origin that remains a good reference point in Nigerian politics.

In my modest qualification, Yar’Adua had a very good vision for Nigeria. Likewise, Buhari in his own style has shown his goodness with very good dream for Nigeria and Nigerians. Each time I ponder in retrospect over Nigeria’s leadership, I pass through some eras with keen interest and yearnings. I find that good leaders in Nigeria never lasted for a long time. Stability in governance yields development which in turn requires times. Except for the ordination of God, Buhari would have ended as his kinsman. But it is clear that God has a design for Nigeria under him and God’s willing, his eight years as Nigeria’s President will tell the stories of a man who “came, saw and conquered”.

When Yar’ adua died, I wept profusely. I was one of his aficionados, though he did not know me in person nor did I benefit privately from him other than the mission and good works he had and executed for the country. I poetized for him in my media outburst titled: “Adieu, President Yar’Adua” especially on the Guardian Newspapers of May 8, 2010. I said “Sir: Now the time has come; Now you have done and gone; Now history begins to reflect; Now Nigerians mourn; How come life seems shorter; For them who are humane; But longer for them who; Tread as gods on earth?; Yar’Adua, you’ve parted; Just off sight man’s eye; But you live, so long man recalls your good arts; A second old child is due for recall a Divine Decree; 1951-2010 is enough for goodness to show; A child of destiny, what else!; Allah made you and gave you; And He gives and takes; Not when man is consulted; O if not ordained!; Man must taste the cup; How could our beloved leader; Leave now we need him most; But behold! The greatest man died; And great men are in queue; Yet we mourn all times, unprepared; Ours is just standing by; You have gone to answer Allah; Because you have done as human; Even as we grieve for this loss; Do we rejoice with the angels!; You have done for Nigeria; You have done for Africa; You have done for humanity; And you have done for us; Adieu, Mr. Rule of Law!; Adieu, Umar Al-Farouq!; Now we pray and on forever; Allah’s peace be unto you. May your gentle soul continue rest in perfect peace, Sir.”

Yar’Adua spent a short time and achieved much, even as looters were eating up the fabrics of the nation. He was not a saint but he had the political will to serve the country. He did some things that endeared him to the citizens. That is the target of every responsible leader who should run after the happiness of his people. It is unlike proclaiming merely in the media that Nigerians are the happiest people on earth without even a scientific proof. He increased the minimum wage of civil servants at the time it was impossible to keep up with the peanuts called salary. He increased the salaries of men of the armed forces. He increased the allowances of members of the National Youth Service Scheme (NYSC). He increased the Police and paramilitary salaries. He was Mr. Increase for the sake of putting smiles on Nigerian workers and uplifting their dedication to service and confidence in the government.

For the first time or so, he reduced the price of patrol to avoid the economic damages that would have resulted from any industrial action by the Nigerian workers. Despite the increase in workers’ salaries, there was a kind of control over prices of food stuff. He made palpable efforts in the infrastructural development. He was Mr. Stabilizer as he tried hard to ensure that the sufferings by Nigerians were mitigated through various programmes. He was named Mr. Rule of Law because he believed that the laws of Nigeria should be supreme and he practically allowed the law to take its course on most national matter.

In the security sector, especially the Niger Delta that was on fire throughout the tenure(s) of his predecessor, he was a diplomatic strategist. He granted amnesty to Niger Delta militants in June 2009, a move that drastically shutdown militancy in the region and shot up oil productivity and revenues for Nigeria. Yar’Adua, declared: “…our twin challenge of democratic consolidation and economic regeneration calls for unbridled patriotism and single-minded, people-focused, result-oriented, resolute and courageous leadership at all levels. We cannot afford to fail. Let us use today’s proclamation of amnesty to herald a new beginning for our fatherland”.

Under his hand, the amnesty proclamation was endorsed. Let me quote this document that remains very vital as long as Nigeria’s dependence on oil lasts.: “Pursuant to section 175 of the constitution of Nigeria, whereas the Government of the Federal Republic of Nigeria acknowledges that the challenges of the Niger Delta arose mainly from the inadequacies of previous attempts at meeting the yearnings and aspiration of the people, and have set in motion machinery for the sustainable development of the Niger Delta States; Whereas certain elements of the Niger Delta populace have resorted to unlawful means of agitation for the development of the region including militancy thereby threatening peace, security, order and good governance and jeopardizing the economy of the nation; Whereas the Government realizes that many of the militants are able-bodied youths whose energies could be harnessed for the development of the Niger Delta and the nation at large; Whereas the Government desires that all persons who have directly or indirectly participated in militancy in the Niger Delta should return to respect constituted authority; and Whereas many persons who had so engaged in militancy now desire to apply for and obtain amnesty and pardon.”

“Now therefore, I, Umaru Musa Yar’Adua, President of the Federal Republic of Nigeria, after due consultation with the Council of States and in exercise of the powers conferred upon me by the provisions of Section 175 of the Constitution of the Federal Republic of Nigeria, make the following proclamation: I hereby grant amnesty and unconditional pardon to all persons who have directly or indirectly participated in the commission of offences associated with militant activities in the Niger Delta. The pardon shall take effect upon the surrender and handing over of all equipment, weapons, arms and ammunition and execution of the renunciation of militancy forms specified in the schedule hereto, by the affected persons at the nearest collection center established for the purpose of Government in each of the Niger Delta States; The unconditional pardon granted pursuant to this proclamation shall extend to all persons presently being prosecuted for offences associated with militant activities; and This proclamation shall cease to have effect from Sunday, 4thOctober 2009.” Buhari is improving on this goal.

Yar’Adua has gone and like I described myself in my poetic expression: “Sorrow for Myself”, “So happy my debtors will be; And they alone will pray for me; So sad my creditors will be; And the whole world has debts on me; My lovers sure will smile and cry; Such cries which very soonest dry; I’ll hear them as I’ll helpless lie; Speechless, hard, even if I try; They will wash and wrap me in whole; And will dump me in deadened hole; They will turn from me to their goal; And will not learn from my gone soul”.

Yar’Adua was a hero and indeed, he made indelible prints in the history of Nigeria’s leadership. May his soul rest in perfect peace! Ameen.