Much Ado About Obasanjo Atiku Reunion 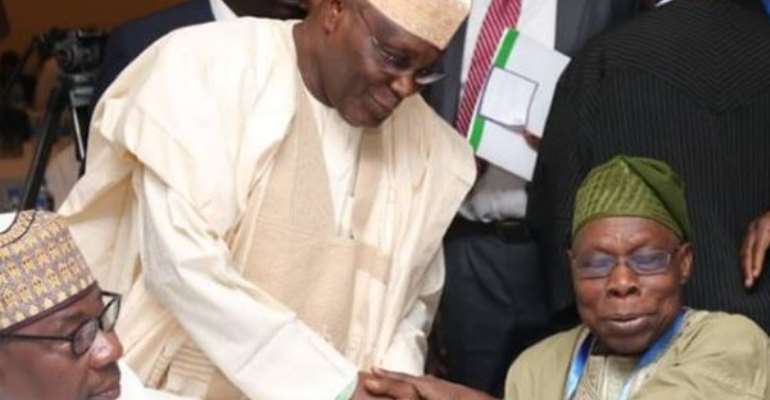 Before the 2003 presidential elections, former president Olusegun Obasanjo who was seeking reelection was humbled by his then vice, Atiku Abubakar. Atiku was then a demigod and Obasanjo had to bow before him for blessing. There were clear indications that Obasanjo would have been proportionately defeated if he did not recognize Atiku as his then master-vice. I do not really want to dabble into the internal rancor that existed between the two. It suffices to say that both remained enemies throughout their eight years as the number one and two citizens of Nigeria. But I know that Obasanjo brought Atiku to deputize him despite the fact that Atiku was already a victorious governor of Adamawa state in 1999. The simple reason was to give way to Boni Haruna to govern the state.

Obasanjo was a traveler president in his first four years. I recall as a student leader in Egypt, he met with us in the Nigerian Embassy in Cairo with all the promises to repair Nigeria. So, Atiku was able to utilize the opportunity from his absence to assert full grip on their party, PDP, and government functionaries. All the travels by Obasanjo did not yield the best results to fix Nigeria. He learnt his lessons and played the fox to get his second term. Within the four years that followed, Obasanjo had mastered the game and became a political colossus in Nigeria. Recall his status in 1999 when he was made the president. Throughout his eight as president, it is hard to find a span of peaceful period he had with his vice Atiku or his legislative or judicial counterparts.

He had become powerful that his words or actions would not be challenged. He became power-drunk like his vice and mustered the plan for a third term, against the constitution. His men in the legislative made impact but his then permanent rivalry, Atiku, with the support of some powerful governors succeeded in thwarting the plan. Obasanjo dealt with perceived political foes and they paid him back in his own coins at the right time. That was another great victory for Atiku as a master-vice.

I am, therefore, not surprised at all that Obasanjo can ever reunite with Atiku. He has been a controversial inconsistent and power-drunk politician. Such politicians are interested in what they stand to gain from every situation. Some people mistakenly think that Obasanjo’s support for Buhari in the 2015 presidential election was fully instrumental to Buhari’s victory. Not really undermining his single vote if he did vote for Buhari and since every single vote is required for a victory, I am pretty sure that it was not. Obasanjo had initially opposed Buhari, knowing realizing Buhari’s worth and strength, until he, being a smart politician, saw the handwriting on the wall that Buhari‘s victory was sure. His pretense is now exposed, having torn the PDP card in the open; having declared to withdraw support for PDP if it presented Atiku as its flag-bearer and having castigated Atiku in a manner that portrayed boundless enmity.

In his book “My Watch” Volume 2, pages 31-32, Obasanjo ran Atiku down. His antecedence of hitting hard on his enemies without thinking of its future implication, Obasanjo thrashed Atiku, declaring thus: “What I did not know, which came out glaringly later, was his parental background which was somewhat shadowy, his propensity to corruption, his tendency to disloyalty, his inability to say and stick to the truth all the time, a propensity for poor judgment, his belief and reliance on marabouts, his lack of transparency, his trust in money to buy his way out on all issues and his readiness to sacrifice morality, integrity, propriety truth and national interest for self and selfish interest”.

These are very weighty words that are unforgettable, descriptions that cannot be easily swallowed by any responsible human. Unfortunately, the words are in print and in possession of people from across the world. To Obasanjo, Akitu’s origin is “shadowy”. Furthermore, according to Obasanjo, Atiku has inborn penchant for corruption, highhandedness – having made him bow down before him – Atiku is power-drunk and loves self above national interest. If Obasanjo is a man with conscience, Atiku is a condemned man to him. Atiku has remained a political figure to reckon with, anyway. He has proven to always be ahead of Obasanjo in politics.

However, this contrived reunion may be another opportunity for Atiku to deal with his old foe. Obasanjo had tarnished Atiku’s image with multiple accusations of corruption. If it happens that he succeeds to preside over Nigeria, Obasanjo cannot escape his hammer. Obasanjo will attempt to exert too much influence on his government which Atiku will be compelled to exert his power as the highest authority like Obasanjo did to him. The fight may start too earlier than expected. But I do not think Atiku can buy every Nigerian voter to win as Obasanjo proclaimed on Atiku’s “trust in money to buy his way out on all issues and his readiness to sacrifice morality”. Obasanjo said that God will not forgive him if he supports Atiku. I do not know the God he worships. But whatever god he referred to is watchful and probably angry by now.

Insights into the political marriage offer by Obasanjo to Atiku show that it was influenced and not Obasanjo’s personal decision. For the first time, I came to realize that Obasanjo can ever accept advice. I used to think he is Mr. Know-all, having watched his leadership style as the president of Nigeria. He would request opinions, send for investigations but do his own bidding. Apart from the missing financial frugality amongst his lieutenants, corporate responsibility and goal targeting were lacking. The best success stories he enjoined together with Atiku were the “chop I chop syndrome”, selling off national assets and apportioning national assets to self by proxies and to cronies. The sharing and apportioning moments were probably the times they forgot their quarrels, as it is the case with almost all Nigerian politicians and by extension the traditional and religious leaders. God is watching!

Obasanjo has remained himself, but the pressure from the Yoruba socio-cultural group, Afenifere could have forced him to “bless” Atiku.

Attendees of the “marriage ceremony” can offer further insights. The Catholic Archbishop of Sokoto Dioceses, Bishop Matthew Kukah; Founder of Living Faith Church, Pastor David Oyedepo; a leading Muslim cleric, Sheikh Ibrahim Gumi and Afenifere leader, Chief Ayo Adebanjo were or prominence. It is Obasanjo who made Kukah a lord in northern Nigeria. Kukah has owned up to be the central actor in the reunion project. All other explanations over his ignorance of the political implication of rejoining the two old political foes at this critical moment in Nigeria’s electioneering processes are inconsequential. All those who may have influenced Obasanjo, including the known military retired generals opposing Buhari, definitely did not do so in good faith. They are not interested in Nigeria’s peace, unity and development. Their interests are in any quick gains that they can make from government. Or rather, their perpetual grip on the economy of Nigeria. Any attempt by Buhari to relieve them of the burdens they have tactically placed on Nigeria’s economy and development attracts their revolution.

Let me quickly relate few insights into some of Obasanjo’s lobbyists. The pastor and the Imam can be described as people bought over to give religious coloration in the Atiku’s aspiration. There are media claims that Atiku gave millions of dollars to the Pastor. As for the Afenifere chieftain, I picked interest in a post by one Ugo Egbujo on a media group I belong to. Adebanjo few months ago in his book titled: “Telling It as It Is” described Obasanjo as a White Sepulchre, a corrupt-ridden who has no moral right to accuse anyone of corruption. In chapter 13 of the book, he catalogued how Obasanjo humiliated Awolowo, dealt with his own Yoruba people and performed worse than Abacha. Yet, he followed Atiku to the White Sepulchre to whitewash Atiku with the belief that his dream of restructuring Nigeria will be actualized by Atiku. In that memoir, he said Obasanjo was duplicitous. He prophesied that when a real government came into power, they will seize Obasabjo’s library and properties.

According to Thisday Newspaper reports quoting an Aferifere, the lobbyists told Obasanjo that he alone could repair the damage he had done to Atiku. And that if he did not want Buhari to win, then all hands must be on deck to queue behind a viable candidate, which they argued was Atiku. He grudgingly agreed, saying Atiku had actually requested for a meeting with him but that he was not too keen. At that stage Baba Adebanjo appealed to him to grant Atiku audience.

The source said that Afenifere is pressing on its partners, the Ohanaeze Ndigbo, the Middle Belt Forum and the South-South leaders to support Atiku so as to send a positive signal to the international community that it claims is already disgruntled with Buhari. And according to Obasanjo, Atiku has a lot of nationally and internationally fences to mend, “I am convinced that if you continue with the attitude that brought you here with these distinguished leaders of goodwill, with remorse and contrite heart, the rest of the coast within and outside the country can be cleared.” Obasanjo pleaded with Atiku to uphold truth, integrity, principles, morality and fight corruption, crimes and insurgency. Which of these has Buhari not practically sustained? Why does Obasanjo and his cohorts now stand against Buhari?

While all these melodrama are on, a former aide of ex-Presidents Jonathan and Obasanjo, Doyin Okupe, believes that Nigeria will not make progress if Atiku succeeds in his presidential ambition. Writing on Twitter, Okupe said that if Atiku rules Nigeria for one day, it will take Nigerians 10 years to recover. Adeola Adedeji postulated on his facebook page that Nigerians tolerated thieves for 16 years but find it difficult to tolerate an honest man for three years. He concluded that 2019 is all about Buhari and coalitions and amalgamation of thieves, and the side any Nigerian belongs indicates the person’s character.

And my respect for the Nobel Laureate, Prof. Wole Soyinka is profound because of his blunt truth amidst quackery stand by great Nigerians on decisive issues about Nigeria. The don has warned Nigerians, especially the youths to refocus their attention to ensure safety of their future. He has declared that “only in Nigeria will thieves be regrouping to loot again and the youths whose future will be stolen will be celebrating it…” Nigerians must shine their eyes and support integrity and selfless citizens in 2019, not people that will share the remaining national assets amongst themselves and mortgage the future of the citizenry.