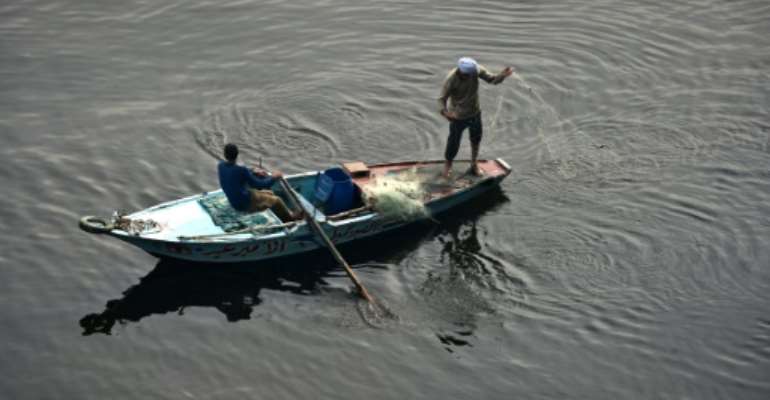 A file pictures shows an Egyptian fishermen throwing a net into the Nile river in Cairo on December 17, 2014. By MOHAMED EL-SHAHED (AFP/File)

Egyptians practised fish farming more than 3,500 years ago, the earliest evidence of such activity worldwide according to a joint German-Israeli study released on Tuesday.

Scientists studied 100 fish teeth found at archaeological sites across modern-day Israel to conclude they had been plucked from a lagoon in Egypt's Sinai thousands of years ago.

"The sample of teeth covered a chronological period extending over 10,000 years, from the early Neolithic period through to the early Islamic period," said a statement from Israel's Haifa University, one of the participants in the study.

Of those samples, some were from about 3,500 years ago.

Farmers at the time found a lagoon which fish were entering and barricaded it for a few months, Guy Bar-Oz, one of the authors of the report and archaeology professor at the University of Haifa.

Afterwards "you can easily harvest them," the academic explained of a method still used in the same Sinai lagoon.

The Haifa academics worked alongside those from German universities in Mainz and Gottingen to deduce their findings from the teeth of gilthead sea bream.

Through studying the different types of oxygen isotopes in the teeth, scientists deduced that they were "spending at least four months in the closed lagoon", Bar-Oz told AFP.

The majority of the fish found by the researchers came from aquaculture and not local fishing.

Irit Zohar, from the University of Haifa and co-author of the study, said the size of fish standardised around 3,500 years ago and those imported from Egypt were all "the size of a plate".

"Exactly what we observe of the fish bred in modern aquaculture," she said.

Egypt became a "superpower in aquaculture" at that time, according to Bar-Oz.

Scientists believe fish farming was practised in China 4,000 years ago, although Bar-Oz said no evidence has yet been produced to prove the theory.

I won’t bow to pressure to make Parliament a ‘rubber stamp o...
27 minutes ago