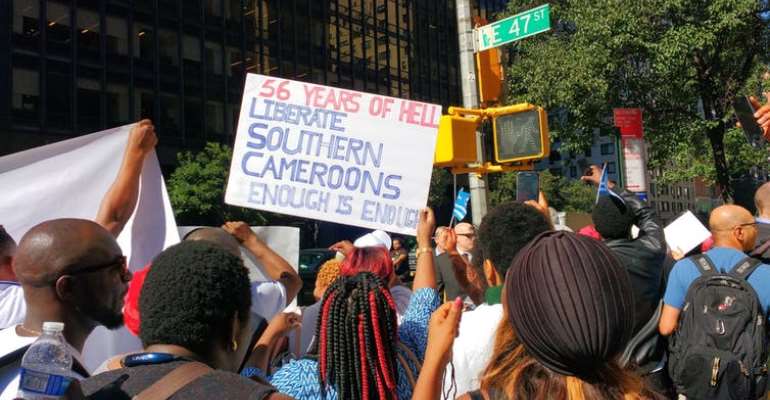 A vicious war of secession has ravaged the two Anglophone regions of Cameroon since January 2018. Non-state militias warring with the government aim to create an independent Ambazonian state. While central Africa has seen its share of wars of secession (the majority of which culminate in an agreement between the parties), aspects of Cameroon’s secessionists distinguish them, and this war, from others.

But Anglophone Cameroonians overwhelmingly view secessionists positively. This is so even when they object to their tactics. For instance, secessionists call for Ghost Towns, or city-wide strikes every Monday. They call, too, for boycotting all primary and secondary schools. A secondary school teacher in the Southwest Anglophone capital region of Buea noted, “I don’t agree with preventing children from going to school, but I support the secessionists’ aims. Therefore, I tolerate it.” Others, like this 35-year-old entrepreneur in Buea, say, “I completely support all actions the freedom fighters take, and I am honored to keep my daughter from school. Students are just pawns of the Cameroonian president.” When asked whether targeting children and teachers was legitimate he added, “Yes, they are supporting the Biya regime.”

During the first few months of the conflict, the secessionists generally targeted only those who disobeyed their orders, or who they suspected had government affiliations. This has changed drastically in recent months. In villages and cities spanning both Anglophone regions, the secessionists extort, kidnap, and rape civilians. Public opinion seems increasingly impervious to such offenses. The secessionists lack a central command, and so when rape or extortion occurs people are quick to pin it on imposters, not the real secessionists.

Such deflections are not entirely without merit. There are more than 20 secessionist groups fighting in the two Anglophone regions at the time of this writing in September of 2018. The majority of these arose during the summer, correlating directly with the violence spike against civilians. Additionally, the so-called interim Ambazonian government has condemned all attacks and denied all responsibility. Such refutations are near impossible to verify given the informal secessionist structure which often as not is controlled from outside Cameroon.

Interestingly, purported, legitimate secessionists have punished others for abusing civilians. In August, secessionist leaders in Buea apprehended, publicly beat, and disposed of four people. The four were extorting locals supposedly on behalf of the secessionists. At the same time, however, individuals claiming separatist affiliations continue extorting civilians without punishment.

Max Bone is a political analyst at Rise to Peace in Washington, D.C. where he is a student at the Elliott School of International Affairs at the George Washington University. He has traveled extensively in sub-Saharan Africa, recently spending several months in Cameroon. His twitter is @maxbone55.

Inside Politics: Political Quotes
Catch up with all the political quotes from our politicians.
Sponsored
More Opinion
Modern Ghana Links
Where are the Men we once called fathers?
Remember, you were once an alien in a foreign land
Will the pandemic have a significant environmental impact?
Reappointment of Akosua Frema Osei-Opare, a victory for women
Nana Addo should consider Hon. Alfred Obeng Boateng for appointment
To secure our future, we must secure education for our children
Open letter to Franklin Cudjoe
Lack Of Respect For The Court-Jirapa Municipality At It Again!
Kojo Nyantekyi – Tribute To A Brother
Election Reports Quotes Dossiers
TOP STORIES