The God Of Africa Is The Plagiarized God By The Judeo-Christian Faith! 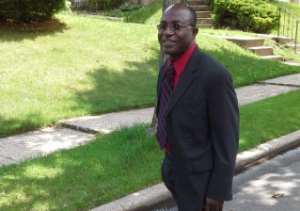 The soul-extinct Reverend Kusi Boateng is subconsciously demonstrating his lack of the profound understanding of the Bible. It is sad that such self-appointed Reverends who lack the basic understanding of the Bible, The Divine Word of God has the audacity to denigrate his own people with a grin on his face. Such pomposity demonstrates the epitome of a souless person.

They pontificate on subjects these so-called Reverends lack the conceptual understanding to deal with. In fact, they lack the skills and the training to talk about the subject matter hence they ignorantly put themselves up in the public domain to redicule themselves.

The soit-disant Reverend Kusi Boateng posits in a publication online through the Ghanaweb.com published on August 5, 2018, entitled, " Ghana Does Not Need A Shrine". And he goes on to rant, " If you want a National Shrine too, let's see what the shrine has contributed to the development of Ghana? What have those worshipping gods have done for Ghana? What is their percentage?

OH! THE POTENTATE OF AFRICA, THE AMEN, FORGIVE HIM OF HIS IGNORANCE! The whole percentage of Africa and the Judeo-Christian world worship The Amen, The Hidden One.

This writer posits that the God of Africa, known as The AMEN, The Hidden One is the God of the Judeo-Christian Faith. It must be emphatically pointed out that the word, Amen is neither Hebrew, Greek, nor Aramaic. It is the Divine name of an African Potentate Entity who is the True

and Faithul Eyewitness to the creation of the universe. (Revelation 3:14)

At this juncture, the writer is going to use the internal evidence of the Holy Bible to prove his in disputable point.

The African Entity, called The Amen was first used by the student of African Theology called Moses in the Hebrew Torah, in the fourth Book of Moses in the Old Testament, Numbers 5:12-31. Moses, the alumni of Afican Theology in Acts 7:20-22. He was taught in all Sophia (wisdom ) of the Liberal of Arts Curriculum in the Temples in the Ancient Africa (Egypt) and he became Mighty in Oratory (Words) and in works (Magic ).

Moses taught his people in the fourth Book of Old Testament in Numbers 5:12-31 about the Potentate Powers of the Amen, the God of Africa who is the most

Powerful Entity to help his people to figure out the guilty one among them by the mere mentioning of his name three times.

Anyone who cares about critical thinking skills by posing the question where, what, who, and why can google on the Internet and can search the web posing the following questions: 1. Where was the name Amen first used? 2. Who was the first people to use the word Amen? 3. What was the original meaning of Amen? 4. Why was the word Amen used?

The word Amen which is a proper noun appears in the Torah, the Hebrew Bible, The Old Testament of Christians thirty (30) times and in the New Testament forty-three (43) times. The name, Amen does not mean let it be in Hebrew, and it does not mean Truly or Verily in the Original Greek New Testament. The Judeo-Christian Faith have tried to conceal the African Potentate Power of the Amen but they have miserably failed in their efforts. Nobody can conceal the Amen from Africans anymore.

Jesus Christ Himself swore on the African Potentate, Amen several times in the Gospels whenever he wanted to place a strong emphasis on his sermonns or teachings. In the Gospel of Saint John chapter 10:1-7, he began his sermon in the first verse saying Amen, Amen swearing on the name of the African Potentate that what he was about to say is powerful. The word Amen does not mean, verily or truly as you have been fooled to believe. It is about time Africans start to think for themselves.

The writer insists that the The King James Translation of the Bible is the poorest work given to Africans and you subconsciously love it and sheepishly claim it to be divine which is far from the truth. The Translation which is lesser evil is the Revised Standard Version; however, this version has also consciously concealed The Potentate African Entity, Amen in the Bible.

In fact, the Bible tells us who the Potentate Amen is in Revelation 3:14.The Amen is the faithful and Truful Eyewitness to the Creation of the Universe. And it must be vehemently pointed out to the soul-extinct Reverend Kusi Boateng that the God of Africa, The Potentate Amen is the plagiarized God of Judeo-Christian Faith and the current writer is ready to debate him anywhere at any time including any of his proponents.