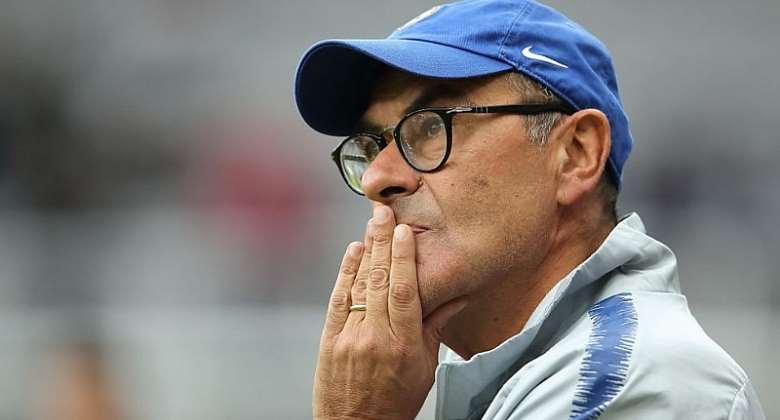 From an African perspective, the appointment of Maurizio Sarri by Chelsea turns out to become a bit complicated. Victor Moses, a winger by trade was deployed by Antonio Conte in a wing back role, a role the Nigerian reveled in.

Antonio Conte would later on, during an interview with Gazzetta dello Sport opine that, “Moses has great quality, technique, physical strength and the ability to cover 70 metres of the pitch. I find it incredible that somebody like him could have been underrated.”

Moses was a vital cog in Antonio Conte’s machinery and his input in ensuring that Chelsea lifted the English Premier League and the F. A Cup trophy during Antonio Conte’s turbulent reign cannot be underscored.

However, Conte was shown the exit door by Chelsea and he was replaced by Maurizio Sarri. Sarri isn’t an advocate of the usage of wing backs and this has plunged the future of Victor Moses into considerable amount of doubt.

Victor Moses isn’t an out and out right back and with the abundance of wingers at Sarri’s disposal, it is difficult to see how integral Moses is to the plans of Chelsea’s new gaffer.

Maurizio Sarri seemed to have kept the doors at Chelsea F.C open for Victor Moses. During the press conference prior to the 2-0 defeat of Bournemouth, Sarri said “Because he [Moses] changed the position on the pitch. In the last season, he played in the five, now we are trying to get him to play as a winger. We changed the position and in the new position, he needs to improve. It is only a matter of time, I think”.

Chelsea is blessed with talented wingers such as Eden Hazard, Pedro Rodriguez, Willian Borges and Callum James Hudson-Odoi. Hudson-Odoi offers Chelsea a more direct approach due to his ability to take opposing players on.

Victor Moses has his qualities but it is extremely difficult to see him making his way into the Chelsea starting line-up. As a winger, Moses comes up a little short of his competitors.

However, in the defensive phase, Victor Moses offers much more. On the contrary, “Sarri-Ball” doesn’t require so many defensive oriented players since the playing style is pro-active and utilizes a high pressing system, which is more collective rather than individual centered.

Claiming a starting berth during Conte’s tenure after spending so many seasons on loan, it becomes heart-breaking to see Victor Moses’ career reverse in time – he has to get used to being on the substitute bench again.

Four games [360 minutes of football] into the season, Victor Moses can only boast of having featured for a paltry eleven minutes under Sarri’s Chelsea.

This is football and most often than not, there are always casualties when a new manager comes in. Will Victor Moses stay on to “fight” for a place in the squad or will he look for a new challenge elsewhere?

With Africa’s limited number of world acclaimed football stars, it will be unfair for Africa to see one of their finest players settle for a bit-part role in his club.

As the season progresses, we can only hope that Moses finds favor in the sight of Sarri but if such favor isn’t forthcoming, it is only apt that Moses seeks a move away from Stamford Bridge to ensure that his career doesn’t plummet.

PRINPAG goes to the polls on August 12 to elect new executiv...
17 minutes ago