Of The Cathedral; Misplaced Priority And A Debilitating Weaponry 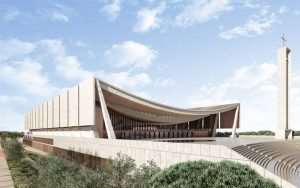 The murmuring is worth it, but the exuding spiel from those who deem it ought to be hewn out may sound circuitous if their proposal is viewed in a broader context. This is Ghana’s sixtieth realm of self reliance, thus it should rather mean that we must have reached the level of growth where citizens should not be agitating for Ghana-beyond-lacking-basic-social-amenities!

The internet never forgets; it reminds us that most of the developed countries in the world had built a Cathedral with no conflicting purposes, and I repeat, "With No Conflicting Purposes"! Germany had its Cathedral located at Cologne and there is St Paul's Cathedral Church located at London, the list would be long if I do not end here. Let us stop calling the old man’s spoon a spade. I ask, did the foreigners rant about theirs when their government had wanted to construct a cathedral, No! Because the citizenry knew that the State had done what is necessary. Anyway, it looks meaningful on the face of Africans' perdurance of copying blatantly and awkwardly from the white man; we copy 30% of what they do right and copy 70% of their wrongs. And for that matter the underdeveloped economy that is still battling with sanitation problem, infrastructure, corruption, also needs a Cathedral, for what! We are still wrangling about its source of funding; whether the tax payer is to be duped again or an outside donor, wherever it may come from money is going to be used and not stones!

We have a caboodle of respected men and women in the religious circles who have added their voice onto the ongoing hot pursuit-debate, but it beseems that some of them are for it. Nine Justices of the Court of Appeal are to be relocated, the Scholarship Secretariat and Passport Office would all be demolished. So the purpose for its inception had gone to naught and the tax payers' money is squandered, all these have not been factored into the argument.

Maybe we want to suggest that the leaders who established those structures were not thinking well or the "Homeless Association of Ghana" should continue sleeping on the streets! If Government think the Judges do not need those apartments, then he should relocate the homeless there or the tax payer money must always be invested in an unfruitful enterprises because they could be taxed anyway! If the demolition takes effect; you see, government and all those in charge must be made to reimburse the money with their personal money to the tax payers’ account, with that they would valorize the amount of money they had turned into dust. Could not we concentrate more about the life of our people and not monuments and synagogues for now? There is accretion of Churches all over and Mosques on the land in which we live in but has it reformed the attitude of the people to suit the dictates of God Almighty? The characteristics of the yet to be constructed National cathedral amid the many needful things which have not yet been done, are so heavenly inspired that the missionary churches and other edifices we have at the moment could not suffice? What about the National Conference Centre, Kwame Nkrumah Museum, National Museum and Independence Square?

Never mind though, a country that believes so much in religion to the ebb that when an egregious mistake is committed it rests on the shoulders of the scriptures and not the individual’s doing. It is a misplaced priority; priorities set of rules in life which show a country’s quest for development. In the health sector, we were told that it heals and saves life, but it has rather deepened wounds and killed many! Today, Korle-Bu Teaching Hospital and Akomfo Anokye Hospital are still under resource, and to talk about the ratio of doctor to patient, it is better not force people to dismay. In modern Gold Coast, a 72 years old man is denied basic health care from almost seven hospitals and he finally passed away because of the “no bed syndrome”. If we have the statistics of the number of people who die as a result of this anomalies and evil syndrome we shall rethink. But we know not and because our family can access better health care at the white man’s land we are not bothered! How many pregnant women do die during child delivery because of lack of basic equipment? What have we been told about the issue of infant mortality rate? Are we aware of the number of abandoned hospitals we have in the country? Some projects started over 20 years ago and had not yet been completed. Our big men keep giving a flimsy excuse that there is no money but is there money to build a National Cathedral? The nature of the roads we have could be well defined as muddy holes which make interlinking the city and the remote places very tedious. Remember recently that the President and his convoy were spotted dangling in the swampy road on their way to the Volta region. We have heard of the political cry since the times that the eastern corridor road would be commissioned, posterity is judging us today. A mere bridge that has not been constructed at Zabzugu had led to the death of a pregnant woman and our spiritual leaders are happy about it because it is only one soul?

Putting up this edifice is another way of rendering the poor compatriot’s privileges into disarray. People from the remote places who travel to Accra to seek greener pasture, at Tema Station, Accra, in the early hours of 4am, are seen sleeping helplessly on the pavements with a long cloth and rubber as a shield to keep themselves away from the rain. They contract malaria, pneumonia and fever in exchange for their 'Hustlers' Ambition'. We cannot blame anybody but poor leadership and mismanagement of resources of the kind. Another damming example is students who have completed senior high with good grades but had no money to continue for the only reason that funds could not be solicited! Have these setbacks been ameliorated? I know you are cognizance that accessing health care is still a turbulent to the ordinary Ghanaian! Patients are sacked from hospitals because the National Health Insurance Scheme [NHIS] still cannot be used to pay certain bills. The annoyances of it is that after the Cathedral has been constructed it would be accessible by only the 'selected few', bigwigs and the maverick men, but the poor girl, 'truck-pusher' and the ‘Kayayoo' would be denied of its use, such is Ghana!

We know government is doing his best to change the image of the system but our priorities must be well spelt so that we will stop making ourselves as a laughing stock if we throng the [IMF] to beg for alms. Some things are needed exigently while others are needless and not important at the spur-of-the-moment! Are we trying to exchange the provision of basic necessities to the construction of a cathedral, does it tally or we must blame the gods again? If Jesus's second [as] coming is today he knows very well that Ghana does not need a Cathedral but needs basic amenities! If it is true with what has been reported that in the erstwhile administration of the late President Mahmud Gaddafi of Lybia, that his citizens after completing University were given some stipends or motivated to enter into entrepreneurship then it is worth emulating and laudable!

The construction of a Cathedral has made it clear that we know the right things, and the 'money-is-there' but we have reluctantly decided to redirect our resources to things that are not needed at this time. We need to work on our sanitation project for open defecation to be a thing of the past. In this century, our economy is still encouraging public toilet in almost all its advanced cities, and we are been forced to believed that Ghana is aiming to go beyond aid! The aid that come, what have we really used it for? Children who need to be at school are now working with the "Beggars Limited" to keep their head above water. We should come together with the Cathedral money and provide a better livelihood for them, and that makes sense!

Imaging government's perspicacious act to demolish all the building within the enclave of Ridge, if that same energy is exerted to build more schools to tackle the cantankerous population growth of students into the senior high after the institution of the free education, we could have had a free flow of tuition. And as it is believed, if the funds solicited is used to provide hospital resources, build roads, or machines for the poor farmer to increase his produce and farmland, would we be boosting importation? Hostels could be built and given to the homeless at a reduced rate or free for our sisters from the Northern peninsular anytime they come to Accra to transact business so that womanhood is credited its rights!

As we are all rattling about the death of entrepreneurial skills of the youth of today without talking about the impossibilities of accessing loans from the banks as a fresher without no collateral. These funds could be could be spread across to at least 50000 youths who are ready to start something on their own and that would revolutionise entrepreneurship and reduce the unemployment rate!

Ghana; your Cathedral would be needed the day that you shall be able to transform your economy to shoulder with the economy of Spain, United Kingdom, America, because its citizens where enjoying the basic necessities of life before the State dreamt of building a cathedral.

Some of us do not buy into the idea of Ghana is broke albeit we are not financial excepts; the money is there but the usage is the problem!

The case is not rested!
© Abdur Rahman Odoi Anum Pobee