A Promised Cathedral; A Misled Dog! A Misled Country!!!! 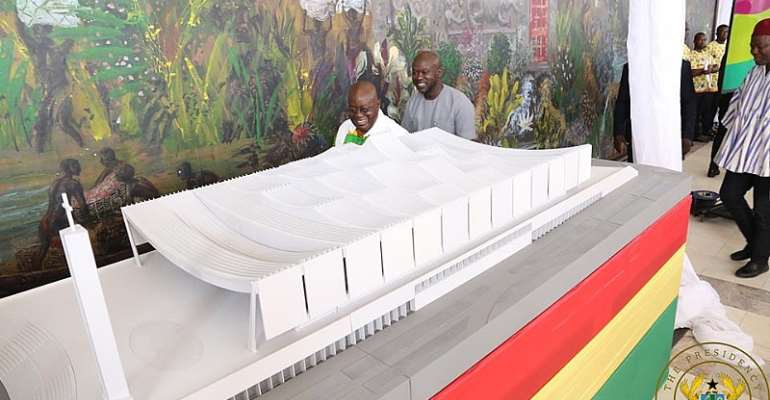 "Nyansa fuooeeeeeee, mo wo h333eeeeeeeeeee....?" Pondering over some sad developments in our country, I am only left with the above borrowed question from the former Moderator of the Presbyterian Church, Prof Emmanuel Martey.

Indeed, no reasonable being anywhere? Not even amongst the Akufo Addo's claimed "first class team" to advise him appropriately on the Cathedral project?

This is a project that has succeeded in sealing the lips of some of the critical clergymen to the extent that the ills and excesses of the current regime cannot be 'seen' let alone be talked about.

The Bible admonishes that one must first do what is most important before engaging in others. In this case, bread and butter issues; access to potable water; basic health care etc are the needs of the ordinary Ghanaian.

In 1 Chronicles 28:3, when King David, a man who virtually became known as a friend to the Lord, elected himself to construct a place of worship for the Lord, he was told by God to be unfit to do so. That is even King David.

Now, not confounding the way the project is being executed? Contrary to a normal construction procedure, a sod cutting ceremony was done in 2017 and that was followed a year later by the unveiling of the project plan.

From the look of things, we might just have in 2019 an outdooring of the person(s) behind the sketching of the project plan. Confounding? Not?

But the 'senseless-ness' of the decision has been attracting some harsh criticisms from members of the public.

Samson Lardy Ayenini for instance puts out on Newsfile "I ask why we cannot find land in Accra for it but to embark on demolition of all buildings [sited] from the Ridge Circle to the Scholarship Secretariat, the Judicial Training Institute at East Ridge, the Passport Office and other structures?

That’s a long stretch and vast acres of prime land hosting many expensive buildings. That’s the area that hosts about ten six-bedroom bungalows built only five years ago by the Judicial Service to house Court of Appeal Judges. The many residents including nine Judges have been served quit orders to vacate the area immediately.

The Government has rented alternative expensive bungalows for the Judges to relocate temporarily while it begins construction of over twenty new bungalows on a different land in replacement for what it is going to destroy to make way for the cathedral. Lands Minister Peter Amewu further assures those affected that lands will be found to reconstruct the institutions to be destroyed in this area."

For me, that we cannot effectively provide accommodation for Judges but had to pull down what has been provided by others few years ago including key office structures and institutions to make way for a 5,000 seater capacity Cathedral is worrying. It speaks to our set priorities and why our country is what it is.

More worrying is the silence of the clergy, particularly the concerned ones. Knowing the developmental needs of our country, I feel some members of the clergy should be the first to offer alternative solutions since 'the mad dog' is only going to realize he was misled much later after the decision as happened in AMERI case.

One huge challenge the project could present if undertaken is vehicular traffic. Very critical by-passes and access roads in and around the Ridge passport office including Gamel Abdul Nasser Avenue, Forth Avenue, Modibo Keita Close and Haile Selassie Street already look badly threatened in terms of accessibility and could compound traffic situations in that enclave and possibly beyond.

Who really needs a Cathedral? Crime today in our society is on the ascendancy, marriages are collapsing, indiscipline in our society is at worrying levels, glaring despair on the faces of many but most of the perpetrators of the crimes and or the victims are in their homes, markets, ghettos etc and should not be expected to throng fanciful Cathedrals but rather be reached in their locations in an effort to win souls for Christ.

The question on the lips of most Ghanaians is of all the lands including the virgin areas in Accra, why that particular land? What becomes of the constant talk to “decongest” main Accra by relocating some establishments to outer suburbs and new areas of the capital?