Is NAGRAT A Serious Teachers’ Organization? 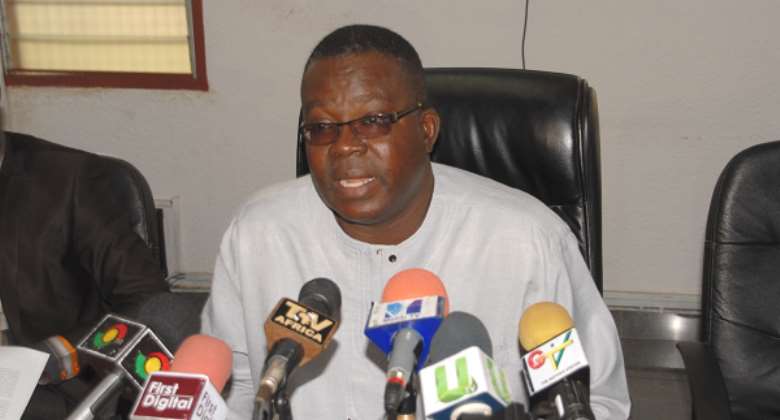 I have been following the debate on the introduction of the double track system in high schools for the 2018/2019 academic year. According to the government, the system is being introduced as a response to the increase in the enrollment of students into existing high schools. The program creates a calendar of two semesters in a year for the Senior High School (SHS) 1 class, containing 81 days per each semester and 41 days of vacation for a sandwich class.

Among other options, the government chose the system to absorb all qualified students into high schools; reduce class sizes; increase teacher-student contact hours and also to utilize existing facilities to the maximum. The policy would only be applicable in schools facing infrastructure challenges due to a large number of students admitted under the free SHS program.

As to be expected, criticisms of the program have come from various organizations, political parties and some individuals.

Prof Addai-Mensah said: “This measure we have taken may solve the problem for some time. We shouldn’t look at it as a permanent solution. We should go back and sit at the drawing board.” The Former General Secretary of Christian Council, Rev. Dr. Opuni- Frimpong, believes those rolling the program must be legacy-minded and dared the government to implement a system they will honestly want their relatives to go through as students.

Both the Ghana National Education Campaign Coalition (GNECC) and Dr. Steve Manteaw, Campaign Coordinator of The Integrated Social Development Centre (ISODEC) want the government to have meaningful stakeholder consultation before its implementation.

These criticisms range from caution through condemnation and request for suspension. None of them is bothered by the fate of the children involved. Whether we like it or not the Government has implemented free SHS and in the process it has come to a point where space is needed for the enrolment of some additional 200,000 students two months to the beginning of the 2018/2019 academic year, hence the resort to the double track system. This is the crux of the matter.

In the middle of a “storm” GNECC is calling for “piloting” while the National Association of Graduate Teachers (NAGRAT) is throwing tantrums on the Ghana Education Service (GES) to "suspend the policy intervention in its entirety” and do a wider consultation of stakeholders.”

I am particularly worried about the position taken by NAGRAT concerning the introduction of the double track system. I wish they had come out with an alternative. For how long should the policy be postponed. What would they do to the almost 200,000 students involved? Are they saying that because they were not consulted the future of those children should be thrown into the wind? Would they do that if the students’ last names were Nkrumah, Busia, Limann, Rawlings, Kufuor, Mills, Mahama, Addo or Carbonu?

I am surprised that a union of professional teachers would come out with such a dumb suggestion when the very existence of NAGRAT is dependent upon the availability of students in schools. One thought NAGRAT would jump into the heavens on hearing of the announcement and implementation of the policy since the relevance, sustenance and/or their very existence is dependent upon the success of the very policy they want suspended

It must be noted that policy initiation and implementation are not the same. Most invariably it is the prerogative of an employer to initiate a policy and decide to consult or impose its implementation on its workers. It is not mandatory that a trade union has to be consulted especially in policy initiation. Information not consultation before implementation of a policy may be the option. The main concern of a trade union is how the new policy would affect its existence and the safety of its members.

It is very strange that NAGRAT as a trade union would want its employer, Ghana Education Service (GES) and for that matter The Ministry of Education to “have a wider consultation” before implementing its new dual track system in the education field other than that then "suspend the policy intervention in its entirety”. The ministry is not mandated to do that so NAGRAT should go ahead to advice its members “to work according to their conscience”

In another nauseating if not annoying development, NAGRAT is saying its members would not work on weekends to support the free Senior High School (SHS) double track system “because it is against the Labor law”. According to NAGRAT’s General Secretary Frank Dadzie, although it supports the system, it will not be right for its members to work those extra hours because it is against the Labor law. Really?

Is it not members of this same NAGRAT who use GES’ facilities to organize fee-paying extra classes on both weekends and after school hours? When did this change? When was the last time they paid user-fees for the facilities? Probably NAGRAT would have to shelve its confrontational/political attitude and open its eyes to reality to avoid being caught up in accusation of double standard and lies.

If the eyes of NAGRAT’s leadership were not covered with political glaucoma, they would see the double track system as an opportunity to increase its membership and use same as a trump card to bargain for improved conditions of service. A responsible union of teachers would work with the government for the success of its flagship free Senior High School (SHS) program and “demand blood from its ((the government’s) hairs”

As written in 1 Kings 19:18: “I have reserve seven thousand in Israel, all the knees that have not bowed to Ball and every mouth that has not kissed him”, NAGRAT should be informed that. thanks to NABCO there are over 40,000 graduate teachers who are yet to be employed. I would encourage NAGRAT to follow its resolve with threat of resignation, they would not be missed.

It would be foolhardy to expect a politician of Nana Addo’s “timber and caliber” to even think of postponing let alone abandoning the double track system for the free SHS program at this time. He would be committing political suicide. This can only happen over his dead body. NAGRAT needs to be serious for once!