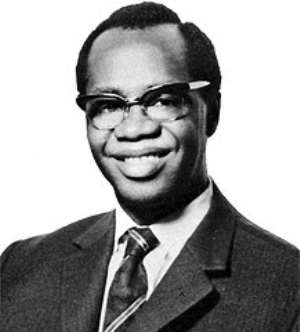 A public lecture to commemorate 40th anniversary of the Prime Minister of the Second Republic of Ghana, late Dr. Kofi Abrefa Busia will be held on Tuesday, August 28, 2018 at the Accra International Conference Centre (AICC).

The lecture, which is to remember the enormous contributions of Dr. Busia to national development, will be used to outline some important achievements of the late Statesman and for the Ghanaian youth to learn about the country's forefathers who set the pace for Ghana.

The Special guest of honor for the event is President of the fourth Republic, Nana Addo Dankwa Akufo-Addo.

Dr. Busia was Prime Minister of Ghana from 1969 to 1972 and believed in the principle of discipline.

In one of his interviews before his transition, he admonished Ghanaians to inculcate the habit of discipline by not wasting money and government assets.

Dr. Kofi Abrefa Busia, as a Prime Minister and a nationalist leader in the Second Republic, played an integral role in the restoration of civilian government following a military rule.