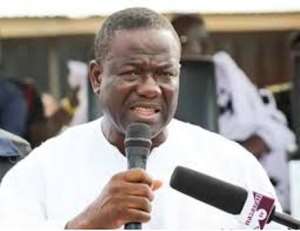 Mr Kofi Dzamesi, The Minister of Chieftaincy and Religious Affairs has appealed to traditional rulers to support government in the fight against 'Galamsey' (illegal mining) activities in the country.

He reiterated that the government's fight against illegal mining was to prevent the wanton destruction of the environment, particularly water bodies, the vegetation cover and other natural resources for sustainable development.

Mr. Dzamesi made the appeal when he paid a working visit to three traditional areas; Kenyasi Number One, Kenyasi Number Two and Ntotoroso at a joint meeting of the Paramount Chiefs and their elders on Thursday at Kenyasi Number One in the Asutifi North District of the Brong-Ahafo Region.

The visit among other objectives enabled the Minister to assess the situation on the ground since the ban on 'galamsey' operations last year by the government.

The three traditional areas, with seven other communities are chiefly hosting Newmont Gold Ghana Limited (NGGL), Ahafo Mine and the commencement of the Mine's operation made the area susceptible to 'galamsey' activities which became a threat to its smooth and effective operations.

He entreated the citizenry to strictly adhere to the country's environmental laws and policies which were designed to improve the surroundings, living conditions and the quality of life for both present and future generations.

Nana Kwadwo Agyenim Boateng, a member of the Council of State who was among the Minister's entourage said scientific studies had shown that, small-scale mining, especially the 'galamsey' exposed mining communities to toxic metals such as mercury, arsenic and cyanide.

These, he said contaminated water bodies and the soil matter for farming and consequently the quality of food stuff produced was affected.

Nana Boateng added the unscientific method of using the toxic metals also caused the release of inorganic mercury into the atmosphere and when inhaled might lead to acute poisoning that could cause dizziness, headaches, memory and speech loss.

Mr. Charles Bissiw secretary to the Inter-Ministerial Committee on Small-Scale Mining said the temporary ban on it was necessitated by the activities of illegal miners who were destroying the country's vegetation cover and water bodies.

He said the government took that measure to implement more sustainable policies to guide and streamline the activities of small-scale mining in the country.

Nana Osei Kofi Abiri, the Paramount Chief of Kenyasi Number One, earlier in a welcoming address on behalf of the other Paramount Chiefs appealed to government to seek the consent of the traditional authorities before granting concessions to mining companies.

He pledged their commitment and unflinching support to government in her effort to end the illegal mining activities in the country.

Akufo-Addo Extends Partial Lockdown For Another Week
51 minutes ago