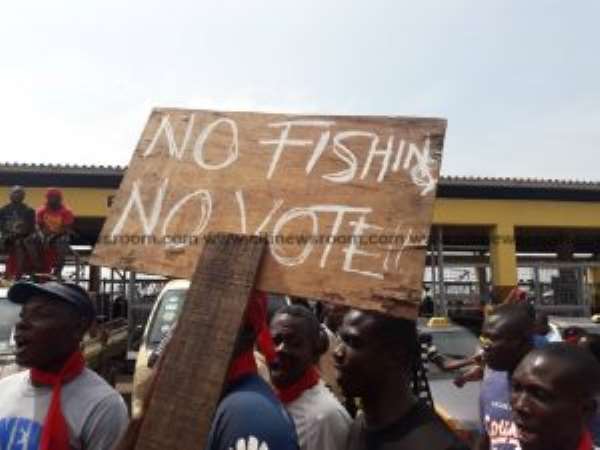 The Ghana National Canoe Fishermen Council has threatened to sue the Ministry of Fisheries and Aquaculture Development over plans to ban fishing activities for the whole of August 2018.

The Association insists the ban should be postponed to next year [2019].

Government has imposed a ban on all fishing activities effective Tuesday, August 7 to September 4, to help restore the dwindling fish stock.

Speaking to Citi News, a Member of the Ghana National Canoe Fishermen Council and Chief Fisherman at Jamestown, Nii Kai Okaishe III, said the government must rather deal with the illegal methods of fishing.

He said the fishermen council will oppose the move through a lawsuit.

“We are going to take legal action against the Ministry of Fisheries and Aquaculture for stopping fishermen from going to sea. The month of August has since time immemorial been the month in which we get a bumper harvest, but these days it is not so because of the illegal activities going on in the sea. Too many canoes chasing the fishes, and too many fishing trolleys chasing the fishes.”

Some fisher-folk at James Town and Chorkor in Accra have told Citi News that the ban must not be implemented because it will affect them and their families.

“I make between GhC100 and GhC500 daily. I can't do any work but fishing; I have been doing it since childhood. I have been a fisherman for 46 years and have never witnessed a ban on fishing activities. We are against it,” one of them stated.

Another said that if the government should ban fishing, he will not be able to take care of her family.

“I have been doing this work for forty years. This is how I am able to cater for everyone in my family. What does the government expect me to do when the ban is imposed?”

In the Western Region, the fisher-folk have demonstrated against the intended ban. A similar protest which was to be held in Accra, has been put on hold due to an expected response to their concerns from the government in the coming days.

In 2017, the co-convener of the Fisheries Alliance, Richster Nii Armah Armafio, said that the Fisheries Commission was working with the implementers of the Sustainable Fisheries Management Plan Project to bring a halt to all fishing activities for one month this year.

The reason given at the time was that such an act would help in the regeneration of fish stock in Ghana's fishing waters.

“Scientists are telling us that Sadinella stocks are pregnant around August and so if you have observed when you get them, they have a lot of eggs in them. The idea is to allow August to pass so that they will lay their eggs for the juveniles to go into the wild. The adults will then be available for capture.”

“You need every fish to spawn at least once to keep the cycle going. If we want to restock our fisheries, we need not disturb the spawning process.”