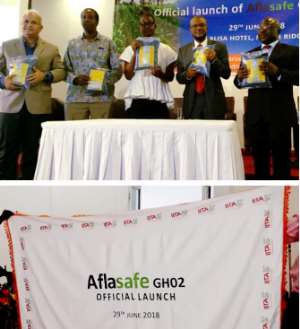 Aflatoxin takes a heavy but hidden toll in Ghana, as elsewhere in Africa where people primarily eat – and depend upon – maize and groundnuts. These two crops, staples on many tables, are also the most vulnerable to aflatoxin contamination. The crunch is that aflatoxin is difficult to detect even when at lethal levels. Measured in parts per billion (ppb), this naturally occurring poison is tasteless, odourless and invisible to the naked eye: one ppb is akin to a single drop of water in an Olympic-size swimming pool.

Despite its invisibility, aflatoxin not a new topic in Ghana: it hogged the headlines in August–September 1998, sparking heated debate on kenkey causing cancer. This shone the spotlight on aflatoxin in food, leading to surveillance studies in maize and groundnuts, and products made from them. Some of these studies revealed levels approaching 4,800 ppb – far above the safety thresholds set by the Ghana Standards Authority of 15 ppb for maize and 20 ppb for groundnuts. These alarming levels clearly demonstrate that a majority of Ghanaians are unknowingly exposed to unsafe aflatoxin levels in the food they eat.

But Ghana is not alone. Aflatoxin is the culprit in at least 30% of liver cancers in Africa. The continent loses hundreds of millions of dollars each year in foregone export opportunities due to aflatoxin contamination.

What is singular about Ghana is how long the problem of aflatoxin in food has been known. “Aflatoxin was discovered in 1960 in the UK and the first published report from Ghana was in 1964,” revealed Prof Richard T Awuah of the Kwame Nkrumah University of Science and Technology (KNUST), in the keynote address. “Whether or not the product will be successful in Ghana will also depend in part on the publicity and perceptions we Ghanaians give it.” Clarifying that Aflasafe was not a genetically modified organism (GMO), Prof Awuah stressed the crucial role of the government and the media in shaping public perceptions and in creating awareness. He was closely involved in the development of Aflasafe GH02. 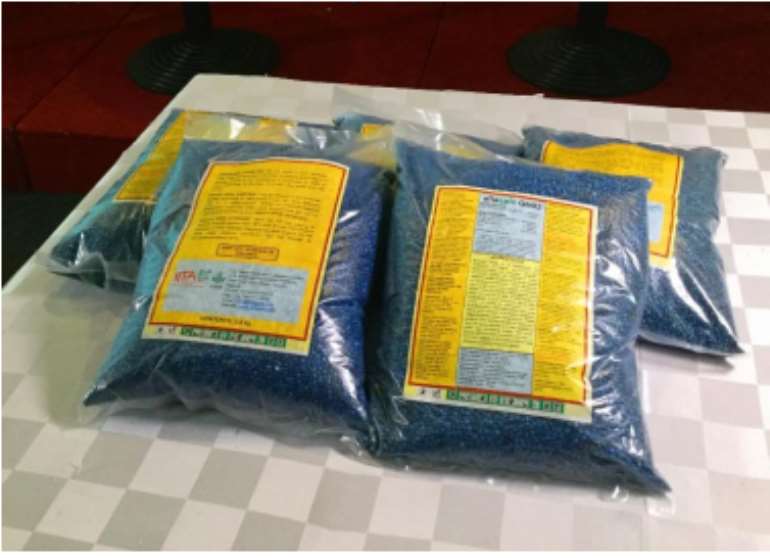 Look out for these packs! All-natural Aflasafe GH02 is mostly sorghum by weight (over 99%), coated in friendly Ghanaian fungi that crowd out the aflatoxin producers. The sorghum keeps them going while they are getting established, and maize starch keeps them glued to the grain. Finally, blue dye distinguishes it from the sorghum we eat, and gives Aflasafe its distinctive bright colour.

Representing the Minister for Food and Agriculture, Dr Owusu Afriyie Akoto, Mr Harry Blepony, the Deputy Director of Crop Services in the Ministry of Food and Agriculture (MoFA), clarified that there was no lack of policies on aflatoxin. But he decried the lack of awareness on aflatoxin, particularly at the grassroots, and the need for evidencebased information. “When people see how hard aflatoxin hits them, they will take it seriously. Aflatoxin is a ‘slow poison’ – language that Ghanaians understand well. Aflasafe GH02 will be a big relief for Ghana’s food chain.”

Applied whilst the crops are still in the field, Aflasafe‘s four friendly fungi displace the aflatoxinproducing moulds in the field by simply first occupying and ‘colonising’ the space these poisonproducers would otherwise occupy. Aflasafe was developed by the International Institute of Tropical Agriculture (IITA), in collaboration with the United States Department of Agriculture – Agricultural Research Service (USDA–ARS) and KNUST.

When properly used, Aflasafe prevents crop infection and contamination, reducing aflatoxins by between 80% and 100% in maize, groundnuts and sorghum. With just 4 kilos of Aflasafe, a farmer can effectively protect an entire acre of maize, groundnuts or sorghum, and thereby meet stringent international and domestic aflatoxin standards. The result is more income for farmers, and better consumer health for all.

It has been a diligent journey to Aflasafe GH02 in both laboratory and field. In 2015 and 2016, the product was independently evaluated in more than 100 maize and groundnut fields in several districts in the Ashanti, Brong-Ahafo, Northern, Upper East and Upper West Regions.

The results? All the crops from Aflasafe-treated fields were aflatoxin-safe, with an extremely low range falling between zero and 15 ppb. This stood in stark contrast with crops from non-treated fields, whose aflatoxin content ranged between 8 and 939 ppb. The Aflasafe-treated crops met the standards of both local and international premium markets. Large-scale use throughout Ghana would see farmers produce aflatoxin-safe food, and thereby see all Ghanaians win, given the attendant benefits on health and potential wealth.

Approved by Ghana’s Environmental Protection Agency earlier this year, Aflasafe GH02 is now available in the country distributed by Macrofertil.

Currently, Aflasafe GH02 is being manufactured at IITA headquarters at Ibadan, Nigeria, from where it is imported into Ghana. “We are discussing with companies interested in local manufacture in Ghana,” revealed Mr Abdou Konlambigue, Managing Director of IITA’s Aflasafe Technology Transfer and Commercialisation initiative (ATTC). Aflasafe is also available in five other countries in Africa to date.

We’ll Resist Attempts To Use BOG’s Funds To Finance NPP’s El...
6 minutes ago

Obinim To Pay GHS1.6m Tax Liability; Court Throws Out His Ap...
45 minutes ago