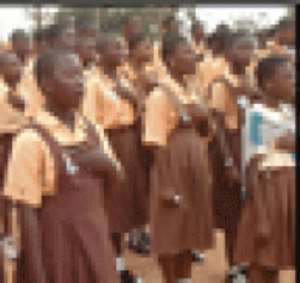 In schools sexual involvement of a staff person with any students, regardless of age, is prohibited by school policy, teacher registration rules, and national laws.

Government, parents, opinion leaders, stakeholders, NGOs, etc. Are all putting in an effort to ensure that all Ghanaian children are in school, obtain acceptable societal values, come out as a successful and responsible citizen, and to add up to the human capital resources of the nation.

But these efforts cannot be realized if the 'sex game' in our schools are not given much attention.

Among the numerous roles of a teacher, one of the most basic being to set an example to his or her pupils and in fact to all who think of him as a teacher. Parents often expect him or her to be a better model of behavior for their children than they are themselves. Generally, the teacher is viewed as a parent substitute; thus in the school setting, there are both mother and father figures expressed in the female and male teachers respectively.

Every parent entrusts his or her ward into the hands of teachers with the hope that, the transmission of knowledge, skills, values and positive behavioral changes will be materialized through the teacher's competence. But as the popular saying goes "a poultry farmer doesn't go the market to buy chicken", some teachers do not see the need to look beyond their school environment for their 'sexual taste' but rather, make 'good' use of their own students...

There is no doubt about the fact that sexual abuses occur in almost all of our educational levels in Ghana and about 80% of teachers maybe guilty of this immoral act.

Sadly, teachers who are considered as the custodians of knowledge, socially acceptable values, moral competence, cultural values among others qualities and are mandated to impact these qualities into the younger generation within the classroom, it is now being happening in hotels, vehicles, teachers or students hostels, and sometimes in classrooms. Many of such incidents can be cited but.....

IS THIS 'SEXUAL GAME' A TEACHERS CONDITION OF SERVICE?

I don't think so......... BUT SHOULD WE BLAME THE TEACHERS? Sexual extortion in Ghana schools may be as a result of the following;

#Parents entrusting their wards into the care of individual teachers without any background checks.

#lack of sexual discipline on the part of some teachers

#financial problems can influence students to fall for their teachers

#immoral behaviors of some students #lack of stiffer punishment for teachers who are involved in such acts by authorities.

This 'sexual game' in our schools of all levels is a NATIONAL EDUCATIONAL CRISIS which needs serious attention!

The effects of this sexual harassment are the upsurge in indiscipline, pregnancies, school dropouts or dismissal from school, lack of respect for teachers, falling academic performance, etc.

In solving this canker, I suggest the following measures should be put in place to curb the menace:

#journalist, especially undercover investigative journalist such as Anas Aremeyaw Anas and other prominent investigators, should be equipped and task to unveil this act in schools

#parents should be responsible towards their wards by providing for their basic needs, and not entrusts them in the care of individual teachers.