Our Anas And The Making Of Ken Agyapong 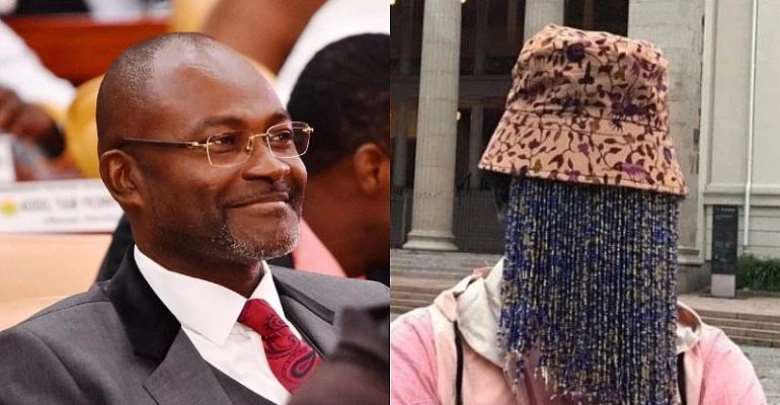 Let me reiterate my position here; I absolutely support Anas Aremeyaw Anas and his investigative work – those done in the past, and the current GFA shame. I condemn the death threats that Kennedy Agyapong has issued on him (Anas).

I am sure by now we have all seen the shame, and the disgrace that Kwesi Nyantakyi and his men have brought unto themselves. These are people we respect in Ghana. We give them the red carpets, the high tables in churches and in mosques, and celebrate them, but we prosecute and jail common people who steal bread due to hunger.

In our world, it is a common knowledge that Ghana Football officials decide who wins football matches in the country, before the matches are played. So no matter how hard a team plays, the results are likely to have been predetermined. To be promoted to Black Stars, Starlet, Satellite, or any of the national teams, players are alleged to have to pay their ways there, to coaches, to management members, and ultimately to some government officials.

Anyway, while at it, I do not want us to ignore the issues Ken has raised against Anas; extortion, and blackmail. So far I am happy with what Kweku Baako has done; he has succeeded in refuting most of the allegations Kennedy Agyapong has made.

But this is where I will repeat the call I made last week, that, Anas should not stop at Kweku Baako’s media evidence. Anas should not ignore, or down play those allegations. You must comprehensively exonerate yourself, through the courts, not public opinion, in order to preserve the integrity of the anticorruption campaigners’ community.

Let’s face it, the issue of Journalistic blackmail in this country is real. I am a Journalist. But I have been a victim of blackmail, from a Journalists, even though I am in the same fraternity with them.

A Journalist claimed he had a damaging story about me that he intended publishing on the front page of his newspaper, and that if he went ahead to publish it, I would be “finished”. He therefore demanded that I paid him $300 Dollars so that he could kill the story. He actually showed me how the story was going to look like in print, with the headline “James Kofi Annan Exposed”.

This Journalist waged a blackmail campaign against me, for over a year, bringing one issue or the other, to let me know the reason why I will soon go down, if I did not give him money to give to his boys, to kill the story. It is for this reason, that I could not have ignored Ken’s allegations against a Journalist (Anas), of blackmail, and extortion.

I therefore do not condemn Ken for alleging corruption against Anas. I do not condemn him for his blackmail and extortionist allegations. It is for him, Ken, to prove those allegations, and it is for Anas to exonerate himself, and to seek appropriate redress. The rest of us must insist on having a closure with the two individuals.

I guess I am still going to remain the odd one out, and to ask the question; why are we attacking Kennedy Agyapong for expressing his minority opinion? How intolerant have we become, so that if one does not agree with the majority, then one becomes a villain?

Social justice is not only when there is a popular applauds. Social justice must necessarily be protective of minority views, even if those views are a departure from what is seen to be acceptable widely.

We cannot claim to be social justice activists, but ignore to protect those who carry minority views. The fact that Anas is good in what he does, and helps us unravel corrupt officials, does not necessarily mean that those who have different opinions, or those who do not accept his investigative approach should remain silent. The same constitution that gives Anas the right to practice his Journalism, also gives Kennedy Agyapong the right to disagree with him.

Very often, we seem to want to follow the majority pattern, in order to be trendy and fashionable, with the popular views, to avoid alienation. But of course that is what produces mob actions, instant justice, and street lynching of suspected thieves. If a few people would have dared to be different, we would not have had Major Mahama dying needlessly the way he died.

I get disturbed when, in spite of our enormous education, we still allow groupthink to decide how we respond to issues of national interest. In the lead up to the America’s invasion of Iraq, the American press, especially the television news, kept pounding Americans with graphical reasons why America needed to invade Iraq.

According to Psysr.org, the major news networks in America, put out sensational news almost exclusively on why the Bush administration was justified to attack Iraq. While at it, there were some voices that kept suggesting non combative ways of addressing the issues, but they were ignored, and the war happened. Today the international community is still working towards peace in Iraq.

Anas has caught the thieves. We are all happy. But, like it happened during the outrage around Major Mahama’s death, when I virtually became the lone voice against the manner of arrests of over 50 suspects, and the way we instantly treated them, as though they were already prisoners, beating some while starving others, the truth will show whether the hernia has a hiding place.

Today we have only 14 suspects, out of the 50 we arrested in connection with the lynching of Major Mahama. The rest have all been found to be innocent, and acquitted. What became of the beatings they received? One day, and that day will come, we will all admit that we should have paused to reflect, on the allegations that Ken is making.

Social justice activists must look out for, and respect, and tolerate, unpopular views, even if those unpopular views offends our sensibilities. Respecting minority view is different from allowing criminals to face the law.

Ken has become extremely abusive, virtually threatening and insulting everyone, including his own colleagues in Parliament. That must be dealt with separately, at its own levels. We must not mix the views he is expressing with our perception of him, that he is controversial, and he is abusive.

While I support Anas and his work, and I have spoken profusely about the need for massive state security protection for him (Anas), I equally believe Kennedy Agyapong deserves same levels of social justice protection, for they (Anas and Ken) have both been put at risk, for expressing their views differently.

Anas is definitely a popular investigative Journalist in Ghana, and we all love him. But does that then mean that if a small number of citizens do not agree with him, or have problems with his work, does that mean they should not feel safe to express those dissenting views? Does the expression of opinion not form part of the Journalism that we practice?

Anyway, regardless of what becomes of the ongoing debate, Kennedy Agyapong has succeeded in raising the issue of Journalistic ethics, activists’ moral courage and practice, to our front pages. The investigative Journalism industry in Ghana will not look the same, going forward; there is likely to be a change in ethical approaches, from what we have had in the past – thanks to Ken’s minority views. And Anas himself, no matter how odd he sees Ken’s campaign against him, is unlikely to employ entrapment as one of his investigative methods.