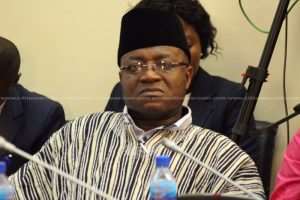 The Majority Leader in Parliament, Osei Kyei Mensah-Bonsu, has criticised the Member of Parliament for Assin Central, Kennedy Agyapong, for his tirades directed at the investigative journalist, Anas Aremeyaw Anas.

He was speaking after Assin Central MP had accused Anas of being corrupt ahead of his documentary exposé on Ghana football.

His disdain for the renowned investigative journalist stems from his dislike for Anas’ clandestine methods.

But the Majority Leader said his fellow MP still has no right to attack Anas.

“If you question his methods, does that mean you should launch a personal blistering attack on the person? Stating emphatically that he is corrupt and so on and so forth. We should be careful, especially us as Members of Parliament,” Mr. Kyei Mensah-Bonsu said.

Kwesi Nyantakyi is said to have used the name of the President, the Vice President and other senior officers of the government to collect money and lure supposed foreign investors interested in establishing businesses in Ghana.

There is a sense Anas relies on unfairly entrapping his subjects and Kennedy Agyapong suspect he may have baited the GFA president.

Mr Kyei Mensah-Bonsu, however, argued that Kennedy Agyapong, who has not seen the video, had no way of knowing how the GFA President was implicated in corruption.

Kennedy Agyapong
“If you haven't done that, how come you are so conclusive that the man baited the GFA President and got him cornered and so on,” the Majority Leader reasoned.

The documentary is set to be premiered in Accra on June 6 at the Accra International Conference Centre.

Anticipation for the Anas' documentary heightened when President Nana Akufo-Addo filed a complaint at the Criminal Investigations Department of the Ghana Police Service after a security briefing on the upcoming expose.

Other GFA officials are expected to fall after the screening of the full documentary.