The Dilemma Of South Africa Prisons 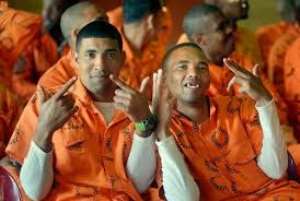 Can there be peace between inmates and officials in the Correctional Centers Of South Africa?

In this article, Rev. Fatuse shares his experience as he tries to help inmates to gain self-confidence; hope, happiness, foster a good relationship between prison inmates and warders and to make a successful transition back to mainstream society.

Fifteen years ago Hans Moleman, a correspondent of the Dutch newspaper, 'De Volkskrant,' wrote on July 30, 2002, about the horrific conditions in Grootvlei prison. Grootvlei Prison is situated just southwest of the city of Bloemfontein in South Africa on Pelissier Drive.

There have been lots of indications that the prison system in South Africa has serious problems. Video recordings were made by a few prisoners with special permission from the prison director, aiming to pinch the corrupt click within the Grootvlei complex.

The band was broadcasted to the public by the broadcaster SABC, hoping to bring a change to the conditions of the prisons. The whole nation could see the unbelievable crimes committed by prisoners on prisoners. The corruption inside prison looks like a never-ending criminal story and prisoners could trade whatever they like. That was fifteen years ago but is there any change?

Staff-prisoner relationships are at the heart of the prison system and a stable prison life depends to a large extent on getting these relationships right, particularly in long-term Medium’s A & B and Maximum security establishments at St. Albans Correctional Centre of Port Elizabeth, South Africa.

Despite their significance, few studies have explored empirically how these relationships develop and operate. Understanding staff-prisoner interactions require a detailed and firmly grounded appreciation of the broader tasks prison officers carry out and the nature of prison officer work.

Staff-prisoner relationships are invested with an unusual amount of power. Previous studies have generally regarded prison staff superficially and critically. The study reported in this article employs a ground-breaking `appreciative/soar' methodology, seeking to allow staff to focus on the best aspects of their work and role, and the conditions in which they function especially well.

Two important features of their work - the peacekeeping aspects and the use of discretion - must be considered in any attempt to describe how staff-prisoner relationships are accomplished. One issue that needs to be understood in this article is - Prison officers must maintain order and daily operations of the facility and are responsible for the care, custody, and control of inmates.

A correction officer has a responsibility to control inmates who may be dangerous, and that society themselves do not wish to accommodate. An officer must always prevent disturbances, assaults, and escapes by supervising activities and work assignments of inmates.

But they should never forget that inmates are human beings who have paid their price in prison not afterward.The objective of the present article is to reexamine with respect to the functionality of maintaining the gap between inmates and staff in the total St. Albans Correctional Centres.

The research has been conducted in 3 Centres i.e. Medium A, Medium B, Maximum and is based on observations, on examination of documents relating to prison regulations and on interviews with prisoners, ex-prisoners and as well as senior staff members.

The findings of the research point to a widespread cooperation between prisoners and staff, which serves the interests of both sides. If there is no good relationship between prison officers/correctional officer and inmates, life would be difficult and administration won’t be easy plus rehabilitation will fail.

Therefore, this matter has to be re-examined carefully and proper precautional measures are implemented to save everyone’s life within the establishment i.e. both inmates and Department of Correctional Services personnel. Note about terminology Prisons/Correctional Centres.

In some jurisdictions, different terms are used to denote places of detention which hold people who are awaiting trial, who have been convicted or who are subject to different conditions of security. In the United States of America, for example, places which hold persons who are awaiting trial at minor courts or who have been sentenced to short sentences are usually described as jails; those holding convicted prisoners are often called correctional institutions.

In the Russian Federation, there are only a handful of prisons, since this term denotes places of detention with the highest security. Establishments for other convicted persons are usually described as penal colonies. Prisoners/Offenders/Inmates In some jurisdictions different words are used for various groups of people who are detained.

The context in which these words are used will be clear from the text. Prison or Correctional Officers They must maintain order and daily operations of the facility and are responsible for the care, custody, and control of inmates. A correction officer has a responsibility to control inmates who may be dangerous, and that society themselves do not wish to accommodate.

An officer must always prevent disturbances, assaults, and escapes by supervising activities and work assignments of inmates. But they should never forget that inmates are human beings who have paid their price in prison not afterward.

INTRODUCTION
In this article I outline the history of research ethics, starting with the issues that arise from imbalanced power relations. The St. Albans Correctional Centers do not typically spring to mind as a place with lessons to teach about humane prison conditions.

For one thing, it is a notoriously volatile and even dangerous institution where severe overcrowding, chronic understaffing, and strict racial divisions rigidly policed by the detainees themselves create conditions ripe for riots, stabbings, where gangsters are ruling the institution and other forms of violence.

This sheer enormity creates almost insurmountable management challenges and makes it difficult to ensure even minimally decent conditions. At the same time, innumerable stresses on the system have greatly diminished the availability of rehabilitative programming, leaving thousands of detainees with no productive pursuits for weeks, months, and even years.

Among other effects, these various structural features combine to make life at St. Albans Correctional Centre stressful and scary, even for those individuals fortunate enough to escape physical harm. This is not a promising place to look for insights on how to make Correctional Centres more humane.

As one would expect from a description of life in jail, several of the listed words carried a negative connotation. These included: “noisy” or “loud” (3 respondents), “nasty” (2), “hateful” (2), “sour” (1), and “depressing” or “sad” (7). But of the negative words offered, only two (“anxiety-producing” (1) and “stressful” (1)) suggested anything of the tension, fear, and the threat of violence one would expect to hear about from people describing life behind bars.

Objectives and key research questions The aim of the present article is to re-investigate the nature and quality of staff-prisoner relationships at St. Albans Correctional Services in this new context, with a considerably higher proportion of Medium A, B and Maximum prisoners, many of whom felt ‘under constant scrutiny’, using the original study as a baseline.

The study also explored in more detail the changing nature of relationships between prisoners. The objectives of the article are as follows:

1. To explore the nature and quality of staff-prisoner relationships at St. Albans Correctional Services.

2. To describe the contemporary prison experience in conditions of maximum security.

3. To explore the role that faith and conversion play in the prison experience.

4. To determine whether anything ‘the prison was doing’ made distant staff-prisoner relationships or prisoner alienation more likely.

Rev. Fatuse's future prospects
WHY REHABILITATION HAS FAILED IN OUR CORRECTIONAL CENTRES?

Can there be peace between inmates & officials in the correctional centers?

"After being with prisoners for many years and understanding their situation I am motivated to start this project and write a book about it because of what is taking place at the moment in South African prisons which drives everyone crazy to such an extent that there is no peace. I will focus on my main topic." Said The reverend.

SITUATION ANALYSIS - A PROBE OF STAFF AND PRISONER RELATIONSHIPS