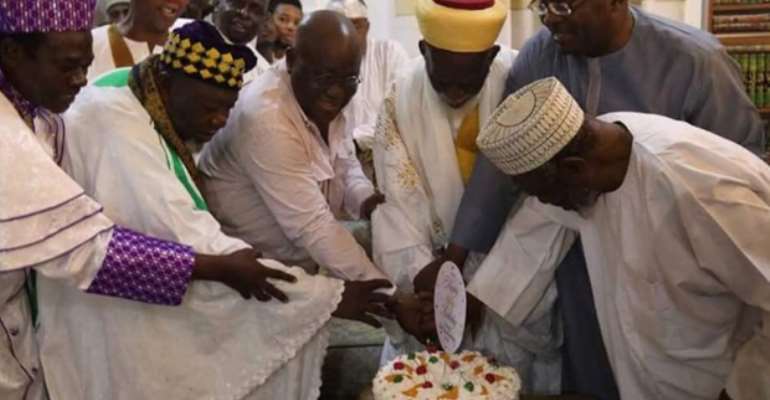 The cleric being assisted to cut the birthday cake

The highlight of the occasion was the announcement by Dr Mahamudu Bawumia that the government had decided to honour the Islamic cleric with the grassing and general face-lifting of the school park, near his residence into what was labeled a community development park, the cost of which is to be charged on the Zongo Development Fund.

The park has also been named Sheikh Sharubutu Community Development Park in honour of the cleric, as per government's directive.

The said park is venue of the annual celebration of the birthday of Prophet Mohammed – an important event in the calendar of the cleric which attracts dignitaries such as the vice president.

Earlier in his remarks, Dr Bawumia stated the importance of the gathering, as he described the National Chief Imam as a national asset who deserved such honour on such an auspicious occasion.

President Akufo-Addo could not agree more to the submission of the vice president when he said that he (Bawumia) had said it all.

He prayed that they all turn up next year to observe the Chief Imam's centenary birthday celebration.

Yesterday's birthday arrangement was the brainchild of the vice president, which he did on the blind side of the Chief Imam.

He (Chief Imam) was overwhelmed with joy at the honour done him during a birthday attended simultaneously by both the first and the second gentlemen of the land.

The government entourage to the birthday celebration was made up of the Deputy Chief of Staff, Asenso Ochere; the CEO of the National Petroleum Authority (NPA) and Minister of Zongo and Inner City Development, Boniface Abubakar Siddique.

On the side of the National Chief Imam were Alhaji Abdul Kadir Tahir, President of the Council of Zongo Chiefs; Alhaji Gado and Dr Mohammed Alhassan, among others.

President Akufo-Addo, Vice President Mahamudu Bawumia and Alhaji Abdul Kadir Tahir, joined the National Chief Imam in cutting the birthday cake to the admiration of others assembled at the New Fadama venue.

President Akufo Addo, the Vice President and the nation were recipients of the cleric's prayers during the celebration.

Talk about yesterday's birthday being an unprecedented one in the life of the Islamic cleric was on the lips of many people long after the president and his entourage had left New Fadama.

Ghana gets 1.5m AstraZeneca vaccine doses from Germany
38 minutes ago