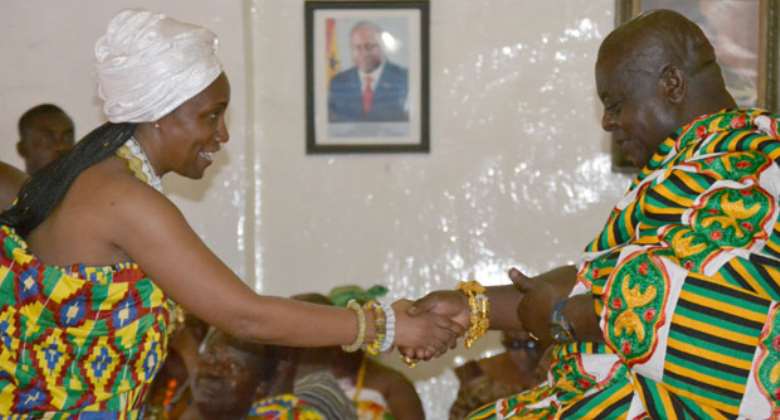 The Chiefs, Queenmothers, elders and people of Aburi in the Akwapim South District of the Eastern Region have held a grand durbar to outdoor Mrs. Virginia Esther Maye Mba, an Equatorial Guinea national as Mawerehemaa under the stool name 'Awo Yaa Afrifa.'

Mrs. Virginia Maye Mba, 47, is the wife of Mr. Gabriel Obiang Lima, the Minister of Mines and Hydrocarbons of Equatorial Guinea, a mother of three and a child and women's advocate by profession.

The Apagyahemaa of Aburi, Awo Abena Adobea II in conferring the honour on Mrs Mba indicated that the title is unique and singularly connected to the very being of His Royal Highness, Otoobour Djan Kwasi.

Awo Abena Adobea II continued that the holder of the title of 'Mawere' essentially falls in the position of providing comfort, support and advice to his majesty on very delicate issues pertaining to the welfare of the community.

“We the citizens of the great Adonten State having carefully followed your track records over a period are mindful that you are more than qualified to ascend this title to join other queen mothers in the state to bring about this desired transformation” she stated.

Mr. Frank Aidoo, District Chief Executive (DCE) for Akwapim South, while congratulating the Mawerehemaa, Awo Yaa Afrifa, indicated that the installation of an Equatorial Guinean or any other is another way of uniting Africa.

“Our doors at the assembly are opened to you, feel at home to call on us just as we will as and when we require your assistance,' he stated.

The DCE who briefed her on government flagship programmes which the assembly was vigorously implementing mentioned “One District One Factory””Planting for Food and Jobs””District Centre for Agriculture, Commerce and Technology “(DCACT) as some of the initiatives .

According to him the district which abounds in a number of natural resources is harnessing these into income generation ventures for the people in an effort to break the poverty cycle.