Is Rawlings Up To Something? 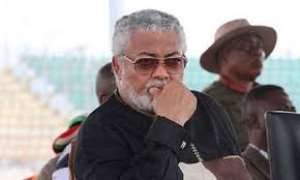 The former president, JJ Rawlings says; he knows security-related power play better than most Ghanaians, including his ardent critics in recent times. That is not surprise. Rather, we will not jump the gun to doubt that. Being former head of state, his assertion fits perfectly into a frog or a toad conversant of the crocodile theory

But if we have to analyze and comprehend the import of the observation of the former president, then we ask ourselves if Ghanaian leadership both national security and political class are capable of using such abominably frankenstein strategy just for electoral profiteering. This statement is the second in series to enforce a previous statement made by him that the upsurge in the recent armed robbery incidents could be politically motivated

Laterally, is noisome paradigm of unpatriotic streak the pursuit of power in all arenas by political stakeholders in all known history. That is, there is thin line between violence and politics in history of mankind. We also know that power corrupts but there are always guidelines or rules of the game drawn from principles acting perpetually as democratic check point to avert political foul play or malpractice. Literally politicians in their quest of power tend to involve in practice that could be described as wishing the "nation evil".

Apparently, they are in the habit of latching on to any misfortunate events in the country to lash at the government. Sometimes, they exaggerate or even rehearse certain events to cause disaffection of the ruling party in other to sway voters in their favor

The accompanying cited instances seem to attest this tendency. The infamous accusation and counter-accusation of bomb attack on Dr. Kwame Nkrumah's life. The mass killing of women in some parts of Ghana prior to 2000 elections is later on revealed to be simulation. Then, also, there was number of bomb scares or threats - as l recall vividly - after NPP pulled out 1992 elections

Those days the reason of the bomb attempt on Dr. Nkrumah's life is nowadays explained, the first president after independence (6/3/1957) literally turned Ghana in family property and brutally suppressed the move to establish multiparty democracy by opponents either by himself or his henchmen

JJ Rawlings on the other hand, was accused of rigging 1992 general elections, of course, ascending power through the barrel of gun, hence the discontent. Those are punishable by law but the bomb scares and the fictional women mass murder were hitherto downplayed and subsequently discarded virtually because the effect is less destructive and damning to the public and image of Ghana

Contemporary elections are known to be won through the polls, earning us the accolade of "STALWART" in the subregion, if not continental Africa

Acknowledging election-related vigilantism and ethos of making the country ungovernable, the electoral rules are simple, fair and transparent to allay fear and undue animosity catalyst for violence. So why will political group or sympathizer risk their careers by robbing, in some cases fatal shooting, resulting in death simply to woo voters to their side?

There are thousands of issues out there that the opposition can use in contrast which will exclude armed robbery for that matter any form of vice to win power. That is why the former military leader's latest effusion is a dilemma at its best

But the peculiar insistence that the recent surge in robbery incident in Ghana could be politically motivated. Despite widespread criticism and condemnation mostly from the members of NDC communication team, a party he founded. A week later the former president remains adamant and reaffirmed his position. This time using his status as former head state as a proof of his knowledge on security matters

A critical look at his "within" insinuating politically motivated incident. Is the former president in a way trying to imply that partisan elements within security setup are behind the sudden increase in armed robbery, fomenting, aiding and abetting the it?

It is very disturbing to envisage political parties executives (especially those in opposition) running armed robbery or death squad for political profiteering, as "without" comment exemplifies

Ironically, instead of holding the current NPP government led by Nana Addo to task on rapidly deteriorating security situation, the former president is shifting the "burden of proof" on those in the opposition

You see, some of us have expressed our concern about the unvarnished expression of delicate national issues openly in "Dr. Boom" style that should otherwise have been dealt with discretion

Hypothetically: Should the former president have any information of sort, wouldn't Ghanaians public that grateful if he should use his enormous behind-the-scene influence to expose the culprits? Personally, l would have been grateful if his information or any other one will help apparently in purging the political class the security hierarchy of the purported nuts

As former president of Argentina, Cristiana Fernandez Kirchner (10/12/2007 - 9/10/2015) goes on trial, accused of coverup in 'Caso Mia, is just epitome of the fact nobody is above the law. In other words, the current NPP government has no excuse whatever not to investigate and come out with finding whether what the former president is saying the truth. And if is true, the perpetrators exposed and dimished