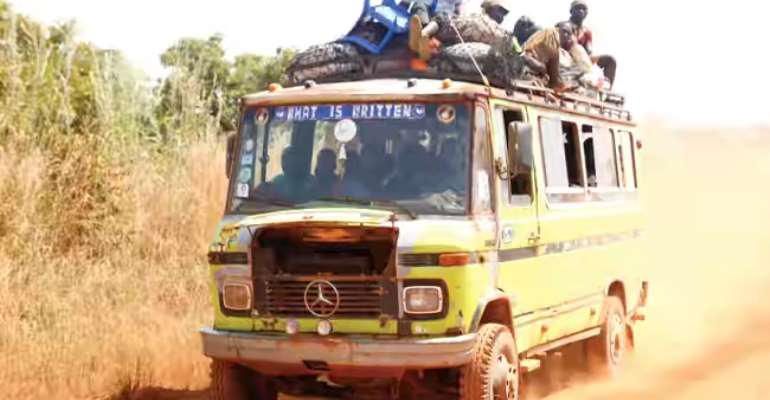 Road transport in Ghana may be categorized into 4 main segments, namely urban, express services, rural-urban and rural. The demand for urban passenger transport is mainly by residents commuting to work, school, and other economic, social and leisure activities. Most urban transportation in Ghana is by road and provided by private transport including taxis, mini-buses and state/private-supported bus services.

Travelling either from Salaga to Kpandai or otherwise, one can only be praying to reach safely. Time is of no essence.

The road which has been worn out to sandy state—no more gravel–emanates breath-choking dust to affect both motorist and communities along, and during raining season, cars have to 'swim' across.

According to the District Chief Executive (DCE) of the area, Mr. Emmanuel Kofi Tatablata, the District would be cut off as a no-go area from the rest of the Northern region if nothing is done to improve the roads before the raining season.

He added, “Kpandai needs the road than Salaga because we need ply that route to our regional capital Tamale.

The road serves as the District’s main link to the rest of the Northern region, yet has been left since its colonial days to deteriorate and threatening lives in the process".

Across the whole District, there is no single tarred road and passengers have had to deal with dust and mud during raining seasons. These usually create deep poodles with Cars getting stuck, leaving passengers stranded.”

Commercial buses travel on the road once a day. And once you miss the early morning wretched Benz bus from Kpandai to Salaga, getting another is by five over hundred chance.

The old buss is usually overloaded with more passengers sitting on its rooftop for the next three hours of hell for the otherwise thirty minutes journey if the road was in good shape.

Kpandai District no doubt has the potential to develop faster with its enviable level of yam production for the country, but for bad roads, the area still remains deprived poor.

For the generally bad state of the roads in the area including those linking the catchment farming communities; the farmers were crying over low price offers for their yams because it take's daring drivers and buyers to venture into certain parts of the area during the harvest.

Some of the farmers said they were facing huge post-harvest losses, on one hand, and poor market for their produces, on the other.

From in-depth group discussion, some of the farmers analysed that it normally costs them GHC2,500 on the average to cultivate or to harvest an acre of Yam. And that acre of Yam could barely produce three hundred tubers.

But last year 110 tubers were sold below GHC100 at Kpandai market and catchment communities. Apparently, an acre of GHC2,500 as production cost yielded below GHC300 as market prices—representing overwhelming losses.