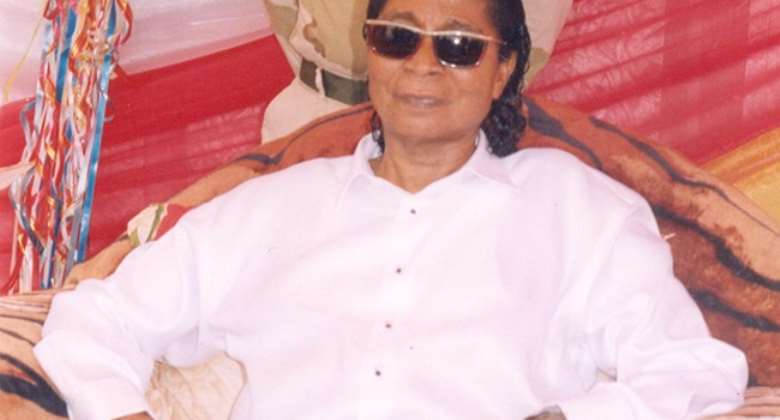 He may have several other names, titles, accolades to his long stretch of accomplishments and social standing, but the most preeminent one many of us know him for is that he is the bona fide founder and supreme leader of the Christ Reformed Church popularly known as “Kristo Asafo.” Of course, we are talking about Apostle Kwadwo Safo Kantanka—aka, “Africa Star”—the proud son of Kensere in the Bekwai traditional area of Ashanti Region . To say that Apostle Kwadwo Safo is a genius is like wasting time and energy hauling a whole bunch of sand to Labadi Pleasure beach. You simply do not take sand to the sandy beach!

Admittedly, I have no idea how the legendary self-reliant Kristo Asafo’s spiritual leader personally and physically looks like except seeing him from faraway in United States on the YouTube and some other media platforms. Besides his seemingly boundless ingenuity and critical thinking skills, Apostle Safo Kantanka is quick-wittedly funny person without traces of cockiness. He is also very articulate using simple Ghanaian language to explain many of his otherwise complex innovations and engineering feats.

Watching or listening to him speaking, the Kristo Asafo’s leader comes across as unassuming human being always brimming with big ideas and practical solutions. In other words, Apostle Kwadwo Safo does not sound like many of those empty-headed, so-called advanced degree holders ceaselessly bragging about their academic exploits either in engineering, agronomy or a host of other university diplomas, yet do not understand a basic thing about innovative farming nor can they put common bolts and nuts together firmly.

We know Ghana roads are dangerously deplorable. Many avoidably fatal auto accidents unfolding on the country’s pseudo highways have unfortunately been normalized as part of Ghanaian social constructs. Although the energy/power crisis (dumsor) has improved remarkably under Nana Addo’s government, the nation is still grappling with ever-increasing prices of the everyday food supplies in the midst of all-year round arable Ghana lands. This perennial development clearly calls for innovative and commonsense food production methods as used by the Apostle of creativity Nana Safo Kantanka.

The foregoing point brings to mind recent conversation a friend of mine had with me regarding the prevailing conditions in the motherland—Ghana. The friend made an interesting observation that unlike the doomsday prophets/pastors mushrooming selfishly all over the place, let us imagine Apostle Kwadwo Safo happens to be (say) the head of Ghana’s roads and highways, or in charge of the nation’s agriculture? No doubt with his immense creative ideas, the carnage on the nation’s roads or the higher prices of vital foodstuffs would be reduced substantially if not eliminated into the dim past. If any loud-mouth Ghanaian doubts this, let that person takes a quick look at everything Apostle Safo has done.

The reality of the situation is that in Africa those with political power—especially—can even move mountains if they want to. But, we know the Apostle of critical thinking and creativity Pastor Safo Kantanka does not possess that raw power. The late famous Kenyan academic Ali Mazrui was once quoted to have said something to the effect that Africa is one of the few places where people with great ideas never given political power but a good many of those without creative ideas always get the chance to have power and run things hence the precarious state of the continent. Just visualize someone like Apostle Kwadwo Safo as a president of a country?

Most likely, one can make a case that one does not have to be in political power to make an impact on the society. Many of us know Apostle Kwadwo Safo Kantanka has already made his mark long time ago in Ghanaian society and even beyond. It is this reason some of us want to extol the Africa Star’s tremendous and unique accomplishments, rather than wait till he is gone as all of us will go one day, before engaging in hyperbolic eulogies as Ghanaians love to do when one passes away.

The sad irony in Ghana and indeed Africa as a whole is that we do not genuinely value or honor the real treasures/icons in our midst except when they are dead. For instance, I did not know there was a famous radio journalist called KABA or a popular singer by stage name EBONY in Ghana till the news of their sudden deaths. Upon the news of their deaths, Ghanaians, as usual, started behaving as if the world is about to end and rolls over.

Unlike the late KABA or EBONY, I have read and learned a great deal about Apostle Safo Kantanka. He is one of rare gem of inventors in African continent. He is in the league with world-class innovators such as Henry Ford, Karl Benz, Steve Jobs, Bill Gates, and many other pragmatic thinkers dead or alive. Let Ghanaians celebrate Apostle Kwadwo Safo Kantanka and other outliers for their unique creativity and high-level thinking while they are here. This is one way we can stop the unnecessary posthumous “honors/celebrations” and the over-dramatized attitudes of shock and awe after a famous person’s death in Ghanaian culture today.

Suffice to say, it is astonishing why most Ghanaians appear so scared of inevitability of death so they “celebrate” the dead more than the living. To that end, it is not surprising that the latter-days Ghana’s prophets of Armageddon have seized on this uneasiness and always “prophesize” of an impending demise to hold people hostage so as to make money off the people’s fears.

In short, Kwadwo Safo Kantanka, Sr., is not only apostle of, and spiritual leader of Kristo Asafo Church, but also he is an apostle of critical thinking, creativity, and job creation, who does not use his apostolic calling to exploit the spiritual insecurities of his fellow human beings. Ghana will be much better place with religious leaders such as Apostle Kwadwo Safo as opposed to the “end-times” spiritual hoaxers living lavishly via the psychology of gloom and doom. I would not be surprised if President Akufo-Addo also takes advantage of the creative intellect of Apostle Kwadwo Safo. Indeed, Safo Kantanka and few other serious innovators deserve true “celebrations” today, because tomorrow may be too late.